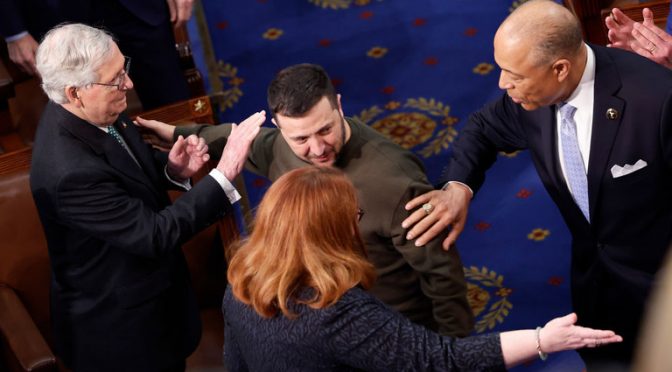 Senate Minority Leader Mitch McConnell makes clear that Republicans will continue to arm Ukraine, regardless of what voters think.

Every now and then, American voters get a reminder that they have no real voice in how their country is run. Mitch McConnell, the top-ranking Republican in the US Senate, made that abundantly clear a few days before Christmas, when he revealed that those constituents who wanted their real needs addressed would again be getting only coal in their stockings.

“Providing assistance for the Ukrainians to defeat the Russians, that’s the No. 1 priority for the United States right now, according to most Republicans,” the 80-year-old Kentuckian told reporters on Capitol Hill while praising the $1.7 trillion spending bill that was then sailing through Congress. “That’s sort of how we see the challenges confronting the country at the moment.”

It wasn’t entirely clear which Republicans McConnell was talking about, those folks he sees wanting — more than anything else — for our government to help kill Russians. He couldn’t have meant the Republicans who are asked to vote for Team GOP every time an election rolls around.

Heading into November’s US midterm elections, the Ukraine crisis wasn’t among the top dozen issues that voters cited as major concerns, according to polling by Rasmussen Reports.

Rather, Americans were highly concerned about soaring inflation, the economy, violent crime, illegal immigration and energy policy. Only one in five respondents considered the Ukraine conflict “very important,” the lowest level among all 16 issues that Rasmussen listed.

More recently, a Gallup poll conducted in December found that less than 1% of Americans see Russia as the top problem facing the US. Respondents were most troubled by their own government, inflation and the nation’s sputtering economy.

The public’s growing indifference about the Eastern European crisis shows, yet again, that the legacy media has lost its ability to set the agenda. Republicans, in fact, are beyond being merely fed up with the Ukraine hype. Many have turned against continuing to fund what some of their representatives have promoted as a “proxy war.”

A Morning Consult poll conducted just before the midterms showed that most Republicans wanted less US involvement in foreign military conflicts, fewer troop deployments overseas and reduced involvement in the affairs of other countries.

Around the same time, a Wall Street Journal poll revealed that nearly half of Republican voters oppose US aid to Ukraine, up from only 6% when the same question was asked shortly after Russia’s military offensive began in February.

That message clearly didn’t get through to McConnell’s Senate Republicans, and the party failed to win control of the chamber as its candidates fared worse than expected in the midterms. In the House of Representatives, Republicans swung from a seven-seat minority to a nine-seat majority, regaining control for the first time since Democrat Nancy Pelosi (California) took the speaker’s gavel in January 2019.

The GOP’s gains came after McConnell’s counterpart in the House, Minority Leader Kevin McCarthy of California, suggested three weeks before the midterms that Republicans might halt or slow the aid gravy train to Kiev when they regained control.

“I think people are gonna be sitting in a recession, and they’re not going to write a blank check to Ukraine.”

Representative Marjorie Taylor Greene, a Georgia Republican, went so far as to say that “not another penny will go to Ukraine” after the GOP wins back the House.

However, the tune began to change when the politicians no longer needed to beg for votes. After the midterms, senior Republican congressmen Michael McCaul (Texas) and Mike Turner (Ohio) assured an ABC News interviewer that “majorities on both sides of the aisle” will still support infinite military aid to Ukraine.

McCaul even suggested that it would be perfectly fine for Ukrainian forces to attack targets in Crimea, since the US and its allies didn’t recognize the region as Russian territory.

When the $1.7 trillion spending bill, including $45 billion in additional aid for Ukraine, came up for a vote in the House on December 23, nine Republicans joined Democrats in voting for its passage. In the Senate, 18 of 50 Republicans voted in favor, giving Democrats the help they needed to pass the bill.

Republicans haven’t even been able to impose basic oversight measures on Ukraine aid, much less shrink or suspend the effort. A bill to audit the $100 billion program was defeated in the House on December 8. When GOP Senator Rand Paul (Kentucky) demanded that an oversight provision be added to a $40 billion Ukraine aid bill in May, Democrats and Republicans alike steamrolled him and pushed through their legislation.

Auditing measures might stand a better chance of passing the House with Republicans taking control of the chamber in January, but the Senate would likely block any such bill from becoming law. The Dems will get plenty of help, too, from McConnell and other neoconservative Republicans in the Senate.

Republicans and Democrats can put on a good show when it comes to transgender restroom policies and other farcical issues. But when it comes to the most non-negotiable issue in Washington, war, political polarization evaporates. The establishment uniparty can always agree to send more rocket launchers, drop more bombs and overthrow more governments.

That’s what former presidential candidate Tulsi Gabbard discovered when she spoke out against US regime-change wars. Then a Hawaii Democrat branded by CNN as the “next superstar” in her party, the Iraq War veteran suddenly became persona non grata when she criticized America’s military interventions around the globe. Party leaders and media propagandists condemned her as a Russian agent. She quit the party in October.

McConnell’s mocking of Republican voters – announcing that party leaders will prioritize the exact opposite of what constituents want and gaslighting them about what they’ve asked for – marks the latest window into Washington’s broken political system.

America’s supposedly representative form of government has devolved into a ruling class that governs with no regard for the best interests of the people while playing divide-and-conquer games to keep the tribes distracted and warring with each other.

Donald Trump threatened to shatter the status quo when he was elected president in 2016. Remember his pledge to “drain the swamp?” Well, the swamp won. Trump lacked the political courage to push through the “America First” agenda that he sold to voters, partly because of the Russia collusion hoax.

Although he campaigned on a pledge to “get along with Russia,” collaborating on such common interests as fighting ISIS – and voters supported him, expressing their democratic will – Trump instead played tough with Moscow.

With political opponents and media outlets accusing him of being a Russian agent, Trump foolishly backed away from what he promised to voters. He bragged in 2018 that “there’s never been a president as tough on Russia as I have been,” as if that was a measure of success.

Russia policy was among several areas where Trump and his party declined or failed to represent voter desires and interests. Even while controlling the executive branch and both houses of Congress, the Republicans didn’t deliver on promises to build a border wall and repeal Obamacare.

And less than a week after winning the 2016 election, Trump quashed any suggestion that he would actually seek to bring Hillary Clinton to justice, as his supporters wanted. The “lock her up” chants and his debate quip to the Democrat nominee that she’d be in jail if he were president were all just theatrics.

When Trump ordered an end to the US military intervention in Syria, the Pentagon essentially thumbed its nose at the commander-in-chief. To this day, hundreds of US troops remain in Syria, without legal justification and in violation of that nation’s sovereignty.

Trump’s signature legislative achievement was a $1.5 trillion tax cut. The federal budget deficit continued to rise, and the nation’s southern border remained porous. Deportations of illegal aliens were lower during Trump’s term, on average, than during Barack Obama’s eight years as president.

It wasn’t the first time. For decades, Republicans have campaigned on promises to secure the border, but even when the GOP controlled the Congress and the White House, the illegal immigration crisis only got worse. Just as the ruling establishment demands that the war machine be kept humming, it insists on a steady inflow of cheap, illegal labor, suppressing the wages of US citizens.

These policies clearly aren’t in the interests of rank-and-file Americans. Nor does it help US taxpayers – or the Ukrainian people – to prolong the fighting in Eastern Europe by sanctioning Moscow and continuing to funnel billions of dollars’ worth of weapons to Kiev. Nor was it in our interests to help overthrow Ukraine’s elected government in 2014 and undermine Russia’s national security by pushing for Kiev to join NATO.

Voters can plainly see that the results of these tactics are ruinous. Consumers in the West, especially Western Europe, face a dark, cold and hungry winter amid energy shortages and the highest inflation rates in 40 years.

Not to worry, though, because McConnell, President Joe Biden and other members of the pro-war uniparty insist that this struggle more than justifies the sacrifices they’re imposing on everyone.

You see, they say, we have a “moral obligation” to defend freedom and democracy in Ukraine. Never mind that Ukrainian President Vladimir Zelensky’s corrupt regime has banned political opposition, shut down all independent media outlets and persecuted the country’s largest church.

In the eyes of Washington’s uniparty, freedom of speech, freedom of the press, freedom of religion and freedom to politically oppose the ruling party aren’t necessary components of a free and democratic country.

So we enter a new year with a new Congress and the same old sacred cows in Washington. The bigger problem this time is that escalating US involvement in Ukraine is pushing us all closer to a planet-ending war with Russia, holder of the world’s largest nuclear weapons arsenal.

The stakes are higher than when Washington launches an illegal invasion in the Middle East or imports a few million additional illegal aliens.

With such politicians as Senator Lindsey Graham, a South Carolina Republican, calling for regime change in Moscow, the uniparty’s latest gambit in defiance of voter interests could cost us all a lot more than higher inflation and lower wages.

Tony Cox, a US journalist who has written or edited for Bloomberg and several major daily newspapers.