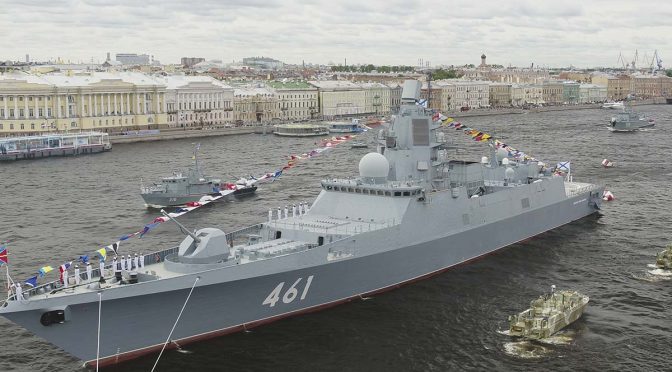 The business tour will encompass the Atlantic and the Indian Ocean, and of course include the Mediterranean, the Roman Empire’s former Mare Nostrum. Mr. Zircon on the prowl has absolutely nothing to do with the war in Ukraine: it’s a sign of what happens next when it comes to frying much bigger fishes than a bunch of Kiev psychos.

The end of 2022 did seal the frying of the Big Ukraine Negotiation Fish. It has now been served on a hot plate – and fully digested. Moscow has made it painfully clear there’s no reason whatsoever to trust the “non-agreement capable” declining superpower.

So even taxi drivers in Dacca are now betting on when the much- vaunted “winter offensive” starts, and how far will it go. General Armageddon’s path ahead is clear: all-out demilitarization and de-electrification on steroids, complete with grinding up masses of Ukrainians at the lowest possible cost to the Russian Armed Forces in Donbass until Kiev psychos beg for mercy. Or not.

Another big fried fish on a hot plate at the end of 2022 was the 2014 Minsk Agreement. The cook was no other than former chancellor Merkel (“an attempt to buy time for Ukraine”). Implied is the not exactly smokin’ gun: the strategy of the Straussian/neo-con and neoliberal-con combo in charge of U.S. foreign policy, from the beginning, was to unleash a Forever War, by proxy, against Russia.

Merkel may have been up to something telling the Russians, in their face, that she lied like crypto-Soprano Mike Pompeo, then she lied again and again, for years. That’s not embarrassing for Moscow, but for Berlin: yet another graphic demonstration of total vassalage to the Empire.

The response by the contemporary embodiment of Mercury, Russian Foreign Ministry’s Maria Zakharova, was equally intriguing: Merkel’s confession could be used as a specific reason – and evidence – for a tribunal judging Western politicians responsible for provoking the Russia-Ukraine proxy war.

No one will obviously confirm it on the record. But all this could be part of an evolving, secret Russia-Germany deal in the making, leading to Germany restoring at least some of its sovereignty.

Meanwhile, deputy chairman of the Russian Security Council Dmitry Medvedev, visibly relishing his totally unplugged incarnation, expanded on the Fried Negotiation Fish saga. “Last warning to all nations”, as he framed it: “there can be no business with the Anglo-Saxon world [because] it is a thief, a swindler, a card-sharp that could do anything… From now on we will do without them until a new generation of sensible politicians comes to power… There is nobody in the West we could deal with about anything for any reason.”

Medvedev, significantly, recited more or less the same script, in person, to Xi Jinping in Beijing, days before the zoom to end all zooms – between Xi and Putin – that worked as a sort of informal closure of 2022, with the Russia-China strategic partnership perfectly in synch.

On the war front, General Armageddon’s new – offensive – groove is bound to lead in the next few months to an undisputable fact on the ground: a partition between a dysfunctional black hole or rump Ukraine on the west, and Novorossiya in the east.

Even the IMF is now reluctant to throw extra funds into the black hole. Kiev’s 2023 budget has an – unrealistic – $36 billion deficit. Half of the budget is military-related. The real deficit in 2022 was running at about $5 billion a month – and will inevitably balloon.

Tymofiy Mylovanov, a professor at the Kiev School of Economics, came up with a howler: the IMF is worried about Ukraine’s “debt sustainability”. He added, “if even the IMF is worried, imagine what private investors are thinking”. There will be no “investment” in rump Ukraine. Multinational vultures will grab land for nothing and whatever puny productive assets may remain.

Arguably the biggest fish to be fried in 2023 is the myth of NATO. Every serious military analyst, few Americans included, knows that the Russian Army and military industrial complex represents a superior system than what existed at the end of the U.S.SR, and far superior to that of the U.S. and the rest of NATO today.

The Mackinder-style final blow to a possible alliance between Germany (EU), Russia and China – which is what is really behind the U.S. proxy war in Ukraine – is not proceeding according to the Straussian wet dream.

Saddam Hussein, former imperial vassal, was regime-changed because he wanted to bypass the petrodollar. Now we have the inevitable rise of the petroyuan – “in three to five years”, as Xi Jinping announced in Riyadh: you just can’t prevent it with Shock’n Awe on Beijing.

In 2008, Russia embarked on a massive rebuilding of missile forces and a 14-year plan to modernize land-based armed forces. Mr. Zircon presenting his hypersonic business card across the Mare Nostrum is just a small part of the Big Picture.

The myth of U.S. power

The CIA abandoned Afghanistan in a humiliating retreat – even ditching the heroin ratline – just to relocate to Ukraine and continue playing the same old broken records. The CIA is behind the ongoing sabotage of Russian infrastructure – in tandem with MI6 and others. Sooner or later there will be blowback.

Few people – including CIA operatives – may know that New York City, for instance, may be destroyed with a single move: blowing up the George Washington bridge. The city can’t be supplied with food and most of its requirements without the bridge. The New York City electrical grid can be destroyed by knocking out the central controls; putting it back together could take a year.

Even trespassed by infinite layers of fog of war, the current situation in Ukraine is still a skirmish. The real war has not even started yet. It might – soon.

Apart from Ukraine and Poland there is no NATO force worth mentioning. Germany has a risible two-day supply of ammunition. Turkey will not send a single soldier to fight Russians in Ukraine.

Out of 80,000 U.S. troops stationed in Europe, only 10% are weaponized. Recently 20,000 were added, not a big deal. If the Americans activated their troops in Europe – something rather ridiculous in itself – they would not have any place to land supplies or reinforcements. All airports and seaports would be destroyed by Russian hypersonic missiles in a matter of minutes – in continental Europe as well as the UK.

In addition, all fuel centers such as Rotterdam for oil and natural gas would be destroyed, as well as all military installations, including top American bases in Europe: Grafenwoehr, Hohenfels, Ramstein, Baumholder, Vilseck, Spangdahlem, and Wiesbaden in Germany (for the Army and Air Force); Aviano Air Base in Italy; Lajes Air Base in Portugal’s Azores islands; Naval Station Rota in Spain; Incirlik Air Base in Turkey; and Royal Air Force stations Lakenheath and Mildenhall in the UK.

All fighter jets and bombers would be destroyed – after they land or while landed: there would be no place to land except on the autobahn, where they would be sitting ducks.

U.S. military power is the supreme myth of the fish to be fried variety. Essentially, they hide behind proxies – as the Ukraine Armed Forces. U.S. forces are worthless except in turkey shoots as in Iraq in 1991 and 2003, against a disabled opponent in the middle of the desert with no air cover. And never forget how NATO was completely humiliated by the Taliban.

2022 ended an era: the final breaking point of the “rules-based international order” established after the fall of the U.S.S.R.

The Empire entered Desperation Row, throwing everything and the kitchen sink – proxy war on Ukraine, AUKUS, Taiwan hysteria – to dismantle the set-up they created way back in 1991.

Globalization’s rollback is being implemented by the Empire itself. That ranges from stealing the EU energy market from Russia so the hapless vassals buy ultra-expensive U.S. energy to smashing the entire semiconductor supply chain, forcibly rebuilding it around itself to “isolate” China.

The NATO vs. Russia war in Ukraine is just a cog in the wheel of the New Great Game. For the Global South, what really matters is how Eurasia – and beyond – are coordinating their integration process, from BRI to the BRICS+ expansion, from the SCO to the INSTC, from Opec+ to the Greater Eurasia Partnership.

We’re back to what the world looked like in 1914, or before 1939, only in a limited sense. There’s a plethora of nations struggling to expand their influence, but all of them are betting on multipolarity, or “peaceful modernization”, as Xi Jinping coined it, and not Forever Wars: China, Russia, India, Iran, Indonesia and others.

Pepe Escobar, is an independent geopolitical analyst, writer and journalist.