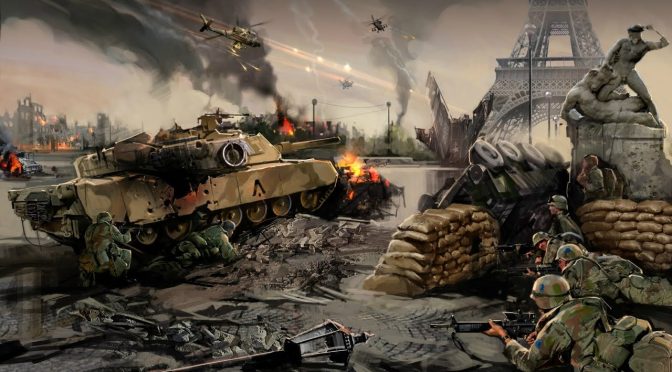 Even though one has become accustomed to seeing the United States government behaving irrationally on an epic scale with no concern for what happens to the average citizen who is not a member of one of the freak show constituencies of the Democratic Party, it is still possible to be surprised or even shocked.

Shortly before year’s end 2022 an article appeared in the mainstream media and was quite widely circulated. The headline that it was featured under in the original Business Insider version read “A nuclear attack would most likely target one of these 6 US cities — but an expert says none of them are prepared.” The cities were New York, Washington DC, Los Angeles, Chicago, Houston and San Francisco.

The article seeks to provide information and tips that would allow one to survive a nuclear attack, repeating commentary from several “experts” in emergency management and “public health” suggesting that a nuclear war would be catastrophic but not necessarily the end of the world. One should be prepared. It observes that “those cities would struggle to provide emergency services to the wounded.

The cities also no longer have designated fallout shelters to protect people from radiation.” It is full of sage advice and off-the-cuff observations, including “Can you imagine a public official keeping buildings intact for fallout shelters when the real-estate market is so tight?”

Or even better the advice from the Federal Emergency Management Agency (FEMA)’s “nuclear detonation planning guide” that for everyday citizens in a city that has been nuked: “Get inside, stay inside, and stay tuned.” Dr. Ron Paul asks “Are they insane? They act as if a nuclear attack on the United States is just another inconvenience to plan for, like an ice storm or a hurricane.”

The article argues that the six cities would be prime targets as they are centers for vital infrastructure. The bomb blasts would kill hundreds of thousands or even millions of Americans with many more deaths to follow from radiation poisoning, but the article makes no attempt to explain why Russia, with a relatively sane leadership, would want to start a nuclear war that would potentially destroy the planet. Also, the targeting list of the cities provided by the “experts” is itself a bit odd.

Surely Russia would attack military and government targets as a first priority to limit the possible retaliation while also crippling the ability of the White House and Pentagon to command and control the situation. Such targets would include both San Diego and Norfolk where the US Atlantic and Pacific fleets are based as well as the various Strategic Air Command bases and the underground federal government evacuation site in Mount Weather Virginia.

Reading the article, one is reminded of the early years of the Cold War that sought to reassure the public that nuclear war was somehow manageable. It was a time when we elementary school children were drilled in hiding under our desks when the air raid alarm went off. Herman Kahn was, at that time, the most famous advocate of the school of thought that the United States could survive the “unthinkable,” i.e. a nuclear war.

An American physicist by training, Kahn became a founding member of the beyond neocon nationalist Hudson Institute, which is still unfortunately around. Kahn, who served in the US Army during the Second World War as a non-combat telephone lineman, started has career as a military strategist at the RAND Corporation.

Kahn endorsed a policy of deterrence and argued that if the Soviet Union believed that the United States had a devastating second-strike capability then Moscow would not initiate hostilities, which he explained in his paper titled “The Nature and Feasibility of War and Deterrence”.

The Russians had to believe that even a perfectly coordinated massive attack would guarantee a measure of retaliation that would leave them devastated as well. Kahn also posited his idea of a “winnable” nuclear exchange in his 1960 book On Thermonuclear War for which he is often cited as one of the inspirations for the title character of Stanley Kubrick’s classic film Dr. Strangelove.

The appearance of the Business Insider article dealing with a cool discussion of the survivability from a nuclear war suggests that the nutcases are again escaping from the psychiatric hospital here in the US and are obtaining top jobs in government and the media.

While one continues to hope that somehow someone will wake up in the White House and realize that the deep dark hole that we the American people find ourselves in mandates a change of course and a genuine reset, there is little daylight visible in the darkness.

My particular concern relates to the entangling relationships that have kept our country permanently at war in spite of the fact that since the Cold War ended in 1991 no potential adversary has actually threatened the United States.

Now, the federal government appears to be in the business of cultivating dangerous relationships to justify defense spending and placing the nation on the brink of what might prove to be catastrophic.

The current US mission to “weaken Russia” and eventually also China in order to maintain its own “rules based international order” includes such hypocritical and utterly illegal under international law anomalies as the continued military occupation of part of Syria to deny that country’s leaders’ access to their oil fields and best agricultural land.

A recent UN humanitarian agency investigation determined that the Syrian people are suffering and even starving as a result of that and US imposed sanctions that the Biden Administration maintains against all reason and humanity.

At the present time, however, the most entangling of all relationships, even more than with Israel, has to be the engagement of the US in the proxy war being fought against Russia on behalf of Ukraine, which is exactly what threatens to turn nuclear if someone blinks at the wrong time.

Billions of dollars in direct aid as well as billions more in the form of weapons stripped from arsenals in Europe and the US have been given to the corrupt regime of President Volodymyr Zelensky while Zelensky continues to work assiduously to milk the situation and draw Washington into a deeper war directly confronting Moscow.

In fact, by some reckonings the war has already begun, with the US and its allies clearly dedicated to crippling the Russian economy while also getting rid of President Vladimir Putin. The 101st Airborne is now in place in Romania next to Ukraine to “warn” the Kremlin while the Pentagon has recently admitted that some American military personnel are already in Ukraine, contrary to the denials by White House spokesmen.

The British have also revealed that some of their elite Special Ops personnel are on the ground. And there are reports that more American soldiers will soon be on the way, ostensibly to “track the weapons” being provided to Zelensky, which will include US-made, Patriot Missile batteries some of which might even be placed in NATO member Poland to provide air cover over Western Ukraine, a definite act of war as seen by Russia, which has warned that such a move would mean that the US and its allies had “effectively become a party” to the war in Ukraine and there will be “consequences.” “Consequences” means escalation.

The soldier-“trackers” mission may be in response to reports that weapons provided by NATO have been corruptly sold or given to third countries by the Ukrainians. The several US initiatives taken together could produce a rapid escalation of the conflict complete with dead Americans coming home in body bags and an inevitable direct US involvement in combat roles that could lead anywhere, but at this point it is the Russians who are acting with restraint by not targeting the NATO and US “advisers” who are already active in Ukraine.

Suspicion is also growing that the United States “green-lighted” in advance recent cruise missile attacks carried out by Ukraine against military targets deep inside Russia. Since the attacks, the White House has declared that Ukraine has “permission” to attack Russia and has basically conceded to the unbalanced Zelensky the right to make all the decisions and run the war that the US is largely funding, which is a formula for disaster.

It is already known that Ukraine is receiving top level intelligence provided both by the US and also other NATO states. The precision attacks on Russia suggest that the Ukrainian army was given the coordinates of possible active targets, something that the US would be capable of providing but which would have been beyond the abilities of Ukraine, which possesses no satellite surveillance capability.

If it is true that the White House was involved in escalating the conflict it would be a very dangerous move, inviting retaliation by Moscow.

To be sure, some idiots in Washington, mostly of the neocon variety, continue to see war against Russia as something like a crusade for world freedom. Rick Newman, Yahoo’s top Finance Columnist, observes how “Budget hawks in Congress are worried about granting President Biden’s request for an additional $38 billion in aid for Ukraine to help defeat the invading Russians.”

He concludes “They’re right. Thirty-eight billion isn’t enough. Make it $50 billion. Or even $100 billion. The more, the better, until the job is done.”

Apparently, the bellicose Rick does not quite get that Russia has made clear that if it is about to be defeated by force majeure it will go nuclear. And Congress and the White House don’t seem to get it either, with both the Republican and Democratic parties oblivious to the real danger that confronts the American people.

Nuclear war? Sure! Just hide in your basement, if you have one, and tune in.

Philip M. Giraldi, Ph.D., is Executive Director of the Council for the National Interest, a 501(c)3 tax deductible educational foundation (Federal ID Number #52-1739023) that seeks a more interests-based U.S. foreign policy in the Middle East. Website is councilforthenationalinterest.org, address is P.O. Box 2157, Purcellville VA 20134 and its email is in****@cn*******.org.