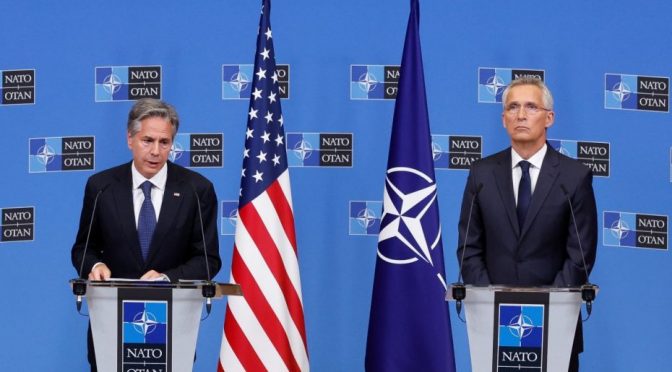 Not even the military conflict between Russia and Ukraine would have happened if there hadn’t been for the relentless NATO expansion towards the East. And now NATO is even trying to do their ‘(un)fair’ share in the Asian Pacific region.

After Barack Obama winning the Nobel prize for peace in 2009 in the form of political ‘advance payment ‘ the very moment he became U.S. President, and after the Ukranian activists got ‘legitimized’ as the activists for the alleged human rights they were /are advocating, which funnily enough, happen to be financed by CIA, through the National Heritage for Democracy, why on Earth not NATO General Secretary to be a candidate this year?

Anyway, the connection between the CIA and human rights seems to be the equivalent of NATO and world peace in their political glossaries. It then seems only too logical that there came the news from the Parliament of Norway on 6th January 2023 that the proud candidate for the Nobel peace prize for 2023 is Jens Stoltenberg for his ‘extraordinary’ commitment and ‘superb’ contribution to NATO in these trying times, particularly because in his capacity of NATO General Secretary, he has been putting forth vehement and adamant opposition to Russia.

Stoltenberg even admitted that NATO have been arming Ukraine since the military coup in 2014, which is by the way, “a century-old method of making peace and not war” and hence, it is blatantly obvious that this is why Nikolai Patrushev, the secretary of the Security Council of the Russian Federation remarked the other day that the ongoing events in Ukraine are not military conflicts of Russia and Kiev but this military conflict is between NATO (USA and UK predominantly) and Russia. Furthermore, this assessment was confirmed by Hungarian prime minister Victor Orban: “A huge chunk of Europe is already involved in this war ” – he pointed out with much needed political wisdom.

“Those who send off weapons to Ukraine are at war at least up to their ankles deep. Those who train Ukrainian soldiers are at war up to their knees and those who for the whole year finance one side to the war by financing military and government spending, in the manner EU does, with the 18 billion euros, it means they are at war up to their waist deep. I sincerely hope that the EU will not get entangled in it up to their necks. Hungary is keeping out of it all. We firmly believe that there should be a truce at this very moment and we need peace negotiations and eventually peace.”

This genuinely heartfelt message of peace by Victor Orban , for which he regrettably hasn’t been awarded candidacy for the Nobel peace prize, was commented on by Carl Bildt, the former Prime Minister of Sweden and the infamous NATO activist at that, with utmost scorn and derision: “Is Hungary really an EU member state?”

Meanwhile, all the remaining dilemmas as for the nature and the role of NATO participation in this conflict in Ukraine if there still were any left, were sorted by Ukrainian Minister of Defence Olexeii Reznikov saying: “Russia is the chief threat for NATO. Ukraine is at present eliminating this threat and in so doing it is performing actions in line with the NATO mission”.

For matters to get even more absurdly cynical, at the very moment while he was being recommended for the Nobel Peace Prize candidacy, Stoltenberg called upon his friends and enemies to brace themselves for yet another war. “The weaponry is the pathway to peace – he said in all seriousness. “The regime in Moscow wants a different Europe which places Russia in the position of an incessant conflict with the Collective West but Russia is not the only issue” – this warmongering peacekeeper added desperately trying to command authority, but failing miserably in his political temper tantrums unbefitting of an adult in his position.”

A few weeks before the Russian “invasion of Ukraine”, the President Vladimir Putin and Xi Jinping met in Beijing announcing their strategic partnership without borders! Russia and China increasingly and operationally connect their military troops and take them for joint military exercise!

They (i.e. Russia and China) have increased their economic cooperation and China hasn’t yet condemned the Russian ‘invasion’ of Ukraine! – warns temper tantrum Stoltenberg. He goes on to add: “China is pushing the Russian narrative, blaming NATO for everything! Besides, China has for the first time upheld the Russian request that NATO should close its doors for new member states!

These regimes (Chinese and Russians, that is) are different but what they have in common is that they promote an “alternative world order!”

Bearing all this in mind, China Daily, the owner of which is the public relations department within the Chinese Communist Party, due to which it certainly carries more weight, their editorial commentary on the issue of Stoltenberg’s candidacy for the Nobel Peace Prize, they say that that seems not to be a joke at all. They add that it is rather odd for the warmongering leader of the greatest war alliance, which is NATO, to be hailed as the peacekeeper.

The Nobel Peace Prize once an award of high scholarly repute, is now the sheer political instrument of the Collective West. The nomination of the NATO General Secretary will further damage its reputation. Put Stoltenberg aside, the China Daily puts forth more long term predictions that NATO was the product of the Cold War, which was supposed to be dismantled after the downfall of the USSR but instead it has developed ever more insatiable thirst for expansion.

Look at how many conflicts NATO has been heavily involved in since the Second World War. In that context, China Daily mentions the Kosovo War in 1999, during which the USA even bombed the Chinese Embassy in Belgrade, Serbia.

Not even the military conflict between Russia and Ukraine would have happened if there hadn’t been for the relentless NATO expansion towards the East. And now NATO is even trying to do their ‘(un)fair’ share in the Asian Pacific region. NATO is one of the main sources of global instability and surely not ‘the bastion of world peace’ – China Daily concludes.

We are yet to see how China will respond to all this and whether Stoltenberg will get his (undeserving) Nobel Peace Prize after all. Mercifully, we might soon see further “Orbanization” of Europe (note to SCF readers: for me the “Orbanization” is a positive thing, unlike what some loonie leftists tend to think in their misinterpreting the neologism), because from the looks of things,

(Disclaimer: my sincere apologies to all the millions of casualties in the First and the Second World War and their descendants for my sarcastic use of the parallel with Adolf Hitler in the title of this article).

Natasha Wright – а linguist and a translator by profession and an aspiring political analyst as of recent. As is often the case, life takes us along its meandering pathways (her name and surname is a pen name thanks to her personal life history). Hopefully she will go the same route Noam Chomsky did, from the most profound linguistics into the most thought provoking political though.