Peace in the Korean Peninsula means the Khazarian mafia is now pulling out all stops in an effort to start World War 3 in the Middle East, multiple sources agree. The result is that there is now a huge battle going on there that is likely to determine the fate of Israel and its ally Saudi Arabia, a collective we will refer to as Saudi Israelia. The battle will also determine who rules the West—satanic bloodlines, or the people.
This is why Israel last week attacked Syria with nuclear weapons and thus left itself open to Russian retaliation, Pentagon sources say. Video of this nuclear attack is being systematically scrubbed from the Internet, but at the time of publication of this newsletter it could be seen here:

There are signs that the nuclear attack may have been Saudi Isrealian retaliation for the assassination of Crown Prince Mohammed bin Salman, the de facto ruler of Saudi Arabia. Crown Prince Salman has not appeared in public since heavy gunfire was reported inside the royal palace last week. The only person trotted out for the press when U.S. Secretary of State Mike Pompeo visited over the weekend was the fake king.

However, the fog of war is especially thick in the region now, so we will not know a lot of what is going on until the dust settles a bit more.
In any case, it is clear Saudi Israelia is increasingly isolated in the region, as Turkey, Iran, Egypt, Qatar, Iraq, Syria, and other regional powers line up against them. Now, the U.S. decision to withdraw its troops from Syria into Iraq is a sign to the Russians and their allies that the U.S. military will not defend Saudi Israelia from any Russian attack as long as U.S. control of oil resources in the region is not threatened, Pentagon sources say.
This struggle is not limited to the Middle East, but is also raging under and above the surface in Europe, the U.S., and Russia as the old satanic bloodline families struggle to retain control of the planet Earth.
A visible sign of this epic battle was seen when French Rothschild slave President Emmanuel Macron visited U.S. President Donald Trump last week. This was captured in the photograph below, sent by Pentagon sources. 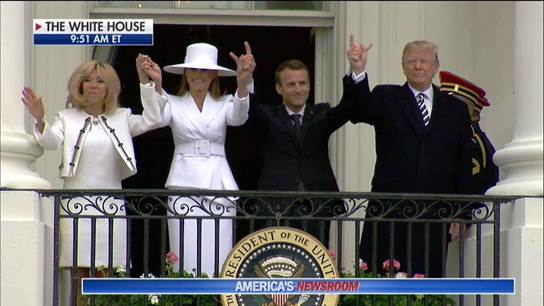 The Pentagon caption is as follows: “While Macron displays the satanic hand signs, Melania Trump on April 24 sends a message to the Rothschilds that white hats are in control.”
At his meetings with Trump, Macron pretended to support the Iranian nuclear accord that supposedly keeps Iran from having nuclear weapons, while in fact the Rothschilds have been providing Iran with both money and nuclear weapons as part of their fanatical efforts to start World War 3, according to members of the Iranian royal family.  The Iranians still have neutron-bomb-tipped missiles that were sent to them by the Bush regime, because the Obama regime refused to accept their return, the sources say.
So the real battle is not about “preventing Iran from getting nuclear weapons,” as is being constantly drummed into us by the Khazarian-controlled corporate media.  The real battle is between people who want real peace in the Middle East and the religious fanatics trying to start Armageddon.
The nuclear attack on Syria is almost certain to be followed by retaliatory attack on either Israel or Saudi Arabia, as the fanatics, fearing for their very lives, try to save themselves by starting a world war.  The White Dragon Society and their allies will try to prevent this from escalating into a nuclear inferno by continuing to systematically remove rulers in Israel, Iran, Saudi Arabia, Europe, Russia, the U.S., and elsewhere who are plotting to make this happen.
The battle in the U.S. against the satanists is almost over, even though the 25,500 sealed indictments have yet to be acted on.  Last week House Speaker Paul Ryan was the latest in a comprehensive list of powerful people who have been purged.  Remember, George Soros, David Rockefeller, Zbigniew Brzezinski, Hillary Clinton, Barack Obama, Barbara Bush, John McCain, etc. are now out of the picture.
The satanists have been trying to create the illusion that this purge is not happening by digitally reviving key people like Clinton, George Soros, and Bill Gates.  Last week, for example, they recycled a veiled threat by Gates to kill millions of people with bioweapons.

This sort of digital trickery does not change the reality that these people are gone.
However, satanic leaders like Theresa May in the UK, Macron in France, Benjamin Netanyahu in Israel, and Angela Merkel in Germany are still in place.
Removing Macron may be the next move.  Here, “The National Transition Council’s Supreme Court, which is the only legitimate justice authority in France, has issued an arrest warrant for Macron and his illegitimate government,” and they hope to enforce it on or around May 5th, according to the Council.
The Council notes that apart from making the satanic hand sign in Washington last week, Macron has placed a satanic symbol in the presidential office and made his acceptance speech with his head posed just below an eye on the top of a pyramid.

It is interesting to note that the oak tree planted in Washington last week by Macron and Trump has gone missing, Council sources say.
https://twitter.com/Breaking911/status/990714893677494272
In the UK, embattled Prime Minister May lost a major ally last week when Home Secretary Amber Rudd was forced to resign, ostensibly over the mistreatment of immigrants.  The Home Secretary in the UK is in charge of the MI5 spy service, and she was really removed because of her involvement in fake gas attack stories in the UK and Syria aimed at provoking war, MI6 sources say.  May will soon be removed and replaced with 9/11 and 3/11 truther Jeremy Corbyn, the MI6 sources say.
There is also a lot of high-level intrigue going on in Russia, which is being blamed hysterically by the Khazarians for stealing elections, gassing people, etc.  The following intelligence was sent to us by a White Dragon Society (WDS) source inside the Russian intelligence apparatus:

“The FSB and the government Internet-controlling agency have started to block many websites and domains under the story of ‘fighting against terrorists,’ but actually they have been doing some experiments on closing the Internet from outside resources.  I looked at the commercial side of this story and saw that the entire Russian side of the Internet-prominent portals, resources, media, etc. are owned exclusively by Jewish people.  Moreover, they also have shares in Facebook (10%) and keep buying more shares of it.  They are part of a criminal group that is buying shares using different people or organizations that look like they not connected, but they are.  This group is linked to the Rockefellers and some government agencies.”

Remember, Facebook is controlled by Mark Zuckerberg, grandson of David Rockefeller.
The source also says this move to control the Russian Internet is also somehow connected to a push inside Russia to make owning cryptocurrency a crime punishable by four years in jail.
It is a good guess that the ongoing move to take control of Russia’s Internet is aimed at trying to manipulate Russian public opinion into supporting an end-times war.  It may also be a strategy aimed at undermining the Christian revival in Russia.
In any case, for now, the focus on ending constant war will be to finish the peace process in Korea, Pentagon sources say.  To this end, Admiral Harry Harris will be sent to Seoul as ambassador to be military governor of a unified Peninsula, the sources say.
Once the Korean issue is put to rest, the peacemaking focus will shift to Saudi Isrealia, according to WDS sources in Asia.