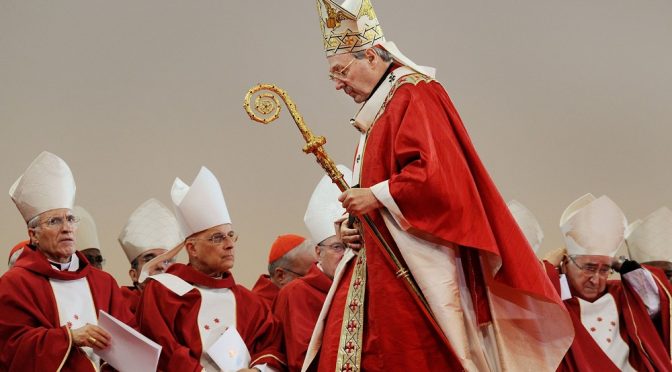 A comprehensive take-down of the Khazarian mafia continues around the world. The biggest developments were at the top ranks of the Vatican where the Vatican Finance Minister and Number 3 honcho, Australian Cardinal George Pell was suspended after being indicted for child rapes.
by benjamin
July 4, 2017
As a result “the pedos are in full panic mode,” Pentagon officials say. Francis also removed another top honcho, Cardinal Gerhard Mueller, from his post has head of Doctrine and replaced him with a moderate.
The suspension of Pell as Finance Minister is almost certainly related to the goings on at Bougaineville and Papua New Guinea, areas under Australian control, and therefore Pell’s bailiwick, White Dragon Society sources say. The revelation that only about 3% of the money from minerals being extracted in PNG is going to the locals completely contradicts Pope Francis’s vow the turn the Catholic Church into a “poor church for the poor.”
The WDS plan to connect the gold in Bougaineville to crypto-currencies, with US and Russian military backing, and thus completely by-pass the existing Vatican and Khazarian mafia controlled financial system must have added urgency to the Vatican’s moves to remove Cardinal Pell.
The removal of the German Mueller, who was seen by many as the head of the resistance to Pope Francis’s moves to make the church more easy-going, is also a significant defeat for the Khazarian mafia and their proxies, P2 Freemason sources say. This removal is probably going to affect what happens with the Knights of Malta, where a German/British split has been peppered over, leading to a stalemate at the top of the most important military spiritual order in the West. This in turn will affect how the US military industrial complex is run.
In other words, the fanatical faction that still wants to start World War 3 has lost its most senior backers, WDS sources say.
Another other big development last week was the arrival of the aircraft USS Bush in Israel. The Mossad site DEBKA expressed confusion about the arrival of the carrier because it apparently was not there to attack either Iran or Syria.

In fact, Pentagon sources say, the arrival of the carrier in Israel is a “blunt message that the US and Russia may impose an air-sea blockade if authorized by the United Nations Security Council to force a peace deal and a return of the Golan [Heights to Syria].”
Already Iranian, Russian and Hezbollah troops are at the Israeli border and now, instead of coming to protect Israel, it seems the US military is working with its enemies to finally put that rogue state in its place.
Saudi Arabia’s ruling Saud family, having come out of the closet as being Khazarian Satanists and not Muslims, are also going to be forced to cease and desist their trouble-making now that they are isolated from the rest of the Muslim world. This is why the Saudi/Israeli/Daesh mercenary proxy army is melting away.
The Chinese are adding to the pressure by insisting that the Saudis stop selling their oil to them in Khazarian controlled so-called US dollars. The Saudis will soon have no choice but to abandon the petrodollar, CIA and Pentagon sources agree.
Yet a third huge development last week came in Japan where the long ruling Liberal Democratic Party experienced a historical defeat in Tokyo Prefectural elections.
Here Governor Yuriko Koike and the Buddhist Lay Organization Sokka Gakkai supported Komeito Party scored a huge upset win, getting 79 seats in the 127 seat assembly while the LDP fell to 23 seats from a previous 57.
This loss means the Khazarian slave government of Prime Minister Shinzo Abe, and the LDP are going to face a similar demolition in national elections that will probably be held soon as a result of this defeat in Tokyo, Japanese right wing sources say. This means Japan’s post-war slave regime, run mostly by Koreans pretending to be Japanese, is finally ending.
A similar current could be detected in the Korean Peninsula with a South Korean offer of a peace treaty to North Korea making it likely the artificial division of that peninsula will also end soon.
http://timesofindia.indiatimes.com/world/rest-of-world/south-korea-to-offer-peace-treaty-to-north/articleshow/59367352.cms
In the US, meanwhile, the New York Times, CNN and other Khazarian controlled propaganda outlets are being forced to issue corrections and fire staff as their outright lying and propaganda is exposed.
CIA sources say the removal of Khazarian filth from the US power structure is nearly complete and that is why changes are now being seen in Asia.
Also the US military is moving to create a space corps while President Donald Trump has signed an executive order to resurrect the National Space Council. This is a possible sign the US military industrial complex is finally getting ready for the disclosure that secret space program advocates have long been calling for.
These big sea-changes are coming before what is expected to be a key G20 summit meeting takes place in Hamburg, Germany July 7th and 8th.
In the run up we see some serious jostling between China and the US where some high tension is arising. Most importantly, Pentagon sources hint they shot down a Chinese satellite last week.
https://www.nasaspaceflight.com/2017/07/long-march-5-lofts-shijian-18/
The other moves showing the honeymoon between Chinese President Xi Jinping and Donald Trump was ending were a US deal to sell arms to Taiwan, US sanctions against a Chinese bank, tariffs on steel and other items and the dispatch of a destroyer to the Paracel Islands in the South China Sea, Pentagon sources note.
The Chinese are not taking all this lying down and have sent warships and fighter planes to confront the US destroyer. Also there can be no doubt that China took symbolic military action against India last week just as Indian Prime Minister Narendra Modi was meeting with Trump. The Chinese have previously told their US counterparts they had the technical capability to overrun India within two months, if necessary.
It looks like Russia is going to have the role of referee between China and the US at the upcoming G20 meeting. Trump is scheduled to meet there, for the first time, with his counterpart Vladimir Putin and Pentagon sources say his mandate will be to end the Russia/US spat being engineered by the Khazarians in the US.
Russian White Dragon Society sources say past US actions have left the Russians profoundly distrustful of the Americans. However, as Russian Foreign Minister Sergei Lavrov and other Russian officials have repeatedly stated, the Russians favour a harmonious world system not dominated by a single power.
To that end, in something that slipped under this writer’s radar, a series of top world religious leaders issued a joint appeal on June 14th for the people of the world to unite and make friends across religious boundaries.
http://iqra.ca/2017/worlds-religious-leaders-unite-to-issue-an-urgent-message-to-humanity/