Now that top-level satanic Khazarian cabalists have fallen, second-rank officials like Supreme Court Justice Ruth Bader Ginsburg, World Bank chief Jim Yong Kim, and Serena Rothschild (widow of Jacob Rothschild) are being removed as the war to liberate humanity continues.
Ginsburg “has gone missing and may be dead or still in NY hospital, missing two weeks of oral arguments at the Supreme Court, or the entire month of January, with no proof of life, setting the stage for U.S. President Donald Trump to name another Justice,” Pentagon sources say.
Jim Yong Kim, a Clinton appointee, was forced to resign as President of the World Bank because of corruption, say Dragon family sources. Investigators are focusing in particular on Haiti and Kim’s involvement with Clinton corruption related to the artificially induced 2010 Haiti earthquake, CIA sources say.
Serena Rothschild was the widow (or wife) of senior Zionist elder Baron Jacob Rothschild and mother of Nathaniel Rothschild. All we know is that she died “after a short illness.” We have reported that Jacob Rothschild is already dead, but it appears that attempts are being made to make it seem he is still alive in order to prevent his progressive-minded son Nathaniel from taking over the British branch of this still-powerful family.
In any case, with U.S. military tribunals well under way, many more prominent power brokers and financiers will be removed in the coming days and weeks, Pentagon sources say. Among those due to fall soon are IMF head Christine Lagarde, and senior KKR financiers Henry Kravis and George Roberts, the sources say. In addition, Prime Minister Shinzo Abe of Japan, President Emmanuel Macron of France, Prime Minister Theresa May of the UK, and mass-murderer Benjamin Netanyahu of Israel will go, Pentagon sources say.KKR and and their employee General David “betray us” Petraeus are being charged in the ongoing U.S. military tribunals for their role in creating and arming Daesh (we don’t want to insult the Goddess by calling them ISIS), the sources say. KKR public relations had not responded to a query on this matter by the time this newsletter went public.
French military sources, for their part, say Emmanuel Macron will be removed soon by a military government that will arrest the cabalists who have stolen French democracy for the past 11 years. After that, they will restore true democracy to the Republic. Vive la France!
The move to arrest Shinzo Abe will take longer, but preliminary work has begun as French police have indicted Tsunekazu Takeda, president of Japan’s Olympic Committee, on bribery charges.

While this can be seen as French retaliation for the arrest and mistreatment of former Nissan president Carlos Ghosn, there’s more to the story. According to Japanese right-wing sources, Takeda is a member of the Japanese imperial family and was involved in Japan’s getting the 2020 Olympics as a reward for going along with the March 11, 2011 Fukushima tsunami and nuclear mass-murder attack. Abe, his cabinet, and the Iwasaki Mitsubishi clan will all be taken down as a result of their complicity with this mass murder, the sources say.
Theresa May is being removed for her role in trying to sabotage Brexit and hand over control of British intelligence to the gangster families that control the EU, according to MI6 sources. The letter below was sent by the former head of British Intelligence to MPs to warn them of May’s treason. 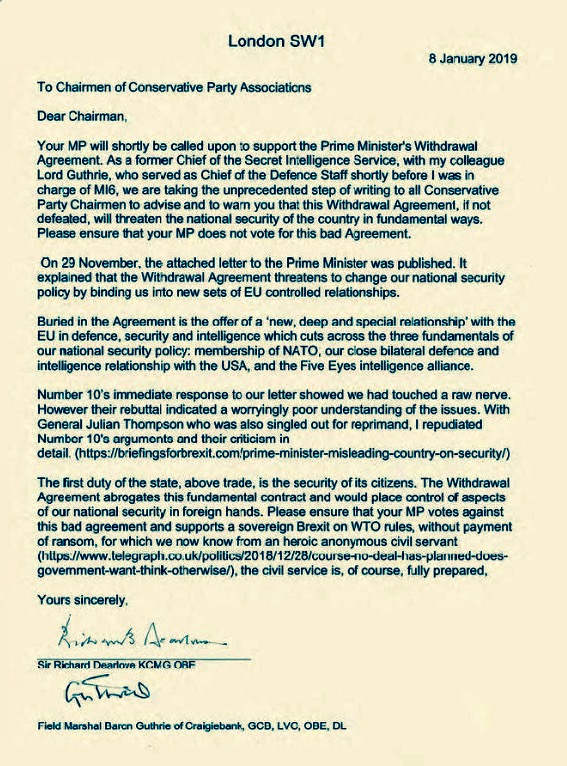 Furthermore, the U.S. government has made it public that it no longer recognizes the EU as being a legitimate government by downgrading its diplomatic status.

IMF head Christine Lagarde is also being targeted by the U.S. because of her ongoing push to position a cryptocurrency-type IMF Special Drawing Right (SDR) as an alternative to the U.S. dollar, CIA sources say. Instead, a Dragon family ambassador says the IMF is going to be liquidated. Lagarde previously had begged the Chinese for a chance to move the IMF to Asia and was turned down, the source noted.

The IMF has a miserable track record of forcing poor countries to impoverish their own people in order to hand resources over to corporations controlled by the Khazarian mafia.
In any case, it appears that as the dragnet closes in, bankers have started falling off buildings again.

British Intelligence say the bankers are being killed both to cover up evidence trails leading to senior people and to collect insurance money.
Speaking of evidence trails, forensic accountant Kenneth Boyd has looked into how people like Trump’s Commerce Secretary Wilbur Ross, Treasury Secretary Steven Mnuchin, Prince Charles, former UK Finance Minister James Sassoon, as well as various mega-corporations use offshore tax havens to avoid taxes that the rest us are forced to pay.

The dragnet is also closing in on the rogue state of Israel and their Satan-worshiping and criminally indicted Prime Minister Benjamin Netanyahu, the Pentagon sources say. On that front, the big kahuna, 9/11, is being taken on. Trump’s speech on January 8th was exactly 9 minutes and 11 seconds long. This is a prelude to Trump declaring a national emergency and releasing all the 9/11 files, the sources say.
Also, an “Israel-drafted anti-BDS bill to provide $38 billion in aid and punish political speech was defeated twice in the Senate (56-44, 53-43, and it needs 60 votes) as moves are afoot to purge Congress of Israeli dual-citizens and traitors,” the Pentagon sources say. (BDS = Boycott, Divestment, and Sanctions.)
Furthermore, the global boycott of Israel is intensifying as “as HSBC Bank divests from Israeli arms merchant Elbit Systems, Airbnb bans West Bank listings, and Brazil may not move its embassy to Jerusalem,” the sources say.
Netanyahu’s neocon slave boy John Bolton “got his wings clipped” by Turkish President Recep Erdoğan and top U.S. General Joseph Dunford when he tried last week to stop the U.S. military withdrawal from Syria, they add.
Meanwhile, former U.S. Attorney General Jeff Sessions, General James Mattis, and General John Kelly are running military tribunals with intelligence support from former NSA Director Admiral Mike Rogers and former Defense Intelligence Agency boss Mike Flynn, who are currently dealing with the above-mentioned KKR and Petraeus, the sources say.
With the U.S. government now shut down for the fourth consecutive week and no end in sight, the whole world can see that the days of the U.S. Corporation are numbered. Dmitry Rogozin, the head of the Russian Roscosmos State Space Corporation, cancelled his planned February visit to NASA (“not a space agency”), because the “second American civil war” is under way. Also, the fact that NASA’s money has been cut off by the shutdown was undoubtedly a factor in the cancelled visit.

The shutdown means that as more and more unpaid prison guards and air traffic controllers call in sick, and as food benefits run out for the 44 million Americans relying on them, chaos is coming to the U.S.
For the few remaining Kool-Aid drinkers out there who still believe the U.S. government shutdown is about funding an already-funded wall, we would like to remind them that the U.S. has a cumulative trade deficit of over $11 trillion, a government deficit of over $22 trillion, and unfunded liabilities of $210 trillion, versus a GDP of $19 trillion. So if you are earning $19,000 a year and have debts of $243,000, would you want to declare bankruptcy or remain an impoverished debt slave for the rest of your life?
The White Dragon Society (WDS) and its allies are offering an alternative to never-ending debt slavery. Our proposal is to immediately eliminate, as a singular event, all public and private sector debt. We would then redistribute the assets stolen from the people by fraudulent privately-owned central banks. We estimate this would mean a one-off payment of the equivalent of $400,000 to each man, woman, and child in the U.S. Furthermore, once freed from debt slavery, the American people would be able to use their farms, resources, people, factories, know-how, and superior technological skills to create an era of unprecedented prosperity.
As far as the rest of the world is concerned, once the West had nationalized its central banks and removed the criminal element from the banking system, it would be possible to carry out a multi-trillion-dollar campaign to end poverty and stop environmental destruction. This could be done without debt or taxes if a proper meritocratic governance structure were put into place.
The Chinese “One Belt One Road” project, 60 times bigger than the Marshall Plan, is an example of the type of project the West also needs to start. When the old-guard elite meet at their Davos lovefest on February 22nd, let’s see if they offer anything that even comes close to the WDS plan to spend trillions of dollars per year to help save the planet. If not, then it’s time to remove their control over the financial system. Humanity needs to be free to create an ideal future for our planet.

One thought on “Supreme Court Justice, World Bank President, and another Rothschild fall as revolution continues”