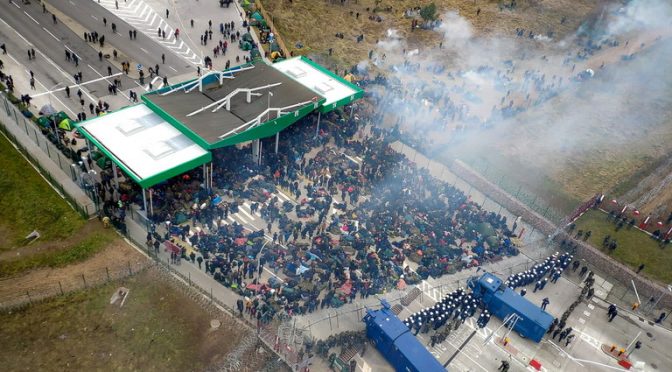 As the sound of flashbangs echoes out over the Polish-Belarusian border amid a worsening migrant crisis, a new buzzword is all over the political vocabulary – hybrid warfare. While the term is old, it has taken on a new dynamic.

END_OF_DOCUMENT_TOKEN_TO_BE_REPLACED 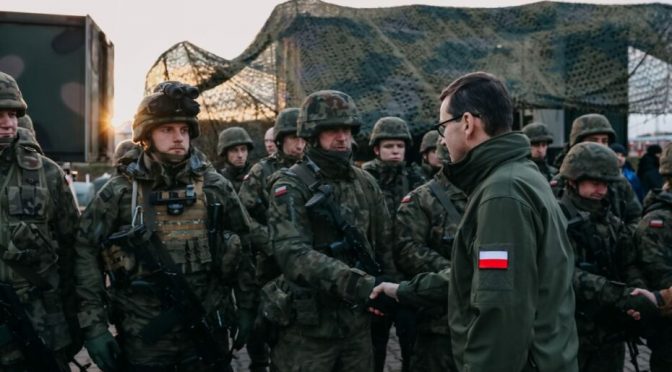 Brussels is shirking its legal obligations in order to avoid internal tensions with populist opposition to capitalist corporate-controlled Europe.

European Commission President Ursula von der Leyen has made a stark accusation against Belarus and Russia, claiming they are weaponizing the migration problem on the border with Poland. This is a cowardly move to divert blame. It is also recklessly escalating confrontation.

Speaking to media after a White House meeting with U.S. President Joe Biden, the top European Union official said the task at hand was about “protecting our democracies” from “cynical hybrid warfare”. She explicitly accused Belarus of weaponizing migration and destabilizing the EU.

Von der Leyen did not mention Russia by name but her comments implied Moscow was colluding with its neighbor and ally to create geopolitical tensions by facilitating an influx of migrants into Poland, Lithuania and Latvia. She also cited unproven previous allegations of election interference and cyberattacks attributed to Russia as precedents for the current “hybrid warfare” with migration.

Other EU leaders have been more openly provocative. Polish Prime Minister Mateusz Morawiecki this week claimed that Russian President Vladimir Putin was “masterminding” a plot in cahoots with Belarus to flood the EU with migrants. This is a rehash of an old claim dating back to 2015 when more than one million refugees entered the EU. That mass movement was claimed then to be “hybrid warfare” orchestrated by Putin to wreak havoc in the bloc.

Such a claim is based on irrational Russophobia that does not stand up with facts, then or now.

Most of the refugees stranded at the Belarus borders with Poland and the Baltic states are from Syria, Iraq and Afghanistan. This was the same as in 2015. The common denominator is that these three source countries have been subjected to war and aggression by the United States and its European NATO allies over two decades. That is the root of the phenomenal migration to Europe. One can also factor in the NATO destruction of Libya in 2011 as another gateway for mass migration.

The EU is weaponizing the issue by distorting the cause: alleging that it is Russia and Belarus creating the human tide when in fact it has been illegal imperialist wars and regime-change operations conducted by the United States and the Europeans.

It is Poland and EU members that are deploying thousands of troops, tanks and barbed wire along the border with Belarus. This is an abomination of supposed “European values” and respect for international laws of asylum. The fiasco of Brussels financially supporting the construction of barbed wire fences is an international disgrace. Pointedly, this rush to ring-fence Europe comes exactly 32 years after the fall of the Berlin Wall.

The heavy-handed EU response is way out of proportion to the actual numbers involved. It is estimated that some 8,000 people have crossed over the Belarusian border into the European Union this year.

In 2015, the influx of an estimated one million refugees into Europe from U.S.-led wars in North Africa, the Middle East and Central Asia provoked an existential political crisis for the European Union. Eastern European member states like Poland and Hungary refused to share quotas for resettling asylum seekers. Germany took on a disproportionate share under Chancellor Angela Merkel’s “open door” policy. That policy had huge negative repercussions for the entire bloc.

It led to bitter tensions between member states and within states. The rise of populist anti-EU political parties was largely driven by a perception of foreign migrants inundating societies.

The EU desperately wants to avoid a repetition of that internal political crisis. Thus it is moving swiftly to make Poland and the Baltic states the “line of defense”. This explains the sudden militarization of border controls with Belarus.

The EU is drawing up another round of economic sanctions against Belarus next week, accusing its President Alexander Lukashenko of “gangsterism” and “human trafficking”. The possible imposition of sanctions on Russian airlines is also being mulled on the back of allegations that Moscow is colluding with Minsk in pushing migrants towards the EU. This is a reckless escalation of tensions.

Russia has flatly rejected any such allegations. Moscow says the EU needs to talk directly with Minsk to resolve the problem. One idea proposed by the Kremlin is for Brussels to provide financial aid to Belarus to implement a rational system of asylum application and resettlement. But the suspicion is that that is the last thing the EU wants to do. It simply wants to block any migration to avoid internal political strife. To do that, it needs to blockade Belarus. That blockade is having a deleterious impact on the economy of Belarus from normal border crossings for trade and haulage being stymied.

The underlying problem also goes back partly to the EU’s hostile policy towards Belarus. Brussels has controversially interfered in Belarus, along with the United States, in claiming that its presidential election last year was a sham. The EU refuses to recognize the re-election of Lukashenko and has slapped several rounds of sanctions on the country while claiming that an exiled opposition candidate is the real winner.

The Belarus government says it can’t afford to accommodate refugees coming through its territory en route to their desired destination of the European Union. Given the background hostility of the EU towards Belarus, it is understandable if Minsk is not exactly overseeing border controls. It’s a kind of “screw you” gesture to the European bloc for its interference in Belarus’ political affairs. Von der Leyen and other officials are going further by claiming that Minsk is deliberately organizing flights of refugees from various Middle Eastern countries, including Egypt, Jordan, United Arab Emirates.

Under international law, the EU is obliged to receive asylum seekers. The European governments have created millions of displaced people from their criminal wars and machinations along with the United States. But Brussels is shirking its legal obligations in order to avoid internal tensions with member states over immigration and populist opposition to capitalist corporate-controlled Europe. But by weaponizing the matter, the EU is recklessly winding up tensions with Belarus and Russia. The culprit is Europe’s moral and political cowardice to live up to its responsibilities by seeking to shift the blame on to others.