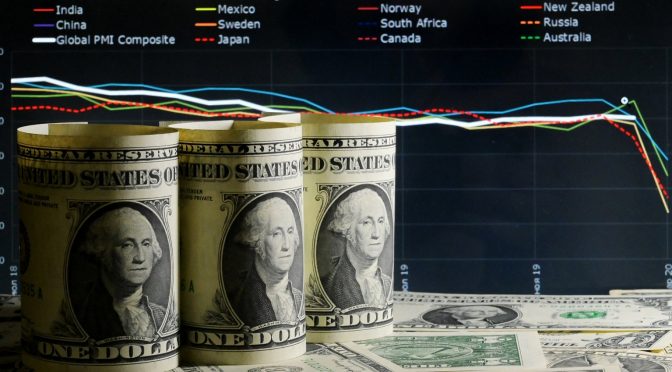 Understanding of the dollar’s world role is dominated by the ideas of ‘dollar hegemony’ and ‘US hegemony’. In this paper, based on their extensive past work, Radhika Desai and Michael Hudson reveal how these ideas are ideologies, not theories.

They reveal an understanding that is theoretically sound and accords with the historical record, a geopolitical economy of the international monetary system of modern capitalism.

They begin with a theoretical outline of how money operates under capitalism. They then consider how capitalism needs world money and, at the same time, makes its stable functioning difficult.

They then go on to trace the fundamental instability of the modern international monetary systems based on national currencies of dominant countries, from the gold standard to the current volatile and predatory dollar-centred system, and their close connection to short-term and speculative.

“Weak growth in the global economy, low and negative interest rates, the risk of endless stagnation and rising inflation, and prospects for a prolonged recession are, unfortunately, part of the economic reality. Clearly, the globalisation-based financial supercapitalism model, of which the United States was a beneficiary for quite a long time, and which relied on endless lending and financialisation, which turned the commodity markets into financial ones, has run its course.”

Radhika Desai is a Professor at the Department of Political Studies and Director, Geopolitical Economy Research Group, University of Manitoba, Winnipeg, Canada.

Michael Hudson is a Veteran of Wall Street; Distinguished Research Professor of Economics at the University of Missouri at Kansas City (UMKC).