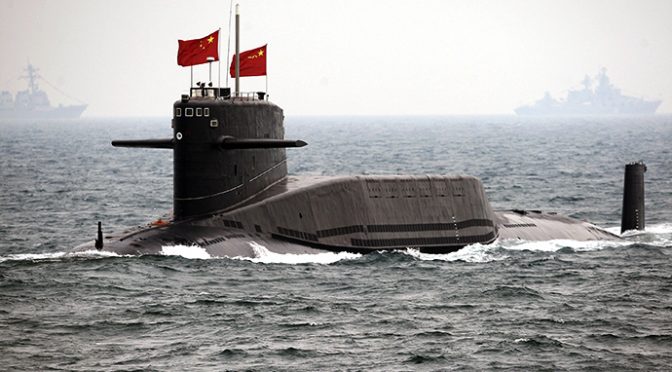 Just as soon as Obama ordered the departure of another aircraft carrier towards China, the latter released a retaliatory pronouncements by saying it is now playing with a “supersonic submarine able to penetrate US shores within 2 hours”.
This is very interesting because not to long ago, Neil Keenan announced that the Family has access to a beam weapon that could target any individual on Earth.

Published time: August 26, 2014 02:03
Edited time: August 26, 2014 02:35
Traveling from Shanghai to San Francisco in under two hours may sound like a fantasy, but China believes it’s figured out how to design an underwater vehicle that can make the idea a reality.
More worryingly, though, is the possibility that the technology will be used to develop even more dangerous weaponry.
According to the South China Morning Post (SCMP), the super-fast technology was developed by scientists at the Harbin Institute of Technology, and would allow underwater submarines or torpedoes to exceed the equivalent speed of sound under water – about 3,600 miles per hour.
The idea is based on the old Soviet concept of supercavitation, which involves creating a large air bubble around an object so that it could avoid facing too much friction and travel through water quickly.
Professor Li Fengchen said that when the vessel hits the water, one of its mechanisms continuously sprays a “special liquid membrane” all over the object’s surface. This membrane eventually wears off, but by the time the vessel reaches 46 miles per hour, it’s going fast enough to enter supercavitation state and generate an air bubble capable of helping it cover previously unknown distances.
“Our method is different from any other approach, such as vector propulsion,” Li told SCMP. “By combining liquid-membrane technology with supercavitation, we can significantly reduce the launch challenges and make cruising control easier.”
In theory, this means a trip across the Pacific Ocean would take only 100 minutes, while a transatlantic voyage could be undertaken in less than an hour.
continue reading »

China has sent an electronic surveillance vessel to international waters off Hawaii to keep an eye on a US-led Rim of the Pacific Exercise (RIMPAC) involving 22 countries, despite Beijing being one of the countries invited to participate in the drills.
The Chinese Dongdiao-class auxiliary general intelligence (AGI) surveillance ship is stationed outside US territorial seas but within the 200-nautical mile Exclusive Economic Zone, according to Captain Darryn James, chief spokesman for the US Pacific Fleet.
“US naval forces continually monitor all maritime activity in the Pacific, and we expect this ship will remain outside of US territorial seas and not operate in a manner that disrupts the ongoing Rim of the Pacific maritime exercise,” James told Bloomberg, adding that the ship is not part of the RIMPAC that is now under way.
“We’ve taken all necessary precautions to protect our critical information,” James said, adding that “this is the first time a nation has ever sent a surveillance ship near Hawaii while also having invited ships participating in the RIMPAC exercise.”