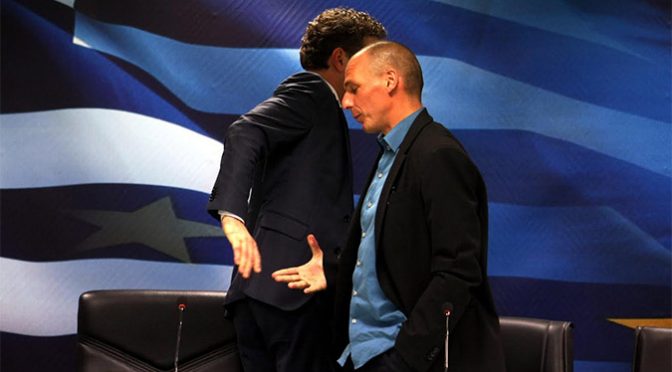 Original article:
“Nigel Farage commonly used “troika” to explain how the Greek government was run after the euro crisis in Greece. Farage pronounced “troika” as a derogatory term to refer to a “dictatorship” that is composed of a member of the International Monetary Fund, European Central Bank, and European Commission that “flies into Athens Airport and tells what the Greeks can or can not do.” [Wikipedia]
Greece, under the Syriza administration, is keeping its campaign promise of not taking any more bailout funds from the Union nor fully cooperating with it, effectively destroying the Union itself.
No less than Eurogroup chief Jeroen Dijsselbloem admitted this to be a fact.
Spaniards may be navigating g on the same track.
It is interesting to note that while Germany is threatening Greece about further “haircut”, or that the latter could be facing shortage of paper money soon, Russia is offering to bail Greece out should it decide to ask for it.
All of these mind-blowing events are happening within the first week only of Syriza Party”s hold on the Greek government.  Yanis Varoufakis, the new finance minister, is also a blogger.
Watch the BBC interview on Yanis Varoufakis, too.  It’s pretty clear the Cabal journalist is having a hard time.
END_OF_DOCUMENT_TOKEN_TO_BE_REPLACED