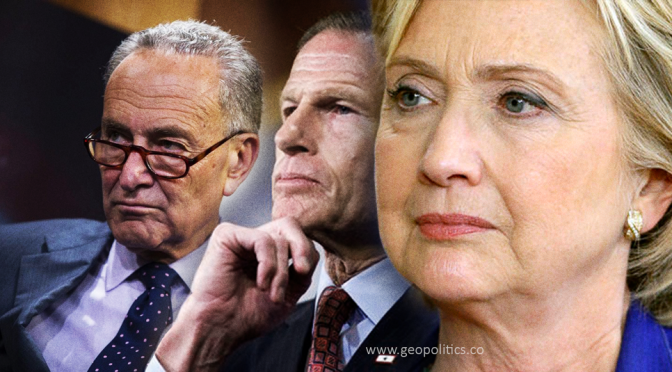 by benjamin
February 6, 2017
Multiple sources confirm that about 70 arrest warrants will be served on power brokers and politicians in Washinton DC, Virginia and New York this week shortly after Jeff Sessions is confirmed as US Attorney General. Among those to be arrested are Democratic Senators Chuck Schumer, Richard Blumenthal and Hillary Clinton’s vice-president pick Tim Kaine, Pentagon sources say.
These arrests will follow 474 arrests that took place in California last week as a pedophile ring that served Hollywood and West Coast elites was taken down. It is interesting to note the California arrests were only reported by local news outlets and completely ignored by the big corporate networks.

Former US President Bill Clinton is also reported to be “singing like a canary” and has provided evidence that will lead to the arrest of Hillary Clinton and many others, Pentagon sources say. Here is what a Pentagon source had to say on the matter “Hillary is toast as Obama refused to pardon, Bill snitched on her, and her prosecution has been ordered by Trump.” There are credible tabloid news reports that Hillary was caught trying to flee to Bahrain and stopped.

There are also preliminary reports saying a raid was made on Jeffrey Epsteins’ Caribbean sex slave Island and that 32 kids were freed and 8 traffickers were arrested.

There is also going to be a more hidden and brutal power struggle going on in the secret agencies as “CIA Deputy Director Gina Haspel was chosen to rendition to black sites and torture cabal, drug cartel and ISIS guys,” a Pentagon source says.
There is also, as is often the case, high level intrigue and skullduggery going inside the Vatican. This has been widely reported by the corporate media in the form of news that Pope Francis fired Grand Master Mathew Festing of the Knights of Malta in a “dispute over condoms.”

If you look at the membership list of the Knights of Malta,

The question is, were these events predicted long in advance or did the movements of the solar system suddenly change?