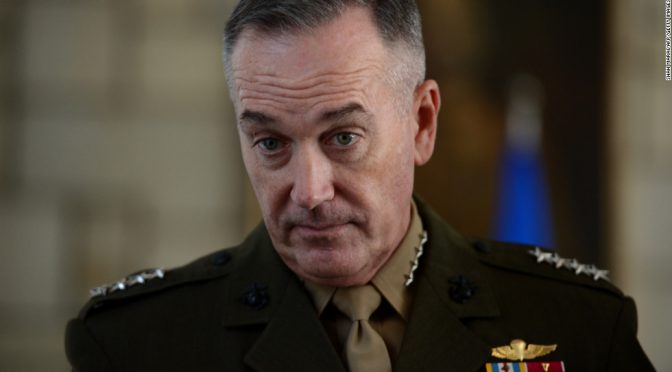 by benjamin
October 31, 2016
It is time to get out the pitchforks and guns folks and storm the palaces of the Khazarian mafia’s top gangsters. This has been confirmed in a letter many sources confirm that Chairman of the Joint Chiefs of Staff General Joseph Dunford sent to every member of the US military. In the letter Dunford says: “Every service member swears ‘to support and defend the Constitution of the United States’ and to ‘bear true faith and allegiance to the same.’”

This is a direct order from your top general to defend the constitution. What does the constitution say? It says “The Congress shall have Power To coin Money, regulate the Value thereof, and of foreign Coin,” and to “provide for the Punishment of counterfeiting the Securities and current Coin of the United States.” In other words you are obliged by your Constitutional Oath to go after the Federal Reserve Board and the crime families that own it and have been forging so-called US dollars ever since 1913. Furthermore, you must confiscate the vast amounts of property belonging to US citizens that these crime families have stolen.
In his letter Dunford also mentions “our deliberate and disciplined commitment to upholding the principle of civilian control of the military.” Since elections are being stolen and have been since at least the year 2000 that means civilians are no longer in charge so General Dunford is ordering you to go to Washington DC and force the return to civilian control of the government. That means restoring genuine democracy and freedom of the press so that an informed population can choose their own government. This government the military would then serve.
The people, government and armed forces of Canada stand by to help their American brothers and sisters in any way possible to free them from Khazarian gangster control.
West Coast high-tech oligarchs like Bill Gates, the owners of Apple Computer and Larry Ellison of Oracle Computer, people who got rich by actually creating things that make our lives better and not through fraud, have told the White Dragon Society they will support the move to take down the Khazarian mafia.
Hillary Clinton has already sent $1.8 billion to Qatar and plans to flee there soon, CIA sources say. However, neither she nor and other members of her crime family will be allowed to escape, the sources say.
This is what Pentagon sources have to say about the situation: “The Hillary silent coup has been defeated by a military counter-coup with [Republican Presidential Candidate Donald] Trump the broom and Wikileaks the instrument, backed by overwhelming lethal force and NSA spying.”
NSA sources confirm that Hillary Clinton is guilty of mass murder (Haiti, Fukushima, Libya, Syria etc.) and that she and her fellow gangsters must be stopped.
Speaking about the NSA, last week they requested me to leave my cell phone and credit cards behind and go meet with gnostic Illuminati representative “Alexander Romanov” at a secure spot so that I could get secret information. The NSA knows that nothing digital is safe and that is why the important stuff is transmitted in one on one personal meetings.
The message the NSA had was that Xi Jinping, Vladimir Putin and Barack Obama all take their orders directly from Baron Evelyn de Rothschild. CIA sources confirmed this.
Russian WDS members have also confirmed that Vladimir Putin, who is a fake, gets his orders from the Rothschilds.
Recently the internet has been sanitized and all the pictures of the so-called Vladimir Putin over the years have been fixed to make them look identical. However, if you go to a paper archive of photographs and compare them over the years you can confirm the original Putin died a long time ago and that there are or have been six different “Putins.”
The Russian sources also provided this bombshell information:
“The Russian Federation is the Rothschild’s’ Private Corporation, which was registered at the City of London in 1991 with the DUNS Number 531 298 725. The Director of this Private Rothschild Corporation is Medvedev Dmitry Anatolyevich. The true name of the Prime Minister of the Russian Federation is not Medvedev Dmitry Anatolyevich, but Menachem Aaranovitch Mendel.” The Russian sources say Menachem Aaranovitch Mendel is a Khazarian Jew.
The Russians sources say that over 7000 Russian military officers and patriotic associations have been given this information. The Russians also know the so-called President Putin has been going along with the partition of Russia and are saying that soon “The Russians, Ukrainians and Byelorussians will unite again in one single and very powerful state.”
As we know the UNITED STATES of AMERICA Inc. is a private Rothschild foreign corporation registered at 10687 Gasking Way STE 101, Manassas, VA 20109. Other Rothschild corporations with a DUNS number include the United Nations and the European Commission.
As Neil Keenan reported, Fed Chairperson Janet Yellen, Bank of England head Marc Carney and Malaysian Prime Minister Najib Razak are currently trying to use certificates forged by Wilfredo Saurin to pretend there is a million tons of gold backing them.
http://neilkeenan.com/neil-keenan-update-globalists-desperation-health-and-wellness-the-end-of-big-pharma/
They then intend to use this fraud to create $41 trillion of “money” to finance a massive global bribery campaign designed to keep their family in power, WDS sources say.
http://benjaminfulford.net/2016/10/31/the-message-for-the-khazarian-mafia-is-trick-or-treat-surrender-or-die/
Keep snorting Ben, and if you have the time, transfer to Manila where Duterte could whack you out.