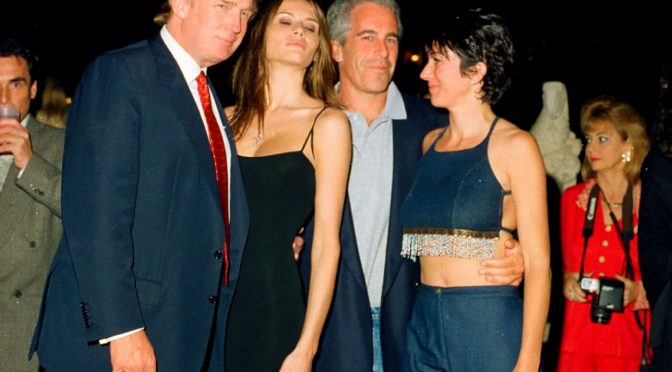 The U.S. political dialogue of late has been dominated by Mossad pedophile blackmailer Jeffery Epstein and Bush-era Iran Contra cover-up artist Attorney General William Barr, and this is probably no coincidence.

The choice of Epstein and Barr may well have been a deliberate nod to the Epstein-Barr virus.  Also known as mononucleosis or the “kissing disease,” Epstein-Barr (EB) was one of the first viruses engineered by the Nazi faction to cause cancer in targeted victims, according to Japanese military intelligence.

In this case, we have a staged public fight between Deep State agents Epstein (Mossad) and Barr (Nazi/Mossad) that seems to be deliberately causing a fatal malfunction in the U.S. political dialogue as portrayed by the corporate propaganda media.

Let us look behind the “botched” Epstein operation to see if it is actually part of something much more sophisticated.

The staging of Epstein’s “suicide” in a “suicide-proof” jail cell was immediately condemned by Barr, even though it occurred on his watch.  Immediately after the “suicide,” news was released showing that Epstein had a bone broken in his neck that usually only breaks when a person is deliberately strangled.  Following this, there was an “official” autopsy result showing that it was a “suicide” after all.

What is interesting about this operation is that opinion polls show that a majority of Americans, 42%, believe he was murdered, while only 29% believe the “official” story that he committed suicide.
http://www.rasmussenreports.com/public_content/politics/general_politics/august_2019/americans_say_murder_more_likely_than_suicide_in_epstein_case

This means that now only a minority of hard-core Kool-Aid-drinking Americans believe their government.

In fact, Pentagon sources say that Epstein has been allowed to fake his death in exchange for full cooperation in the coming takedown of the over 300 top VIPs who visited his Pedophile Island.  The deliberately botched “suiciding” of Epstein has allowed the Epstein underage sex investigation to be transformed by Barr into a murder investigation, the sources say.  This gives the U.S. domestic and military police much stronger powers, they say.

Certainly, the staged Epstein death was quickly followed by an FBI raid on Epstein’s island.  FBI agents on the spot deliberately opened a window to allow a drone to photograph a bloody bed inside the “temple” on his island.  It can be seen at around 2.22 minutes on the video at the link below.

We are also getting reports on the U.S. Navy Intelligence-linked information/disinformation site Sorcha Faal that Navy divers have found the remains of children’s bones on the sea bottom near Epstein’s island.  This means the scandal is looking ready to move from VIPs having sex with underage but post-pubescent girls to the ritual sacrifice of children, many of them pre-pubescent.

British MI6 intelligence sources warn that the use of Barr as a key person in the Epstein investigation could open it to abuse by “German DVD” operatives to take down political opponents with “Trumped-up” pedophilia charges.  The sources note that “Lord Edwin Brammal, the most senior living officer after the Queen in the British Armed Forces” and others recently had their reputations ruined by false pedophile charges.
https://www.theguardian.com/uk-news/2019/jul/22/operation-midland-four-top-public-figures-falsely-accused-by-nick

Nonetheless, these same sources agree that the world was facing a satanic enemy.  They said, “We see Satanism principally as an extremist (fanatical) religious cult like all others, but more so as a compromise and control mechanism for the very highest in the world social order.”

The same sources also said the Epstein case was “a fiasco on a global scale at the highest levels of society” and that “it will all come out.”  Also, “the Queen’s son [Prince Andrew] is implicated, for example, along with everyone else.  He should have been treated for his sex addiction and treated properly while in custody.”

While this British Royal source is clearly nervous about the imminent purge of high-level pedophiles, he does raise the point that Barr was in favor of secret military tribunals when the world is demanding public and fair trials.

Also, while arresting high-profile pedophiles is a good thing, we are still not seeing any corporate-propaganda media discourse about punishing war crimes like 9/11 or mass murder in places like Iraq and Japan.

The other dimension to this threat to the mass-arrest of pedophiles is of course financial.  In essence, the argument by the Washington, D.C. establishment can be boiled down in one dimension to “if you bankrupt us, we will arrest you for pedophilia.”

The increased pressure on pedophiles and people entrapped by Epstein is related to a British-led bloodline attempt to bring legal (anti-competition) charges against a large “off-the-ledger liquidity pool” connected to the EU, say MI6 sources.  This is a legal mechanism to control the banking cartel, the source explains, while warning that “many have died at the hands of the bankers” for trying to use this mechanism.

What people need to understand is that bankrupting the fiat bankers who own Washington, D.C., the EU, and Japan does not threaten the healthy part of these countries, including the non-corrupt bureaucrats and politicians.  In fact, bankrupting the bankers would liberate these countries from Babylonian debt slavery, something many in the Western military/intelligence world know.

The U.S. military is going to remain fully funded throughout the upcoming new campaign to finally bankrupt the political circus in D.C. and its ringmasters in Tel Aviv and Switzerland.  This can be seen by looking at the oil exports of the U.S. military protectorate of Saudi Arabia away from the U.S. (which pays with IOU’s) to China (which pays cash).

According to TankerTrackers.com, which tracks oil tankers and shipments based on satellite imagery and the ships’ automatic identification systems, Saudi Arabia exported a whopping 1,802,788 barrels per day (bpd) to China in July 2019, up 96% compared to 921,811 bpd in August of 2018.  By contrast, exports to the U.S. in July were 262,053 bpd, down nearly 62% from 687,946 bpd in August of last year.
https://www.cnbc.com/2019/08/15/saudi-arabia-dramatically-changing-its-oil-exports-to-china-and-the-us.html

The proposal by Saudi Arabia to create a $500 billion Massachusetts-sized new country there that circumvents existing taboos against genetically improving human beings and will introduce all sorts of other suppressed technology as well, shows that the U.S. Central Command at least is trying to start a breakaway civilization.
https://www.zerohedge.com/news/2019-08-09/why-saudi-arabia-giving-land-size-massachusetts-worlds-first-independent

The D.C. establishment, meanwhile, is growing more desperate by the day.  Domestically, an increase in the number of mass shooting incidents (be they real or fake) has run into decreasing returns as the public becomes numb to them.  An attempt to start false right/left staged riots in Portland, Oregon has also failed.
https://apnews.com/423e0ee1018942a59e218a800b30b59f

They are also trying to destabilize Hong Kong in an effort to get bargaining power with China.  The protests there started as a legitimate move by Hong Kong citizens to nullify a law that would allow them to be extradited to China.  Hong Kong is populated largely by people who fled Communist China, so that law really hit a nerve.  However, after China backed down, the protests degenerated into violent action by professional agents provocateurs paid by the Zionists, according to Asian secret society sources.  The aim was to force China to use excessive force and thus ruin its international image, the CIA sources admit.  However, the Chinese learned from the Tiananmen Square protests in 1989 and are using conventional anti-riot strategies like water cannons and the arrest of violent people to keep these protests civil.

The Hong Kong moves came as Trump was forced by domestic opposition to back down on tariffs against an additional $300 billion worth of Chinese goods.  Anybody who knows the real world understands that a bankrupt person who uses unpayable debt to buy stuff (like the corporate U.S.) is not in a strong bargaining position.  The people who benefit from distributing cheap Chinese goods in the U.S. understand this.
https://www.zerohedge.com/news/2019-08-07/trump-losing-trade-war

The U.S. is now paying 94% of all global yields as it desperately tries to keep itself afloat.  In financial markets, paying more interest than others is a clear sign of deteriorating creditworthiness.
https://www.zerohedge.com/news/2019-08-16/us-share-global-yields-has-climbed-94

However, there is going to be a huge fight this year that might finally pull the plug on the EB-infected Washington, D.C. political circus.  Certainly the Commonwealth, the Vatican, the Russians, and the Chinese, among others, want the Zionist troublemakers put out of business permanently.  The Zionists will fight this tooth and nail.

Please rest well for the rest of your summer, because this autumn looks likely to be more hectic than usual.