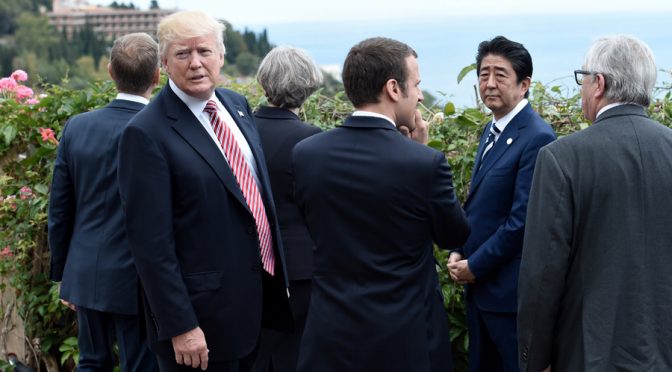 The split in the Western power structure between the meritocratic Gnostic Illuminati and the Khazarian bloodline families was put out for all to see during last weekend’s G7 meeting.

by benjamin
May 30, 2017
The split in the Western power structure between the meritocratic Gnostic Illuminati and the Khazarian bloodline families was put out for all to see during last weekend’s G7 meeting. For those who follow normal diplomatic protocol, the war of words at and after the meeting, between the Germans and the French on the one side and the British and the Americans on the other, was unprecedented in the post war era. US President Donald Trump, for example, called the Germans “very, very bad,” and threatened to stop importing German cars to the US.

He also failed to mention Article 5, the collective defense clause, in his speech to NATO, implying basically that Russia could just go ahead and march into France and Germany without worrying about the US. Without US help, Germany and France would fall to Russia in a matter of weeks.
German Chancellor Angela Merkel, for her part, said “Europe must take its fate into its own hands,” after the summit and noted that Britain, with Brexit and the US, with Trump, were no longer reliable partners. The German slave, French President Emmanuel Macron, followed his masters’ orders by deliberately snubbing Trump and trying to hurt his hand during a handshake.

These sorts of shenanigans, as well as the civil war raging in Washington DC, prompted Chinese official media to comment that Western democracy “is crumbling.”

The overall tone of the article also lends support to NSA allegations that Chinese President Xi Jinping works for the Rothschilds because it adheres closely to the US corporate media lies about Trump and seems to predict Trump will be impeached over “Russia.” The Chinese, of course, are bitter about Trump because they invested heavily in Hillary Clinton and were promised Japan as a reward if she won.
What is really going on here in fact, is a split between countries still under Khazarian bloodline mafia rule and those who are moving towards meritocracy. In other words Merkel, who as Hitler’s daughter is a member of the Saxe-Gotha-Rothschild family, is circling the wagons for Khazarian bloodline rule in Europe even as the US shakes it off. The UK and Canada, of course, retain symbolic bloodline rule but it is publicly supported there plus it is in the open for all to see; not hidden behind lies and murders as is the case in Germany, France, Italy and elsewhere.
Inside the US, meanwhile, the battle against the Khazarian rear-guard still holding out in Washingtion DC is nearing its final stages, Pentagon and agency sources agree. Zbigniew “it’s easier to kill a million than convince a million” Brzezinski “was sent to meet his master rocky [David Rockefeller],” the sources note. Brzezinski’s death means that the main architect of the anti-Russian campaign of hysteria in DC is gone and that this campaign will start to wither. In fact the Washington DC elite are now in a state of sheer panic as word has been put out the so-called Russian who leaked Hillary Clinton’s e-mails was none other than Democratic Party staffer Seth Rich, who was murdered as a result.

The death of David Rockefeller means that his entire control grid, from the murder brigades to his Council on Foreign Relations, Bilderberg and Trilateral Commission mind control outfits, is collapsing. That is the real reason for the panic.
Furthermore, the efforts by the Khazarian mass murdering Neo-con faction to regain control over the FBI, and thus internal policing in the US, were defeated when “Israeli dual-citizen Mossad agent Joe Lieberman” was blocked from being put in charge.
On top of this, Jared Kushner, the top Khazarian agent in the Trump regime, is in deep trouble, multiple sources agree. “Kushner may not just get fired but prosecuted,” the Pentagon sources say. Military police and Congress are both probing Kushner as well as Trump, Lockheed Martin, Goldman Sachs and former general David Petraeus for receiving or handing out kickbacks from the $400 billion arms deal announced with Saudi Arabia, they say.
Speaking about Saudi Arabia, perhaps now is a good time to look at the overall result of Trump’s visit to the main monotheistic power centers of Arabia, Israel and the Vatican to see what is happening in the bigger picture of things.
The first thing to note is that Trump’s call for an Arab NATO confirms the US and Russia have reached a deal over splitting control of the Middle East and its oil resources. In this split, Russia gets influence over Turkey and the revived Persian Empire that includes Iran as well as parts of Iraq, Syria and Lebanon. The US gets Israel, the Arab states of the Gulf Cooperation Council, Jordan and Egypt. For the Pentagon it means their private gas stand remains available to them to fill their war machines and their coffers.
The fact that Trump met the pope and that the conversation went better than expected also underlines the existence of a Vatican/Russian and US patriotic Christian alliance against the Satan worshipping Khazarians. It turns out that Pope Francis calls Lucifer God because, according to Catholic doctrine, Satan lost the title of Lucifer after his rebellion.
Trump also left a message to the Khazarians during his visit to Israel by refusing to let Israeli Prime Minister and leading Satanist Benyamin Netanyahu have a photo taken with him at the wailing wall, according to the Pentagon sources. The message was that the old city of Jerusalem is occupied territory that must be returned to Palestine, they explain.
Trump was also read the riot act about war when he visited the Pope, according to Jesuit sources. He was warned not to even think of using his so-called Arab NATO as an excuse to try to start World War 3 between the Arabs and the Iranians. Trump knows he will be removed from office if he tries, the sources say.
Melania Trump also made her allegiances clear during the trip by refusing to veil her head in Saudi Arabia or during a visit to the holocaust (burnt offering) museum but donning one for her visit with the Pope. In other words, her message was that the controlling force in the Trump presidency, as far as she was concerned, was Christianity and not Judaism or Islam.
Russian President Vladimir Putin also last week made it very clear that driving force of his regime was Christianity. At a ceremony consecrating a church that was built to mark the 100th anniversary of the 1917 Bolshevik revolution Putin said “this church is dedicated to the Resurrection of Christ, and to the new martyrs, in other words, to the memory of those who suffered during the years of anti-religious persecution and who died during this time of repression.”

Needless to say, the people behind the Russian suffering during the 20th century are same Satanists who are behind the war mongering Neo-cons who have done so much to turn the United States into the main source of world evil during the 21st century.
Overall, the Satanists are facing final defeat in the West so now the main battle ground against them is moving to Asia.
Here the Satanists attacked the Philippines with their ISIS mercenary army because Philippine President Rodrigo Duterte has not only kicked out the Khazarians with Chinese and Russian help but he is also shutting down their drug dealing and pedophile operations there, the Pentagon sources say. Duterte “arrested 3,000 online child traffickers after meeting Trump,” they say. Maybe that is why the Khazarian Satanist controlled media released the classified transcript of a phone call between Trump and Duterte.

The other thing still simmering in Asia, of course is the North Korean situation. Japanese right wing sources close to the Emperor are now saying that North Korea has long been working with Israel to “create Babylon 2.0” i.e. enslave the world to the Khazarians.
There is also a very intense power struggle going on under the surface both in China and Japan multiple political and underworld sources here claim. The media and part of the establishment in Japan is clearly on a campaign to remove Prime Minister Shinzo Abe by exposing no less than six separate scandals, mostly shady real estate deals, related to him. A source close to Abe says he is very ill but is determined, if necessary, to die in office. Rothschild slave Finance Minister Taro Aso wanted to replace Abe but his main backer, LDP heavyweight Kaoru Yosano, was killed last week, Japanese right wing sources note.

Also, a right wing source says the person who recently met the Emperor to ask for the release of funds was not Rothschild servant Michael Greenberg, as reported by this newsletter, but was in fact former director of the Defense Intelligence Agency Michael Flynn, who the source claims, said he was sent by Henry Kissinger. He left empty handed, he says. In any case, Kissinger himself will have to personally meet a member of the White Dragon Society to prove that he is still alive and is not just a computer graphic generated by an artificial intelligence.
In China, meanwhile, sources in the Shanghai, Guangdong and Taiwan factions of the Chinese underworld are all saying that a campaign to remove President Xi Jinping is under full swing. They say his unpopular anti-corruption campaign has just been an excuse to remove rivals.
The Chinese have also been accelerating their plans to escape from the Khazarian controlled Western financial system following the recent downgrading of China’s credit rating by Moody’s. The Chinese are behind bitcoin, according to Asian secret society sources, which is why bitcoin surged in value after the downgrade was announced. It was like the Chinese saying the rickety Khazarian owned Windows Vista based SWIFT international payments system was obsolete. The Asians now support gold-backed crypto-currency.