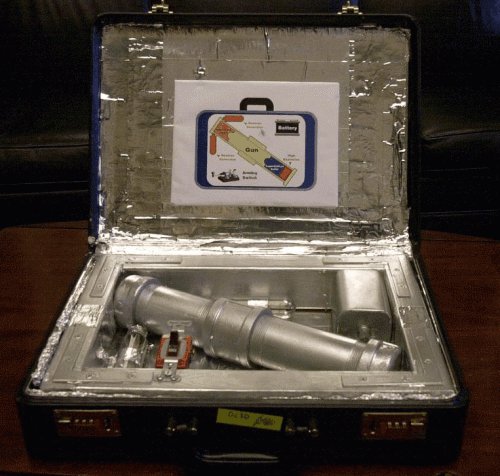 Update, 06jun2011: Unnamed source sent this photo of a suitcase nuke, one of three that are in Europe per latest intel. The same bomb was being detonated in the sea bed near Fukushima last March 11, in conjunction with HAARP, to initiate tsunami.

Update (01jun2011): The intelligence source that told us the BIS was going to be targeted with a nuclear explosion says the attack has been cancelled because a $136 million payment was made to the group making the threat.

A Western military invasion of Saudi Arabia’s oil-fields is scheduled for this summer, according to CIA and MI6 sources. The aim of this invasion will be to try to grab control of the world’s oil supplies and simultaneously provoke Pakistan and then China into starting a World War, the sources say.

Meanwhile, Western intelligence officials say that “Al-Qaeda” is planning to hit the headquarters of the Bank for International Settlements in Basle, Switzerland with a Nuclear weapon on or around June 1st, citing a top “Al Qaeda” official as his source. The leaks of these and other dramatic “planned events,” are probably posturing in preparation for the announcement of the new financial system.

However, the Saudi Invasion plan has been corroborated by a broad variety of sources within the BIS, the Rothschild family and the agency sources mentioned above, making it a high probability event. This move is an attempt by the money printing side of the leading Khazarian families to maintain control over the financial system of the West by seizing the world’s key oil resources. They know Pakistan has promised to protect Saudi Arabia and China Pakistan so clearly they are hoping this move will finally set off World War 3 and their long sought “end-times” battle between “Gog” and “Magog.” Such a war would stave off their imminent bankruptcy and loss of power.

The threat to nuke the BIS is from a group that claims to be opposed to these plans. We have been able to independently confirm that at least some of the members of this group are connected to both intelligence agencies and the international drug mafia. Below is the text of e-mails received from them and forwarded to various intelligence and police agencies:

There are 4 rogue nuclear devices which were removed from the Kursk Submarine back in 2000. Everyone must understand that the nuclear devices controlled by various militaries around the world are NOT at the disposal of our enemies. All of those devices are accounted for, every single last one of them, and all of the militaries around the world are sitting on the fence waiting to see how this will play out. So, one of the 4 devices was already detonated and caused the Japanese Earthquake. 3 remain. My information is that one ( or more ) will be detonated on June 1st, blamed on Al Qaeda in an effort by the Satan worshiping Obama Administration to start WW3.

B.I.S. is about to turn to dust. This just came in directly from the new Al Qaeda #1.

Firstly regarding the nuclear device which will be detonated imminently. The best lead we have is that an individual called Bob Swan can provide information leading to its discovery.

Our best information is that Bob Swan can be found at the following location :Flat 1, 2 The Mount. St. Leonards on Sea, East Sussex, TN38OHR, England.

Secondly, An informant from the USA Navy Air Craft Carrier Carl Vincent, Recently docked at Manila Bay, Philippines, the ship which allegedly dumped Osama Bin Laden’s dead body at sea, has informed Mi6 Agent Peter Stevens that the entire operation in Abottabat, Pakistan was a fabrication. According to multiple sources including the NSA, FSB, and family, confirm that Osama Bin Laden has in fact been dead since Dec13, 2001. The current United States Administration is little more than a fraud that does the bidding of Their Rothschild Masters and are on the verge of initiating WW3 unless something is done.

A CIA source dismissed these warnings as bluffs and said they were not to be taken seriously. However, it is very clear Japan was attacked with a sea-bed nuclear weapon that triggered an Earthquake and Tsunami and these sources did warn us beforehand that Japan was the imminent target of nuclear terror. The warnings were dismissed at the time.

It is also worth noting many attacks can be prevented by issuing warnings beforehand so even if nothing happens, it is worth passing on these messages. It is further worth noting the sudden change in tone between Obama and the UK Government following his visit last week. The President who returned a bust of Winston Churchill given by the UK and who was snubbed from royal wedding invitation list was suddenly kissing British ass big time and talking about Anglo Saxon solidarity.

There has also been a sudden change in the general attitude towards Israel with Obama and practically everybody else (except for Canada’s shame, the Zionist slave and arch-traitor Harper) has been twisting the Israeli’s arms into finally reaching a peace agreement with their neighbours. This is a sign of a clear loss of power by the radical right wing Zionist lobby.

On a different note, G8 meeting last week failed to discuss, as originally planned, replacing the US dollar with a new currency controlled by the IMF. This plan was endorsed by Treasury Secretary Geithner and other Federal Reserve Board Crime Syndicate members but has now apparently been quietly trashed along with DSK’s career. Instead, the dollar is now expected to be purged of fraudulent book entries before becoming commodity-backed and melded into the new financial system.