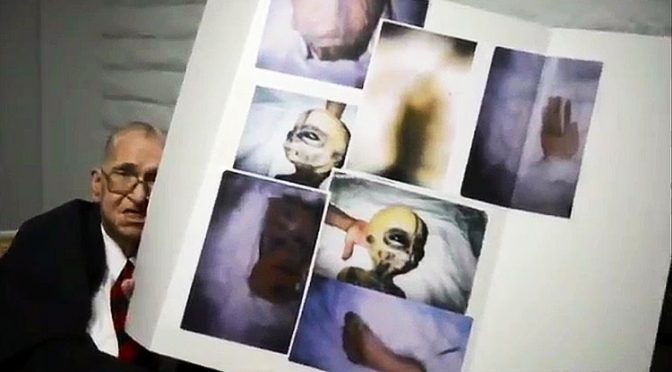 There is a renewed attempt to force the US Congress for ET disclosure and the materials and witnesses coming forward are more than overwhelming.
Join the Twitter Storm for Disclosure and call your congressman today!

Not long before Boyd Bushman passed away on August 7, 2014, he agreed to be video recorded for a short documentary where he openly spoke about his personal experiences with Area 51, UFOs, aliens and anti-gravity ideas. (Video below)
Boyd Bushman was a retired Senior Scientist for Lockheed Martin. He had an impressive forty year career where he was awarded many patents while working with defense contractors Hughes Aircraft, General Dynamics, Texas Instruments and Lockheed Martin.
**You can view some of those patents here. There is also another one you can view linked in this article below.**
In the last video footage (ever) of him recorded right before his death, he shared some fascinating information and photos about Area 51, Aliens, UFO’s and anti-gravity. His images of aliens will of course raise controversy given the mixed beliefs that exist amongst people about the existence of them, but could perhaps be among the most fascinating evidence out there -and from a decorated and credible source.
After all, this wouldn’t be the first time highly ranked individuals have spoken out about this type of stuff. The statements made by them seem to corroborate with all of the official documentation about UFOs that’s already been released for public viewing. Dozens of governments around the world have already disclosed this existence.
“We already have the means to travel among the stars, but these technologies are locked up in black projects and it would take an act of God to ever get them out to benefit humanity… anything you can imagine we already know how to do.”  – Ben Rich, Former Head of Lockheed Skunk Works
“Nature never uses English, it doesn’t speak any language, but yet it’s talking to us all the time. The key thing is to identify what it’s saying.” – Boyd Bushman, Former Senior Research Scientist Engineer and Inventor at Lockheed Martin Aeronautics.

Boyd’s Wikipedia page has been disputed for accuracy. The reason given is that the information is not properly sourced. The controversy seems to stem around Boyd’s actual involvement in Lockheed Martin. Researching around for a while I was able to find patents filed by Lockheed Martin with Boyd Bushman’s name on it. Again, there are more linked earlier in this article as well.
As per Bushman’s claims, below is an image of plans for the first reverse engineered space craft that Lockheed Martin, and himself, put together.

Below is the video of Boyd’s final thoughts on some really fascinating subject matter. If this information is intriguing to you, you may want to check out the archives of articles we have on UFO’s and other topics that are related. The UFO topic is one that could be very compartmentalized. This information might not even be the tip of the ice berg, we’ve heard other statements from interesting people about multiple races.

Former NASA astronaut and Princeton Physics Professor Brian O’Leary has also spoken out about UFO’s and aliens which could lend more substance to what Boyd is saying above.

Would you like to know how you can defeat Ebola and the depopulation agenda?

The Congressional Hearing Initiative is a
project of Paradigm Research Group

Congressional
Hearing Initiative
(CHI)
On November 5, 2014 538 video copies of the full record of the Citizen Hearing on Disclosure (CHD) were shipped to all members of the United States Congress.  Shortly after these 10-DVD sets are received, PRG’s registered lobbyist, Stephen Bassett, will renew direct engagement of the U. S. Congress for the first time since 2000 seeking new congressional hearings on extraterrestrial related phenomena. This will be a concentrated three-month effort accompanied by substantial media coverage.  If congressional hearings are held, it is quite likely the truth embargo will collapse.
You can help this initiative succeed.  Here’s how.  IMMEDIATELY begin sending tweets, Facebook posts and emails to members of Congress asking they:

This is called a tweet-email storm, and it can be very effective.  It needs to continue for at least 30 days with heavy emphasis on the first ten days.  Below is everything you need to know to participate:

Guidelines for the CHI Tweet-Email Storm

Sample Tweets (140 characters. For emails just expand.)
[Note: Twitter does have excessive tweet blocking, so pace yourself and spread it out over time.]Remember: Hashtag #Disclosure

The Congressional Hearing Initiative is a project of Paradigm Research Group