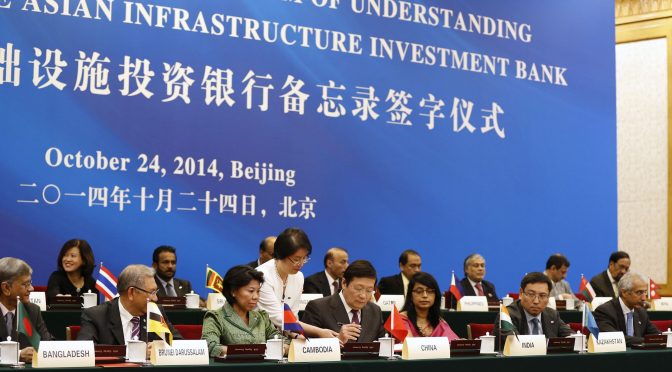 If we try to look at how China rose from the turmoil of the Jesuit-Mao era to the economic giant it is today, we may learn the true wisdom of Oriental methods. One of the tenets of Asian martial arts is to use the superior enemy force against itself.
Who would realize that a cheap labor force would be a potent weapon to destroy the economic superiority of the West and as a consequence, neutralized its military might, too?
Yes, we are aware of articles saying that the NWO banksters are just moving their business interests to Asia, and all is just for show. [We do read your comments and we care about and do share your sentiments here.] But should we ignore the facts that conflicts were constantly introduced just to keep us all here from attaining enduring peace?
The territorial conflicts between China against japan and the Philippines were all Cabal instigated, and it is hard to understand why the Cabal would want conflict to a place they are moving their investments into.
The truth is: The Cabal has no investments here for they don’t own anything, even from where they came from. The assets were lent to them in the past but they tried to steal it as their own, and developed their technologies only to wage war around the world with it.
For those who are not happy with the recent developments, i.e. the integration of enemies of the world into the new financial system, you have all reasons to be. If there are people who should be sad the most, it’s us, i.e. the real victims of centuries of White Man’s aggression [here, and here].
But you will never experience counter-aggression as a form of extracting justice for all the wrong done, because our leaders know better.
We can and must continue our vigilance upon world affairs because this is the price for our freedom. We could not go back to our apathetic behavior, no more. Planning and doing what’s best for the planet is our common responsibility.
Both China and Russia understand that the only way we can win the war for humanity is to involve as many people as we can. That’s why Russia has RT channel in the US and in UK, wisely using the “press freedom” mantra of the West as its own weapon to enlighten the people of these countries so that finally they would see who the real enemy is. They understand that the people must be empowered intellectually.


What these BRICS countries are doing right now is to literally, financially and militarily give peaceful coexistence a chance.
In the process along this new Asian controlled economic integration, the Western Oligarchy will have no choice but to find their methods unwise and unsustainable. But they will keep it to themselves out of pride, of course.
Eventually, old age will conquer them all, while their sons and daughters they’re leaving behind will hopefully start to embrace those peaceful Oriental values and aspirations, and with great hope, this planet will finally know peace.

China Voice: China-proposed AIIB is a gift to world

English.news.cn   2015-03-19 16:51:44
BEIJING, March 19 (Xinhua) — As countries continue filing applications to join the Asian Infrastructure Investment Bank (AIIB), the eagerness for participation indicates an unmet niche for such a service.
Decision by nations outside of Asia, including Britain, Germany, France and Italy, to join the program is evidence of the huge financial demand in Asian infrastructure.
Statistics from the Asian Development Bank (ADB) say that between 2010 and 2020, around 8 trillion U.S. dollars of investment will be needed in the Asia-Pacific region to improve its infrastructure. However, the ADB is only able to provide about 10 billion U.S. dollars annually in the category.
The AIIB, with an expected initial subscribed capital of 50 billion U.S. dollars, is therefore complementary to the ADB and other multilateral financial institutions including the World Bank.
The world needs the AIIB and the AIIB also wants to embrace the world.
The applications from the four European nations, which are all G7 members, are welcome because their participation means more diversified shareholders and advanced management that is key to enhancing the AIIB’s structure and international image.
But such a bank, designed to bring about a win-win situation, has drawn concern from the United States that the new institution should incorporate the high standards. When Britain announced the decision to join, the U.S. knitted its brows and remarked that the long-time partner has been constantly accommodating China.
The act perplexes China because the U.S. government has been urging China to exercise leadership compatible with its growing strength by providing more resources for development and other global goals.
Given the existing global financial system, which is being driven by Asian economies, one of the most valuable gifts that a rising China can offer to the Asian community, as well as the world, is its expertise and experience in infrastructure accumulated over the past decades.
At a news briefing, Foreign Ministry spokesman Hong Lei called on all countries interested in joining the regional investment bank to make their decisions before the deadline on March 31.
According to Hong, China, Japan and the Republic of Korea will exchange views on issues of mutual interest during the three-way foreign ministers’ meeting on March 21, with the possibility of discussing (AIIB-)related issue.
Rather than standing outside frowning, the U.S. might as well consider the choice of getting on the boat to share its rich experience in managing international banks.
This will be a blessing not only for Asia, but also for the U.S. and the world as a whole.
Related:
Commentary: Washington, what are you waiting for?
BEIJING, March 18 (Xinhua) — Welcome Germany! Welcome France! Welcome Italy!
Despite a petulant and cynical Washington, the three leading European powers decided to join the Asian Infrastructure Investment Bank (AIIB) headquartered in Beijing on Tuesday. Full story
Germany, France, Italy to join China-proposed AIIB, following Britain’s lead
BRUSSELS, March 17 (Xinhua) — Germany, France and Italy on Tuesday confirmed their respective intentions to join China-proposed Asian Infrastructure Investment Bank (AIIB).
The three countries’ decision came in the wake of Britain’s application last week to be a founding member of the 50-billion-U.S.-dollar bank.   Full story
U.S. says not reconsidering joining Asian infrastructure bank
WASHINGTON, March 17 (Xinhua) — The United States is not reconsidering entry to the Asian Infrastructure Investment Bank ( AIIB) despite the agreement by more of its European allies to join the China-proposed institution, the State Department said on Tuesday.
“I’m not aware of a reconsideration,” spokeswoman Jennifer Psaki told reporters at a daily news briefing.   Full story
source »
One of the significant sources of funds for the Cabal is the healthcare industry which registered a whopping $2.7 trillion in 2011, and is projected to soar to $3.6 trillion in 2016, in the US alone. We believe that this is just a conservative figure.
We can avoid using drugs, defeat any viral attack and scaremongering easily by knowing how to build our own comprehensive antiviral system. Find more about it here.

2 thoughts on “AIIB is A Gift to the World”