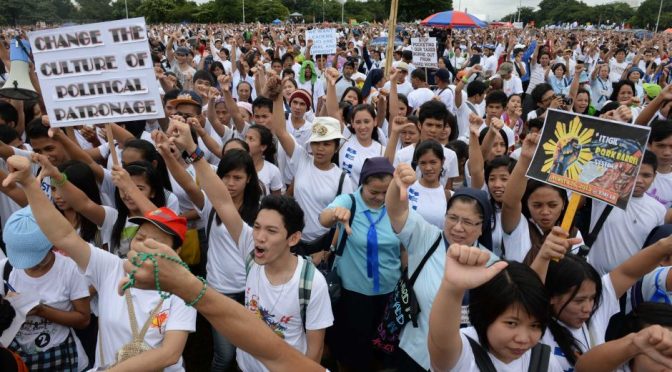 If you are a tourist entering the Manila International Airport, you should not let your guard down as everybody from the terminal and into the driveway are out to milk you of your R&R budget.

Some baggage inspectors were terminated for having planted bullets into passenger luggages which they could then leverage for extortion money. One case has resulted to a 5-day detention of one Caucasian tourist. If you are a victim of this nefarious scheme, please accept our sincere apology.
Security personnel also have connections to, or are themselves owning, a fleet of taxis that ask for higher than the regulated fare rates.
Otherwise, this group of islands is an absolute paradise to indulge oneself to.

Greater Manila is the role model for massive cultural deterioration of the country for being the center hosting an organized crime syndicate in sleeves and tie gracing the halls of power, and discussing how to efficiently subvert the system that they themselves created, and conduct graft and corruption in broad daylight throughout the country.
Right after the dictatorship of the late president Ferdinand E. Marcos was toppled in a CIA-Vatican led “Yellow Revolution” dubbed as People Power in 1986, no other leader has ever replicated the massive development he had made.

Marcos’ Vision Thwarted by His Own Trusted Friends

Some of the notable infrastructures and other factors that would have propelled the country to full industrialization during the Marcos dictatorship were the following:

The multi-million peso corruption in the agriculture sector [the biggest sector in the country] known as PDAF Scandal has highlighted the pervasiveness of this corrosive culture of corruption that, to the poor majority, only a benevolent authoritarian government could eradicate.
The failure of Marcos was never personal but he simply trusted the wrong people, those same people who would later on administer the systematic plunder of the whole economy in favor of the Oligarchy and foreign companies.
Make no mistake about it, i.e. the present administration does enjoy positive economic analysis, views and ratings from foreign mainstream media and credit rating agencies. But that’s only because the government is in full cooperation with the Global Corporatocracy and nothing else.
When the country was ridiculed as the “sick man in Asia”, or “a country of 60 million cowards and one stupid” back in the 70s, the exchange rate was only 7 pesos to a US dollar. Now, that we are labeled as “the rising tiger of Asia” the exchange rate is at 47 pesos to a US dollar.
Any talk about our local GDP achievements reflect only those of the pockets of the super-rich 1% in Imperial Manila, those same people who are fully cooperating with the Khazarian Mafia for their own benefit and at the expense of the ordinary people.
These are the accomplishments that the Oligarchy is so proud about..

The question of land ownership is a very sensitive issue in this part of the world considering the proliferation of fake land titles that even those in the Oligarchy are all accused of. The likes of Villar, Ayala, Rodriguezes and Ortigases are said to be holding highly questionable real estate assets. They are all landgrabbers as legal court documents will show.

And when homeless factory workers and urban center dwellers try to occupy vacant lots within the metropolis, they are driven out by the police who know nothing better, or they get their shanty houses burned while they were deep asleep in the dead of the night.
The majority of those who are at the lower end of the society are now clamoring for a heavy handed leadership to cut off the cancer of graft and corruption so pervasive in all three branches of the government.
They have pinned their hopes in one person who has proven himself capable of transforming the largest city on Earth from its chaotic past into one of the most livable city in Asia.
However, as of this writing, Mayor Rodrigo Duterte of Davao City chose to ignore the overwhelming public demand until the deadline for filing of candidacy to the Commission on Election has lapsed on October 16th.
Believe it or not, even those in the local progressive media were doing their best to convince the man to run, but the latter simply refuses raising health and old age issues. Some artists have also pooled their resources and talents together to produce this appeal…


What we are seeing here is a major dilemma of having to deal with a collapsing society and a possible uncomfortable scenario of having to live within a dictatorship.
The man, i.e. Duterte, which the people have chosen to lead them has said it on many occasions that once he gets the position of the presidency, he will close down the Senate and the House of Congress in the event that the Legislative Branch will not cooperate fully on his radical policies.
He is now claiming that he has the loyalty of the reformist officers of the military and the police, and that he will not shy away from proclaiming Martial Law just to restore order in the country.


This man is not just all hot air as shown in this senate investigative hearing about rampant rice importation and smuggling not too long ago, where he threatened to kill the rice smuggler himself who was sitting just across him during the said senate hearing..


His track record can speak for itself…

Fortunately for the masses, due to a provision in the Electoral Law where any political party can still file a substitute candidate until December 10th this year, the people of this country, if indeed they are ready and clamoring for a benevolent dictatorship as the antidote to the “exceptionalist” rule of the Oligarchy, they still have enough time to convince the mayor to run for the presidential election which will be held on May next year.
The desperation is so high, and this is the first time that a massive number of people themselves are the ones clamoring for a specific politician to run this country. Understandably, said politician is being subjected to negative rumor mongering from the yellowish Oligarchy camp to which said authoritarian candidate has acknowledged in the most unorthodox way.

Here is one overseas worker asking for Duterte to be the next president so she could return back to her family for good.