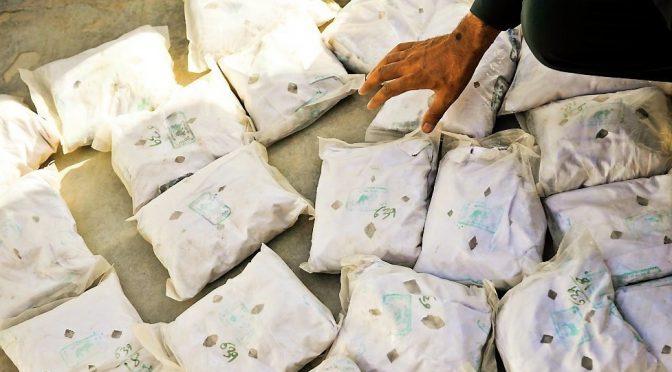 One of Khazarian Mafia’s main sources of funds is the illegal drug trade that is run by its errand paramilitary and terror groups.
The heroin business is also the favorite enterprise of empires seeking to destroy and profit from targeted countries as a means of conquest.

Turning a country into a nation of addicts and being able to convince the rest of the population that bending their knees in worthless rituals is good,  economically and culturally, that society is conquered.
Just recently, a large delivery of Turkish heroin was foiled at the Bulgarian-Serbia border.
The terror group and its management have decided to increase the flow of illegal drugs to offset the losses in the oil smuggling business.
This border interception and the recent shooting down of Russian civilian and war planes have made the once covert geopolitical war to go mainstream, which recently requires the Russian to fire cruise missiles from a submarine for the first time, just to defeat CIA spy satellites and prevent ISIS militants from knowing the approaching hell.
This multi-dimensional Russian-led offensive is gaining ground and is truly inflicting huge damage to the terror-based, illegal oil and drug financed, Grand Chessboard NWO strategy of the Khazarian Mafia.

Busted! Serbian Border the End of the Road for Smuggled Turkish Heroin

10:36 08.12.2015
Serbian police captured at least 16 kilograms of heroin in a truck at the Serbian-Bulgarian border, one of the country’s largest-ever heroin busts, according to the country’s Interior Minister Nebojsa Stefanovic.
He said that two Serbian citizens were arrested during an operation that was staged near the Serbian town of Dimitrovgrad.
“Police arrested two Serbian citizens from the city of Novi Pazar. They are suspected of being part of a criminal group involved in trafficking drugs from Turkey through Bulgaria to Serbia,” Stefanovic said.
He added that the case will be handed to prosecutors dealing with organized crime and that the heroin that was seized is exceptionally pure in quality.

#Daesh, aka #ISIS, has nothing to do with Islam and everything to do w/organized crime – funded by paid ransoms & drug trafficking #OpParis

Stefanovic recalled that Serbian police have more than once detained major consignments of opiates in Serbia over the past eighteen months.
According to the US State Department’s International Narcotics Strategy Report for 2015, Turkey is a major trade center for heroin, cannabis, methamphetamine and cocaine. Currently, Serbia remains one of the key transit countries for drugs being smuggled from the Middle East to Western Europe.
In a recent interview with RT, Abayomi Azikiwe, editor of the Pan-African News Wire, attributed ever-increasing drug smuggling activity to the fact that Russian warplanes have repeatedly attacked refineries and tanker trucks controlled by Daesh.
According to Azikiwe, these attacks have significantly reduced the revenues of the jihadist group.
Earlier, the Russian Federal Drug Control Service said that Daesh receives about one billion dollars from the transit of drugs through its territory.
http://sputniknews.com/world/20151208/1031400894/serbia-police-heroin-daesh.html