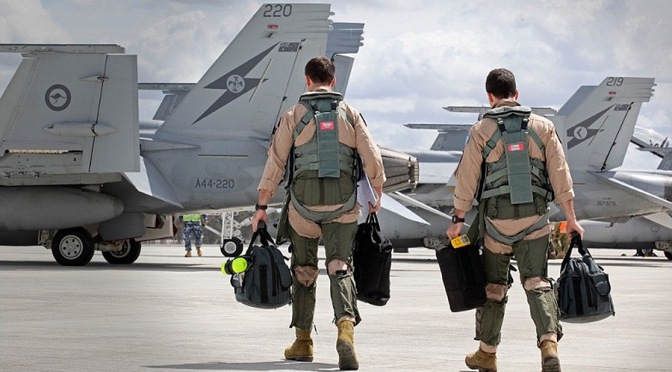 Yesterday, Russia issued a stern warning that it will target any uninvited military overflight in Syrian airspace after the ISIS Air Force shot down one Syrian fighter jet that was conducting legitimate operations in Raqqa, without due respect to the US-Russia deconfliction agreement.

In response, Australia is suspending its participation in the US-led invasion of Syria.

PressTV | Tue Jun 20, 2017 9:18AM
Australia has suspended its cooperation with a United States-led coalition in Syria out of apparent concern that the US’s recent downing of a Syrian fighter jet may escalate the situation in the Arab country to its disadvantage.
“As a precautionary measure, Australian Defence Force (ADF) strike operations into Syria have temporarily ceased,” an ADF spokeswoman said in a statement on Tuesday.
No reason was given for the suspension, but The Australian newspaper said it was implemented as a precaution after the Syrian jet’s downing.
“ADF personnel are closely monitoring the air situation in Syria and a decision on the resumption of ADF air operations in Syria will be made in due course,” the spokeswoman added.
There are six Australian aircraft serving with the coalition, which has been leading dozens of US allies in Syria since 2014 in a declared mission to hit Daesh.
On Sunday, a US warplane hit a Syrian Su-22 with a missile.
The US claimed that it had targeted the plane “in collective self-defense of coalition-partnered forces” in Syria’s Tabqa.

The pilot of the targeted plane, however, survived the incident by parachuting out of his aircraft in time.
A day later, the Defense Ministry in Russia, an ally of Damascus, threatened to treat coalition aircraft potentially flying in areas west of the Euphrates River, which are controlled by Russia “as air targets.” Russia has been conducting an aerial bombardment campaign against terrorist positions in Syria on a request by Damascus.
The Pentagon responded by saying,

“We will not hesitate to defend ourselves or our partners if threatened.”

Moscow also suspended a hotline intended to avoid aerial collisions.
That escalation of tensions between the US and Russia seems to be the reason why Australia has temporarily backed off of aerial missions over Syria.
The US struck a Syrian airfield hosting Russian forces back in April. While Washington had given Moscow an advance notice of the strike, Moscow was angered, saying that the offensive had moved the two sides within inches of direct conflict.

Coalition aircraft have, time and again, stricken civilian targets in Syria, as well.
On Tuesday, the official Syrian Arab News Agency reported that on Monday night, coalition warplanes had hit Tal al-Shair District in the northeastern province of al-Hasakah, killing 12 members of one family.
Hasakah borders Iraq. The US strike came as the Syrian troops are closing in on Takfiri targets near the common border.

In a separate development, it was reported that the Syrian air force had resumed its strikes against terrorist positions close to the southwestern city of Dara’a.
The Syrian military had announced a two-day ceasefire in the city in support of national reconciliation efforts meant to secure civilian lives and give an opportunity to foreign-sponsored militants to lay down their arms.

It must be remembered that the ISIS Air Force, mistakenly branded as the US Air Force, was also involved in the slaughter of more than 100 Syrian soldiers, when the coalition forces “accidentally” raided the Syrian military airport in Deir Ez Zour province, back August 2016.
Days prior to the latest US airstrike on a Syrian asset,  the US has deployed HIMARS long-range rocket launchers from Jordan to its base in At Tanf in Syria, that the Russians suspect is aimed at Syrians, and not against the terrorists.
https://www.youtube.com/watch?v=7gjE3-v1oHM