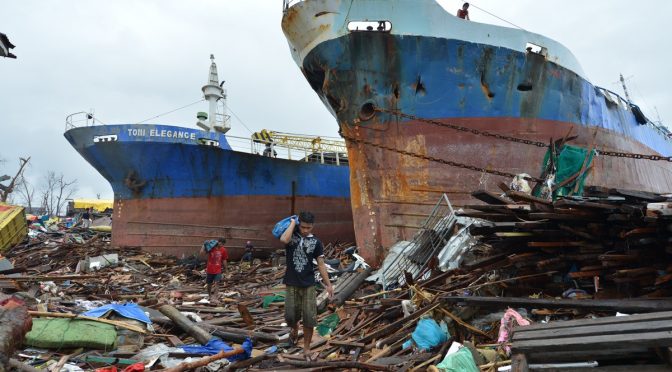 Every time there’s a forecasted major calamity for my country, US aircraft carrier fleet is surreptitiously nearby. It was the scene back in 2006 during the Guinsaugon landslide; it’s the same during Cat 5 Typhoon Haiyan [Yolanda] last year.
Now, another deadly typhoon is being deliberately steered into this country which will make a landfall on Saturday [December 5]; same strength [Cat 5] and same path, i.e. Central Visayas, where we are actually based on. Updated tracking is available below.

WEATHER.COM.PH TROPICAL CYCLONE UPDATES
TYPHOON HAGUPIT (RUBY) UPDATE NUMBER 014
Issued at: 7:15 PM PhT (11:15 GMT) Saturday 06 December 2014
Next Update: Sunday Early Morning, 07 December 2014 Typhoon HAGUPIT (RUBY) continues losing strength as it drifts westward, closer to Eastern and Northern Samar. The potential landfall area of this cyclone is over or very near the towns of Oras and Arteche in Eastern Samar, between 8PM-12MN tonight.
This typhoon will continue to enhance the Northeast Monsoon (Hanging Amihan) – bringing mostly cloudy and windy conditions and cooler temperatures across Northern and Central Luzon…becoming more frequent with possible occasional slight to moderate rains along eastern sections of Cagayan, Isabela, Aurora, and Northern Quezon. The threat of flash floods and landslides are likely in hazard-prone areas especially along river banks and mountain slopes of the affected areas. Residents are advised to take necessary precautions.

As had happened every aftermath of any disaster, all donations channeled through the Red Cross will be pocketed for the glory of the Church; only a trickle will go down to the intended beneficiaries. After all, the Red Cross is a huge scam. This had been our experience during the Guinsaugon Landslide when approximately Php 2 Billion [$45 million] where collected which would have made the local town into a mini city, yet that’s not the case.
The Vatican has no gold mine of its own, but it is claiming ownership on at least 85% of the planet’s gold bullion according to a CIA leak. It’s not hard to understand that these hoards was obtained through wars and plunder from past and present Crusades.
They used to be Templar Knights of the Medieval Period but have  since rebranded themselves as the Jesuits. Philippines is one of those Vatican provincials under the full control of the Jesuits.

“Many of us Filipino knows already as a fact that the Jesuits are not only a religious order in the RCC but also a military order to counter Protestantism. In the Philippines the protestant churches had been already infiltrated by these people and was deceived to embrace the false Gospel of Romanism through their Ecumenical Movement. However many doesn’t know that the government is also controlled by these people that their religion may continue deceiving many in the country. These people are well known for their demonic tactics not only to infiltrate those who expose and bring to light their false beliefs and practice.. but we know their ways are also very corrupt and of the devil. The below post will somehow reveal truth about Noynoy’s coming into power… who are the people behind him.. his supporters and backers.” Read more 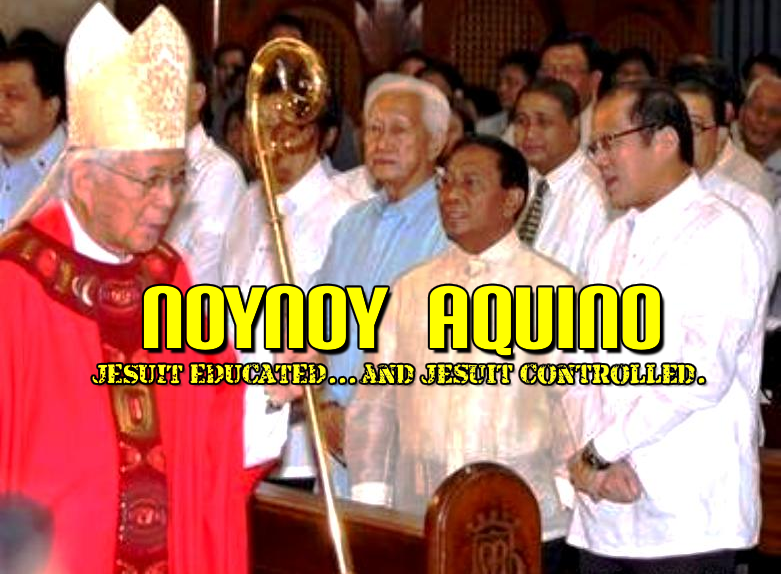 Another strong motivation for the Vatican to secure its own gold reserves is the ongoing international move via BRICS+188 to dump the petrodollar in favor of hard currencies like gold. This is to disable the warmongers of Western countries responsible for the destruction of Libya, Iraq, Afghanistan and Syria.
Countries dumping the fiat US dollars are listed here.
The Philippines is home to a vast collection of these bullion, foreign and domestic. By sheer “coincidence”, the Jesuit Pope is coming to this country in January 2015, yes, after the HAARPing is done.
The infallible Pope’s visit is hyperhyped too, just like the devastation tomorrow. As expected, his visit will be about helping last year’s typhoon victims.
But what if the real intention is direct extortion to keep the organization afloat?
Already, there’s an advanced PR narrative to cover its future track, like so:

Vatican reformers have discovered hundreds of millions of euros that did not appear on the Holy See’s balance sheet, the cardinal charged with sorting out the Curia’s financial affairs has said. more »
How convenient.
To put icing on their globalists cake, they would make vaccinations mandatory, too, for the typhoon victims to “protect them from possible epidemic.”
We are saying these things now because it may take a month for the internet services and power to be restored.
[youtube=https://www.youtube.com/watch?v=0IgdzyMNfjw]

It’s the acronym for High Frequency Active Auroral Research Program, and it’s beyond experimental at this point in time. The technology is more than a hundred years old courtesy of Dr. Nikola Tesla who intended to use this technology for turning the deserts of Africa and Middle East green, and for averting future wars.
What are the basic components of HAARP?

Sending microwave signals into the atmosphere heats it up, and creates higher pressure. The longer the exposure, or the higher the energy being used, the higher the temperature will be.
How does HAARP works?
HAARP heats up a specific portion of the atmosphere , i.e. on top of the target area, to create high pressure. High pressure gases travel into low pressure areas [LPAs].
LPA is where typhoons or cyclones will occur.
Multiple triangulated HAARP stations make typhoons steerable to any target of interest.


Advertised as a radar for defensive purposes, the Sea-Based X-Band Radar (SBX-1) is a floating, self-propelled, mobile active electronically scanned array radar station designed to operate as HAARP for offensive purposes.
This is not the second time we were HAARPed. There are at least three incidents in the past when thousands died of these obviously manmade disasters, e.g. Cotabato Tsunami 1970s, Ormoc Flashflood 1991, North Luzon Flashflood 2009. Except for Cotabato, these flashfloods were preceded by days of heavier than normal rainfalls.

On August 16, 1976, a devastating earthquake on the Cotabato Trench caused destruction on the island of Mindanao – the southernmost and largest of the Phillipine Islands.
The destructive tsunami that was generated in the Gulf of Moro and in the Celebes Sea killed about 8,000 people in coastal communities in North and South Zamboanga, North and South Lanao, North Cotabato, Maguindanao and Sultan Kudarat (Mindanao), and in the neighboring Sulu Islands.
This was the worst earthquake and tsunami disaster in the history of the Phillilines. Also, the Indonesian Hydrographic Office reported that unusual wave activity affected the islands of Sulawesi (Celebes Island) and Borneo.

Warning: This section includes very graphic images…
On the morning of 5 November 1991, the Ormoc region was inundated by Tropical Storm Uring. The city government recorded 4,922 deaths, 3,000 missing persons, 14,000 destroyed houses and more than P600 million worth of damaged property.[5] None of the 3,000 missing persons were ever found and are now presumed dead.[6]

Typhoon Ketsana, known in the Philippines as Tropical Storm Ondoy, was the second most devastating tropical cyclone in the 2009 Pacific typhoon season with a damage of $1.09 billion and 747 fatalities, only behind Morakot earlier in the season, which caused 789 deaths and damages worth $6.2 billion. The storm was the sixteenth tropical storm, eighth typhoon and the second major typhoon in the season. It was the most devastating typhoon to hit Manila,[1] surpassing Typhoon Patsy (Yoling) in 1970.

Warning: This section includes very graphic images…
Typhoon Haiyan, known in the Philippines as Typhoon Yolanda, was one of the strongest tropical cyclones ever recorded; causing monumental destruction in portions of Southeast Asia, particularly the Philippines, in early-November 2013.[1] It is the deadliest Philippine typhoon on record,[2] killing at least 6,300 people in that country alone.[3] Haiyan is also the strongest storm recorded at landfall, and the strongest typhoon ever recorded in terms of one-minute sustained wind speed.[4][5] As of January 2014, bodies were still being found.[6] 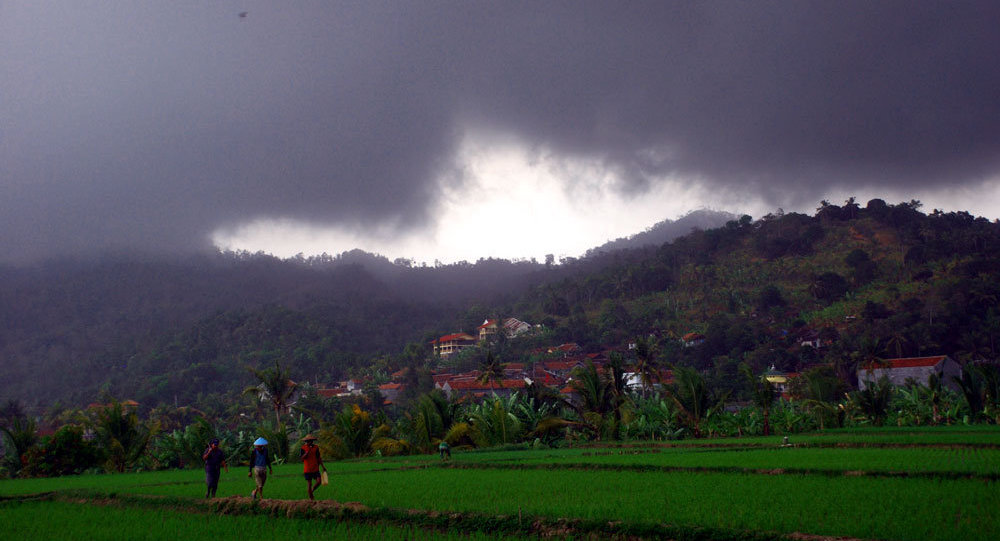 Philippines authorities said that over 616,000 people have been evacuated from the areas likely to be affected by the typhoon Ruby, roaring toward the country.

MOSCOW, December 6 (Sputnik) — Authorities of the Philippines have evacuated over 616,000 people from the areas likely to be affected by the typhoon Ruby, roaring toward the country, authorities said in a Saturday press release.
According to the data provided by the National Disaster Risk Reduction and Management Council (NDRRMC), the typhoon continues to threaten the island state’s eastern Samar Provinces, while maintaining its course.
The NDRRMC expects the typhoon to bring strong winds, heavy rain and up to 14 feet-storm surge to the Eastern Samar province by Sunday morning.
The approaching typhoon has so far resulted in the cancellation of 88 flights, according to the agency.
The Philippines is routinely affected by typhoons during the monsoon rains period from June to December. Typhoon Haiyan, that struck the country along with Micronesia, southern China and Vietnam in November 2013, caused over 6,300 deaths, thousands of injuries, and demolished infrastructure. The damage stretched over many thousands of miles, affecting about 14 million people.
source »

2 thoughts on “Luciferians Playing Haarp On Us Again 2.0”