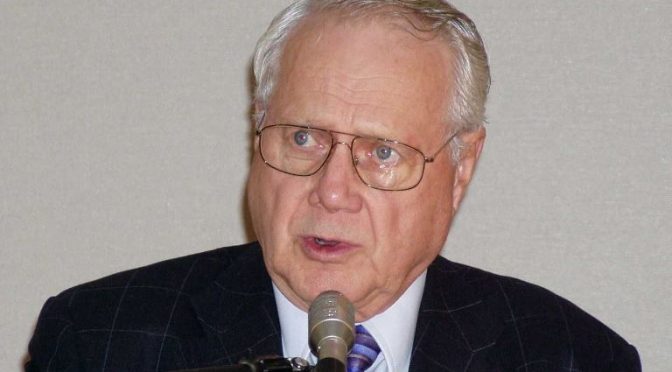 [youtube https://www.youtube.com/watch?v=tZz8sA4DJ60?version=3&rel=1&fs=1&showsearch=0&showinfo=1&iv_load_policy=1&wmode=transparent]
Theodore L. Gunderson (November 7, 1928 – July 31, 2011)
Ted Gunderson was born in Colorado Springs. He graduated from the University of Nebraska in 1950. Gunderson joined the Federal Bureau of Investigation in December 1951 under J. Edgar Hoover. He served in the Mobile, Knoxville, New York City, and Albuquerque offices. He held posts as an Assistant Special Agent-in-Charge in New Haven and Philadelphia. In 1973 he became the head of the Memphis FBI and then the head of the Dallas FBI in 1975. Ted Gunderson was appointed the head of the Los Angeles FBI in 1977. In 1979 he was one of a handful interviewed for the job of FBI director, which ultimately went to William H. Webster.

After retiring from the FBI, Gunderson set up a private investigation firm, Ted L. Gunderson and Associates, in Santa Monica. In 1980, he became a defense investigator for Green Beret Doctor Jeffrey R. MacDonald, who had been convicted of the 1970 murders of his pregnant wife and two daughters. Gunderson obtained affidavits from Helena Stoeckley confessing to her involvement in the murders.
He also investigated a child molestation trial in Manhattan Beach California. In a 1995 conference in Dallas, Gunderson warned about the proliferation of secret Satanic groups, and the danger posed by the New World Order, a shadow government that would be controlling the US government. He also disclosed that a “slave auction” in which children were sold to men in turbans had been held in Las Vegas, that four thousand ritual human sacrifices are performed in New York City every year, and that the 1995 bombing of the Alfred P. Murrah Federal Building in Oklahoma City was carried out by the US government. Gunderson believed that in the US there is a secret widespread network of groups who kidnap children and infants, and subject them to Satanic ritual abuse and subsequent human sacrifice.
Gunderson had an association with Anthony J. Hilder. Hilder was interviewed by him on various occasions, and the two men appeared at numerous conferences together. They both said that the 1993 World Trade Center Bombing was a result of FBI agent provocateurs.
Gunderson was a member of the Constitution Party.
source »

Ted Gunderson’s last talk at the Granada Forum on November 11, 2010
https://www.youtube.com/watch?v=xMQifcCb2M8
In November of 1999, I acquired an enormous amount of paperwork from retired FBI Senior Special-Agent-In-Charge Ted L. Gunderson who had compiled box loads of research and had assembled a number of reports in recent years which described unimaginable “operations” of treachery, sadistic savagery, degradation, abuse, and murder caused by intelligence agents of the United States government against its own citizens, especially children.

The kidnapping of children for purposes of prostitution, pornography, high tech weaponry experimental abuse, mind control abuse, child slave labor for underground alien-controlled facilities, white sex slavery, and the satanic ritual murder of untold thousands of American children snatched from the streets and playgrounds of America by agents working for the CIA is the principle reason for the existence of a covert CIA operation called “The Finders“. The Finders is one of the most alarming and despicable covert operations against America’s children that Gunderson’s investigations helped to uncover, but it’s only one of many covert Gestapo-like acts committed against American citizens by government agents under directives issued, not by Congress or the President, but rather by international satanists collectively known as the Illuminati, who control the Secret or Inner government of the United States as well as every other major government in the world. The “Finders” operation began in the 1960’s and continues kidnapping children to this very day.

Soon after after retiring from the FBI in March of 1979 , Ted began looking more deeply into cases of satanic murder activity after becoming convinced of the innocence of a young Army medical doctor, Dr. Jeffrey R. MacDonald, who was falsely convicted in August, 1979 of the murder of his wife and two young daughters (5 year old Kimberly, and 2 year old Kristen MacDonald) in a bloody and grisly satanic style murder scene that took place in their home in the early morning hours of Feb. 17, 1970 on Ft. Bragg Army base in North Carolina. The murders were in fact committed by a local satanic group of drug users (referred to as “hippies” in the newspapers at the time) which included five active duty army men who had targeted the MacDonald family because Dr. MacDonald was perceived by this group of GI drug users as a “snitch”; as MacDonald and other army doctors were adhering to the base commander’s new policy (at the time) of reporting the names of Army personnel who were being admitted to the base Emergency Room for overdosing on heroin and other serious drugs .
What happened next to Jeffrey MacDonald is nothing short of the greatest case of malicious prosecution and injustice in modern history.

The participation of persons of high position in satanic rituals and child prostitution in the Omaha, Nebraska was revealed in the 1992 book, The Franklin Cover-Up, by former state senator and attorney, John DeCamp. Ted Gunderson provided a substantial amount of investigative assistance to John DeCamp in uncovering the story. The Franklin Cover-Up describes the role played by the CIA’s “Finders” in the drugging,  mind control, and forced coercion of kidnapped children into silent compliance to serve the pedophilic and sadistic appetites of some of the most prominent and well known people in Omaha, Nebraska and Washington, DC.
Conspiracy of Silence was a one hour video describing the Franklin Cover-Up originallly due to be aired on the Discovery Channel in 1994. The documentary was pulled and the UK producers paid off to obtain all copies by unknown political figures in congress. John DeCamp had obtained an in-house copy which he gave to Ted Gunderson in the late 1990s. which Ted made available from his web site and at his talks. The Conspiracy of Silence is the greatest testament to the victory of corruption and murder over innocence and justice ever seen in a modern times. This version was posted to Youtube on May 1, 2012. Paul Bonner was killed with a drug overdose shortly after being filmed for this documentary.
[youtube https://www.youtube.com/watch?v=vBSIDQt5Dwc]
John DeCamp, Alex Jones Interview – The Franklin Cover Up (Youtube Posted Jan. 5, 2012; recorded prior to Ted Gunderson’s passing in July 2011)

Ted played a formidable role in the exposure of the satanic/sexual cover-up in the McMartin Preschool case (Manhattan Beach, California) which had involved over 450 children in the 3-5 year old range over a period of years. The story occupied national headlines for most of the 1980’s and, once again, prosecutors were anxious to sabotage the investigation to conceal the identity of powerful and well connected pedophiles who were abusing these kids at off site locations and had them returned to the school before the parents arrived to pick up their children. The CIA created a front group called The False Memory Syndrome Foundation (FMSF) to debunk, reticule, and defame victims (and their advocates) of Satanic Ritual Abuse, pedophilic sexual abuse, and CIA cult mind control activities. The board members of FMSF reads like a Who’s Who of CIA contractors and ‘consultants’. Incredibly, Peter and Pamela Freyd , executive directors of the FMSF along with FMSF founder, Dr. Ralph Underwager, have fallen from public grace because they, themselves, have been involved in the very abuse that they claim is a result of ‘false’ memory’ on the part of very young children. Additional articles about the McMartin Preschool case are posted near the bottom of this page.

These stories and others that Ted has investigated will be covered here, but for the time being, however, I’ll need to devote my time to expounding on another covert CIA “operation”: the smearing of Ted Gunderson’s name & reputation by using a national radio talk show host named Art Bell.
Since much of Ted’s research and talks have centered on CIA involved operations (including the Oklahoma City Bombing), the CIA is likely a little upset with Ted and probably would like to see him permanently retired, but Ted apparently has friends in “high places” too, since, to date, he’s managed to thwart six attempts on his life.
So, if  Ted won’t lay down in the ‘usual’ manner, how does his Langley pals get the public to ignore what he has to say?
Simple. They kick in their standard Plan B takedown operation: Smear and Discredit.
It works like this: reduce your critic to an unbelievable, disreputable, irresponsible ‘conspiracy nut’ who no one much likes anyway because you keep “hearing” bad things about him.
So, how do they go about doing that?
Well, they set up a “scenario” and then use chumps to play the parts. It’s sort of like making a movie. First you get the script writers in one of those fancy Langley offices to lay out the Plot and the Players. Then you gather your cast, except the cast members usually don’t recognize that they’re part of a cast because most of them are getting their lines (instructions) delivered straight into their subconscious mind via a little technique called mind control, having already been prepped for the job earlier in life with either trauma-based conditioning programs (satanic ritual abuse (SRA) being a common vehicle) or with the newer all-electronic mind control methods employing Montauk Project style conditioning (covert Montauk ‘training centers’ are presently established in most major cities throughout North America-according to Al Bielek), and finally raise the curtain on Act One, Scene One. The ‘stage’ in this case is the American landscape with Lighting, Sound, and Special Effects provided by mainstream media and CIA/NSA/FBI orchestrators.
In Ted’s case, Act One opened on April 1, 2000, which is also known as April Fool’s Day (those clever rascals! Is this poetry or what!). On that date, Art Bell announced to his millions of radio listeners (including me) that he was leaving radio for good at the end of the April because his life had been “devastated” by the deplorable conduct of one Ted Gunderson and David Hinkson. You can read my first reaction to Scene One in The Smearing of Ted Gunderson, Part 1 that’s posted below.
Since then, Ted’s Play has been moving  right along. New characters have been introduced and the Plot has taken a few surprising turns; web sites have been created to Dump on Gunderson; articles have appeared in national magazines like People’s; affidavits have been submitted to the Tennessee court, and newspaper stories abound.
All in all, it’s quite a production, but you’ll be able to read all the juicy behind-the-scenes news right here as we review this production in its entirety, analyzing the plot, the producers, the promoters, and the actors…especially the bit players with names like Robert Ghostwolf.     (Posted August, 2000)
Update: August 2007
You can now view an online video in which Ted Gunderson tells his side of the Art Bell lawsuit in a talk given at the Global Science Congress, Denver Colorado in August 2001:
The Story of the Art Bell Lawsuit – Ted Gunderson – Full film
[youtube https://www.youtube.com/watch?v=Ak9dMGxNNtw?list=PLo_ZMW61DwBLXpxvVqKnpnADt5uvJ5mOa]