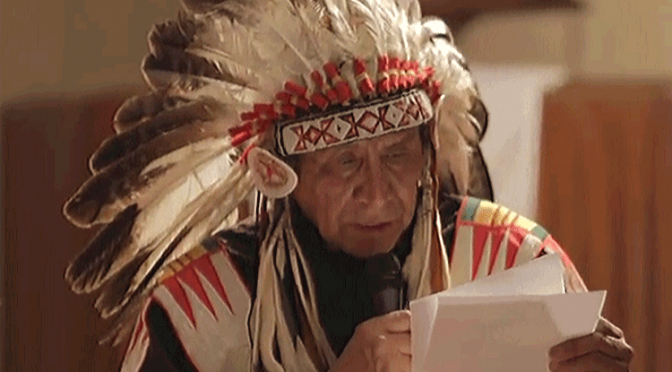 The much sidelined and much older civilization on this planet are sharing their profound understanding about what these things are all about, especially during this time of so much social torment and unfettered environmental devastation.


In late September, Indigenous Elders and Medicine People of North and South America united for four days in sacred ceremony in Green Grass, South Dakota. The significance of this meeting is profound. Its outcome is the Statement which Chief Looking Horse delivers in his native Lakota language, at the United Nations Tillman Chapel. It is the embodiment of a confluence of prophecies which speak to the necessity to activate a new level of consciousness for the benefit of humanity and the earth. Although their statement illuminates the nuclear crisis at Fukushima, the fundamental message is for humanity to spiritually awaken to protect and restore the sacred.”
“We are part of Creation, thus, if we break the laws of Creation we destroy ourselves. We, the Original Caretakers of Mother Earth, have no choice but to follow and uphold the Original Instructions, which sustains the continuity of Life. We recognize our umbilical connection to Mother Earth and understand that she is the source of life, not a resource to be exploited. We speak on behalf of all Creation today, to communicate an urgent message that man has gone too far, placing us in the state of survival. We warned that one day you would not be able to control what you have created. That day is here. Not heeding warnings from both Nature and the People of the Earth keeps us on the path of self destruction. This self destructive path has led to the Fukushima nuclear crisis, Gulf oil spill, tar sands devastation, pipeline failures, impacts of carbon dioxide emissions and the destruction of ground water through hydraulic fracking, just to name a few. In addition, these activities and development continue to cause the deterioration and destruction of sacred places and sacred waters that are vital for Life.” – Chief Looking Horse
This is an invitation to step into service, to choose to join a collective body of humans that deeply cares about our planet. Please read the Indigenous elders statement here: http://caretakersofmotherearth.com/
“Luther Standing bear was an Oglala Lakota Sioux Chief who lived before and during the arrival of European pioneers, at a time when, arguably, the greatest genocide in human history was taking place. You can read more about that here. He was born as ‘Ota Kte’ in the Pine Ridge Reservation in South Dakota, and was one of the first students to attend the Carlisle Indian School of Pennsylvania. After that, he toured with the Buffalo Bill Wild West Show, entered into the world of acting in California, and spent his life fighting to improve conditions for Indians on American reservations. He wrote several books about Indian life life and governmental policy.