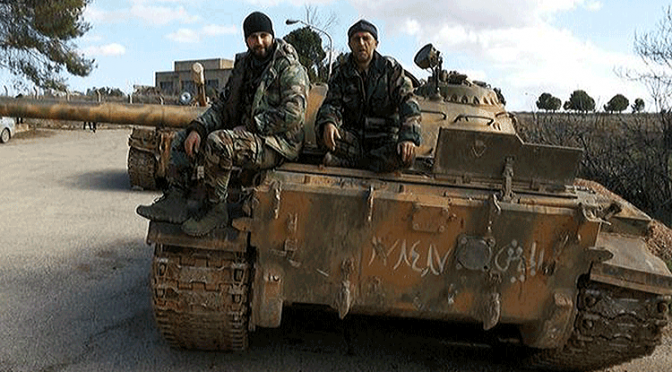 The Syrian forces, backed by Russian Aviation forces and other allies, are now moving closer from at least 3 different directions into Daesh Islamic State advertised capital city of Raqqa.
This development is an emergency situation for the terrorists’ sponsors, e.g. Turkey, Saudi Arabia and the rogue elements in the United States government.

Would they allow the Russians to rout the “moderate oppositions” in Aleppo and soon Raqqa,  and declare themselves and their allies, as the savior of Syria from Daesh terror?
Certainly not.
Over the last few days, Turkey had set up camps near the border but inside Syria, housing Arab civilians escaping from war-torn Aleppo, and run by NGOs and private Turkish companies.
The aim of setting up the camps, as we understand it, is three-fold:

These camps could also be used later on to disguise hard core terrorists as refugees when Aleppo is finally recovered by Syrian forces now on the ground.

The establishment of such camps, the sending of Saudi warplanes into Turkey in preparation for injecting ground troops in Syria, particularly in the direction of Raqqa, where the US could then announce to the whole world as being the ones who defeated the Daesh Islamic State, thereby usurping the limelight from the Russians, would be their endgame in Syria.
After all, the United States, and NATO at large, have already shown us repeatedly their penchant for false propaganda. How many times in the recent past have the Western mass media been caught using Russian airstrike videos and claiming as their own?

They were also caught trying to sabotage Russian-led operations at the perimeter of Aleppo.

Certainly, their plan to capture for themselves the Syrian City of Raqqa would definitely serve the same and very significant purpose, i.e. it would provide a neat conclusion to their “We are the heroes in Syria” false narrative.
There is, therefore, a great need for the Russians to raise the ante and upgrade their strategy and that of other special forces even more, on top of the S-400 missile defense system and a number of T-90As armored tanks already on the ground in Syria.
It is due to this critical situation in Syria that Russian Prime Minister Dmitry Medvedev delivered his stern warning, a day ago in Munich, that the West, unless they are sure to win it quickly, should be very careful in putting boots on the ground, at this very late hour in the game, that would lead to a “permanent war” and a “Third World Shake-up”, both are obviously mere euphemisms for open World War 3 primarily with the Russians.

When that happens, Iran, India and China will be out in full force alongside the Russians, and that would be a scenario that no chickenhawks in Washington would ever dare to entertain, cowards they all are.
These warmongers are now evidently reduced to propaganda warfare as their capacity to launch another false flag attack is greatly diminished.
So far, Russia has never taken the bait of a ceasefire, through the Geneva conference last month, which should have given the terrorists their much needed  opportunity to regroup and rearm, and the Syrian / Kurdish forces are now in the process of encircling Aleppo, the largest city adjacent and west of Raqqa, while the White House can’t seem to make up its own mind.
We can only imagine the dire situation the civilians inside Raqqa and other cities have been experiencing while serving as human shields for the terrorists. It is the presence of civilians within Dash-controlled  territories which made the whole operation painstakingly slow.
In any case, we are now seeing the final battle for Syrian sovereignty. The race for Raqqa is on.

“TEHRAN (FNA)- The Syrian army and popular forces continued their advances in Raqqa province from three different directions along the strategic road of Asriya.

Scores of terrorists were killed and injured in fierce clashes with the government troops.

In a relevant development earlier today, the Syrian Army and the National Defense Forces (NDF), backed up by the Russian and Syrian fighter jets, drove the ISIL militants back from several strategic heights in Raqqa province.”

Leith Fadel
Over the last 3 days, the Syrian Arab Army’s 555th Brigade of the 4th Mechanized Division – backed by Liwaa Suqour Al-Sahra (Desert Hawks Brigade), Fouj Al-Joulan (Golani Regiment), the National Defense Forces (NDF), and the pro-government Palestinian militia “Liwaa Al-Quds” (Jerusalem Brigade) – have made several advances in the eastern Hama countryside, as they continue to push northeast towards the strategic Tabaqa Military Airport in the Al-Raqqa Governorate.
Late last night, the Syrian Arab Army’s 555th Brigade carried out a successful military operation to cutoff the Islamic State of Iraq and Al-Sham (ISIS) at the Zakiyah crossroad that leads into the Hama Governorate’s eastern countryside.
This successful military operation was carried out by the government forces after they reached the village of Zakiyah on Friday afternoon.
With the Zakiyah crossroad under their control in southern Al-Raqqa, the Syrian Armed Forces have successfully sealed off the Salamiyah-Raqqa Highway in the Hama Governorate.
More importantly, the imperative town of Ithriyah is no longer threatened by the ISIS terrorists that wreaked havoc on the Syrian government’s only supply route to the Aleppo Governorate along the Khanasser-Ithriyah Road.
Currently, the Syrian Armed Forces are approximately 35 km away from the Tabaqa Military Airport – the capture of this site is their primary objective in Al-Raqqa at the moment.
http://www.almasdarnews.com/article/syrian-army-reaches-important-crossroad-in-southern-raqqa/
From Reuters,

“Russia said on Saturday a Syria ceasefire plan was more likely to fail than succeed, as Syrian government forces backed by Russian air strikes took rebel ground near Aleppo and set their sights on the Islamic State stronghold of Raqqa province.

International divisions over Syria surfaced anew at a Munich conference where Russia rejected French charges that it was bombing civilians, just a day after world powers agreed on the “cessation of hostilities” due to begin in a week’s time.

U.S. Secretary of State John Kerry reiterated accusations that Russia was hitting “legitimate opposition groups” and civilians with its bombing campaign in Syria and said Moscow must change its targets to respect the ceasefire deal.

The conflict, reshaped by Russia’s intervention last September, has gone into an even higher gear since the United Nations sought to revive peace talks. These were suspended earlier this month in Geneva before they got off the ground.

The United States urged both Turkey and the Syrian Kurds to step back and focus instead on tackling the “common threat” of Islamic State militants who control large parts of Syria.

The Syrian army looked poised to advance into the Islamic State-held province of Raqqa for the first time since 2014, apparently to pre-empt any move by Saudi Arabia to send ground forces into Syria to fight the jihadist insurgents.

A Syrian military source said the army captured positions at the provincial border between Hama and Raqqa in the last two days and intends to advance further.”

“TEHRAN (FNA)- Iraqi volunteer forces (Hashd al-Shaabi) in a statement warned Saudi Arabia not to even think about dispatching military forces to Iraq.

The warning came after some Arab media reported that Saudi Arabia and its allies are planning to conduct a joint military maneuver near Iraq’s Western borders.

“We will turn Iraq into graveyard for Saudi forces if they dare to attack Iraq,” the Arabic-language media outlets quoted Iraqi Volunteer Forces Spokesman Ahmad al-Assadi as saying on Saturday.

“We warn Saudi Arabia and any other country that dreams of making an aggression against Iraq that if they get near the Iraqi soil, the volunteer forces will stand up to them,” the statement added.”