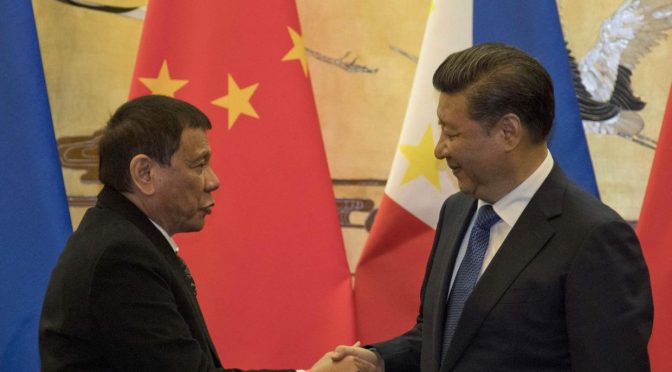 “I announce my separation from the United States, both militarily and economically,” said Duterte, in front of the Chinese Vice Premier Zhang Gaoli, and hundreds of Chinese and Filipino businessmen who were gathered during the Philippines-China Trade and Investment Forum in Beijing.

https://www.youtube.com/watch?v=8kewxFaNifs
Said gathering was preceded by the signing of 13 Memorandum of Agreements in areas of trade cooperation, infrastructure developments, combating illegal drugs, fisheries and tourism. After which, the two leaders talked behind closed doors for 30 more minutes, said to be a rare occurrence with China’s leader Xi Jinping.

In a statement, the foreign ministry cited Xi as telling Duterte their emotional foundation of friendly good neighborliness was unchanged, and difficult topics of discussion “could be shelved temporarily.”

Duterte’s visit to Beijing capped a series of recent declarations blasting the US and President Barack Obama.

Addressing the Filipino community in Beijing Wednesday, the firebrand leader said the Philippines had gained little from its long alliance with the US, its former colonial ruler.

“Your stay in my country was for your own benefit. So time to say goodbye, my friend,” he said, as if addressing the US.

“The economy of the Philippines during the insurgency of the First Philippine Republic remained the same throughout its early years but was halted due to the break out of the Philippine–American War. Nevertheless, during the era of the First Republic, the estimated GDP per capita for the Philippines in 1900 was of $1,033.00. That made it the second richest place in all of Asia, just a little behind Japan ($1,135.00), and far ahead of China ($652.00) or India ($625.00).[36]
… When the Great Depression happened in the United States, the Philippines on the other hand wasn’t affected. Instead, the US relied on the Philippine economy throughout the depression era.”
https://en.wikipedia.org/wiki/Economy_of_the_Philippines
https://youtu.be/pJ9iIkAbCsY
This is the boldest move so far for the Philippine president, and for the country that has a majority of its population reeling from abject poverty due to the failed “trickle down” economics, massive privatization of public utilities, and the widespread corruptions both in government and private institutions, forcing its people to leave their loved ones behind and work abroad, only to return with their kids hooked in methamphetamine addiction.
Obviously, the social costs cannot be factored into the economist’s GDP calculation, which make the purported economic growth figures illusory.
Now, the people of the Philippines can afford to have hope again for a brighter future.
https://www.youtube.com/watch?v=nagJ8HHklZE
Earlier, Duterte was also selected by his peers in the ASEAN to lead the community from hereon. During that same forum, Duterte also disclosed his plans to ask Russia that the three countries joined together against the Old World Order.
It must be understood that the two countries have been engaging peacefully for thousands of years primarily through commerce during the times of the Datus, Lakans and the Kingdom of Maharlika. Never did the Chinese attempted to sow terror in these islands which became the melting pot among neighboring territories.
Now, the revival of the ancient Silk Road can expand in earnest in this part of the Pacific.
All major changes, of course, need some adjustments.
Yesterday, one leftist group attempted to storm the US embassy, and kick out the Americans just like the Iranians did in the late 1970s. Fortunately, the Manila police are more loyal to the US government for whatever reason, they are more than willing to kill some of their own.
https://www.youtube.com/watch?v=xfY3fU4uF4U
Sixty police personnel are already relieved from their posts, and are undergoing multiple debriefings.
For the CIA Stratfor, it failed to predict what’s going to happen today.

Still, while Manila is diversifying diplomatic ties and calibrating its security reliance on the United States, it clearly understands any transition away from U.S. dependence will not be easy or quick. Replacing the U.S. surveillance capabilities in Mindanao alone would likely take years. And any moves to supplant U.S. military aid will not happen until the Philippines can enlist help from other nations, such as Japan, Russia or China, although, as Foreign Minister Perfecto Yasay reiterated, Manila has no intention to form a military alliance with China or Russia.

Now, even China wasn’t expecting this announcement either. So, bear with it.
As far as we are concerned, we have grown used to the occasional HAARPing. In fact, a lot of the people are already aware of what’s really going on with the weather.

2 thoughts on “Time to say goodbye, my friend | Duterte”