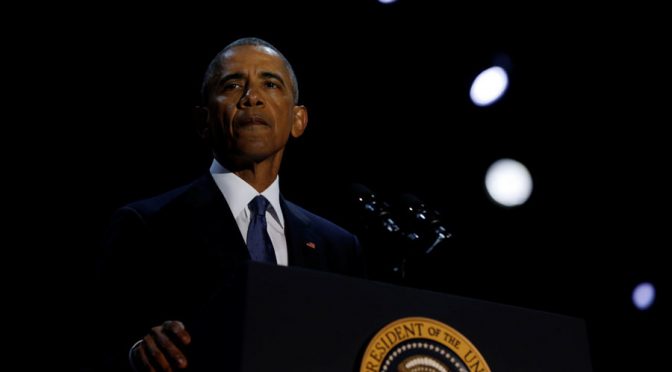 As predicted by multiple political observers, the Obama administration turns out to be a continuation of the Bush Jr’s regime, which saw the rise of invasive surveillance, US national debt and US unemployment, continued funding of CIA terror operations in Syria, and establishment of drone bases in Africa, among many other highly destructive measures.

He also allowed the murder of Muammar Qaddafi and the subsequent plunder of the wealth of Libya, followed by the human sacrifice of Ambassador Stevens, presided the bogus raid against Bin Laden who died years earlier in a US military base hospital due to kidney failure. All of these are in addition to multiple attempts at starting a nuclear war with Russia and China.
Yes, he oversaw the signing of the Iranian nuclear deal, but only after being cornered geopolitically and militarily by Russia in the Middle East region, and in the UN Security Council, with the cooperation of the Chinese delegation and other allies.
The surgical drone attacks against civilian targets remain a subject of full cover-up.
The entire 8-year term of Obama felt like eternity when it comes to Obamacare, and the entire US economy, or what’s left of it. His priority was persistently in favor of the bankers and the military industrial complex.
Worst of all, is his behavior post-2016 election where he sent 35 Russian diplomats home, based on the flimsy evidence-free narrative of Russian interference, when all the Russian media were doing is regular journalism – something that’s becoming even more foreign to Western media these days.

Of course all of NATO media did not hear anything about their rebels cutting off water to 5M civilians in Damascus for 21 days now!

To top it all, he turned over the entire US electoral system to the Nazi-controlled Department of Homeland Security to avert future “anomalies.”
In the end, you’re just a saliva, Obama.

Farewell, Obama: You Talked A Better Game Than You Played

Bryan MacDonald is an Irish journalist, who is based in Russia
I was there. In the Tiergarten in Berlin, in July 2008. And the more I think back on it, the more bizarre it was.
The US Democratic Party’s presumptive presidential candidate, Barack Obama, arrived in town to give a speech where he promised to achieve “a world that stands as one.”
He didn’t come to Berlin because he had some attachment to the city. Nor did he arrive to outline a masterplan to unite the planet. And, as it happened, he didn’t speak a lick of German on the day. Not so much as an “Ich bin ein Berliner.” Sadly, it probably wasn’t to avoid being accused of comparisons to jelly doughnuts either.
You see, there was no substance to the charade. Obama only wanted to speak in Berlin because it was where John Fitzgerald Kennedy made his most famous address, back in 1963. And he was trying to position himself as a modern JFK – with an endorsement from the late Ted Kennedy to boot.
But the difference was that Jack Kennedy was a great statesman, who had not only vision, but had implemented his dreams – and Obama was a fraud. And, eight years hence, I can’t believe Angela Merkel granted him permission to stage the event. Because if his opponent, John McCain, had won the election, the Chancellor would have spent years grovelling like a puppy who had devoured his favorite slippers.
Master Showman
We long ago learned how Obama was a great campaigner. Perhaps one of the most adroit who ever breathed. We’ve also discovered that once in office, however, he gets bored of making tough decisions and finds it difficult to apply himself.
There’s also the fact that he managed to play over 300 rounds of golf during his eight years in the White House, which showed a level of commitment Rory McIlroy would struggle to match.
Half a world away from Berlin, in Chicago, Obama gave his final speech as president last night. And we were treated to more of his trademark waffle. For instance, he has presided over an administration which saw economic inequality in America increase greatly. But rather than acknowledge this fact, he spoke of “the freedom to chase our individual dreams through our sweat, and toil, and imagination.”
Taking hypocrisy to a new level, the President remarked how “our nation’s call to citizenship has… (been) what pulled immigrants and refugees across oceans and the Rio Grande.” However, he has admitted under 15,000 Syrian asylum-seekers to the United States in the past two years, while Germany has taken in over one million. This, despite the fact Obama’s government dropped 26,171 bombs in 2016, while Berlin has sent less than half a dozen Tornados with strict orders to only blast ISIS.
In the same passage, Obama doubled down, insisting “that’s what we mean when we say America is exceptional.” By this logic, Germany must be phenomenal times a hundred or so – for taking in so many victims largely displaced by US meddling in the Middle East and North Africa. But Germany wasn’t mentioned at all in the address.
Duplicitous Destiny
Next, he moved onto democracy. And here the outgoing president made a mockery of the notion of sincerity. “I committed to President-elect Trump that my administration would ensure the smoothest possible transition, just as President Bush did for me,” he exclaimed. And at this point, you could almost smell the bullsh*t. Because over the past few weeks, Obama has done everything possible to undermine Trump.

He has placed fresh sanctions on Russia, in a bid to stymie his successor’s room for maneuver on resetting Moscow-Washington relations. Furthermore, he has questioned the basic legitimacy of Trump’s victory by, despite supplying no hard facts at all, alleging that Russians interfered with the outcome. And all of this has been done in the name of partisan politics, because he’s clearly upset about Hillary Clinton losing the election, and the consequences for his political legacy.
Moving on to the state of the US economy, Obama boasted that “the wealthy are paying a fair share of taxes.” So, let’s look at this supposition for a moment. Yes, it’s true that America’s top one percent are paying nearly 50 percent of federal income taxes. But the problem is that the top 0.1 percent (yes, 10 percent of the one percent) own more wealth than the bottom 90 percent of Americans. Thus, the only obvious way to tilt the pendulum back the other way is for the fortunate few to pay far more in penalties. Something Obama never even attempted to broach over his eight years. Yet, he has the gall to stand up in Chicago and brag about the current status quo.
And then matters reached high farce. Proving once and for all that he was a far superior campaigner than legislator, Obama reverted back to electioneering mode. “We’re going to have to forge a new social compact to guarantee all our kids the education they need,” he exulted. “To give workers the power to unionize for better wages. To update the social safety net to reflect the way we live now. And make more reforms to the tax code so corporations and the individuals who reap the most from this new economy don’t avoid their obligations to the country that’s made their very success possible.”

All of these exhortations were punctuated by applause, as if the assembled crowd had just seen the future as the great orator reached for the stars. The clapping transformed into loud cheers when he testified how “(we need to) make more reforms to the tax code so corporations and the individuals who reap the most from this new economy don’t avoid their obligations to the country that’s made their very success possible.”
Well guess what, Barack? You just served eight years in the Oval Office and you didn’t do any of these things. Because you are a huckster, a charlatan, a bluffer, a sham artist, and a fraud. A conman masquerading as a diviner, a prophet, and a soothsayer. One of the greatest sermonizers since the soap box was first imagined, reveling in the dictum – “do as I say, not as I do.”
You will leave the White House next week. Don’t let the door hit you on the way out, you old phony.
https://www.rt.com/op-edge/373318-so-long-obama-dont-let-door/

Obama will be stepping down from the White House with half of the United States population being optimistic with the incoming Trump administration.
Perhaps, the only positive thing that happened during his reign is the consolidation of efforts of the global resistance movement which made possible the rise of populist leaderships around the world, aided by the massive disclosures using the Wikileaks whistleblowing platform.

4 thoughts on “Farewell, Obama: You Talked A Better Game Than You Played”