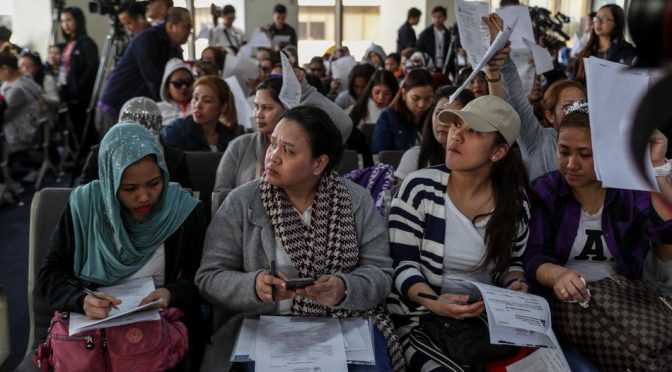 The Duterte government has been from the very beginning, implementing a grand plan to bring all overseas Filipino workers [OFWs] home. This idea is brought about by a first-hand experience in rescuing distressed workers in the Middle East, among others, of the then-lawmaker president. He was told by his lawmaker counterpart that all household workers are treated as sex slaves by default in certain Arab tribes.
The breaking point for President Duterte was when the news came along about a Filipina who was stored in a freezer for more than a year by a “Lebanese-Syrian couple,” who were then living in Kuwait.
This prompted the government to immediately impose a total ban of OFWs to Kuwait until today.More than a week ago, a video on the actual extractions of distressed workers conducted by the Philippine embassy in Kuwait went viral.


Consequently, this led to the proclamation of the Philippine Ambassador to Kuwait as persona non grata, 3 days ago.

The Duterte government did not expect this, especially with the help extended by the Filipino medical contingent during the “Iraq invasion” of Kuwait.
In response, Duterte formally announced the government’s grand plan to repatriate all workers from Kuwait in his talk to the Filipino community in Singapore, yesterday.

“I would like to address to their patriotism: come home. No matter how poor we are, we will survive. The economy is doing good and we are short of our workers,” he said.
These homebound workers will be reabsorbed through the extensive infrastructure projects now going on in the Philippines, which sought to interconnect the islands together and provide easy access in and out of landlocked provinces through high-speed railways, and airports. These new infrastructures will hasten the influx of tourists to the islands.
Alongside these projects, the long established tourist destinations are now being rehabilitated after years of total neglect and unfettered exploitation by the Deep State established local oligarchy.

It is estimated that by the complete development of the tourism industry alone, the country could reach as high as one of the top 30 economies of the world, at the end of Duterte’s term in office.
The world renowned Boracay will be turned into something like this in 6 months, or so.

The OFW community has for decades carried the burden of at least 50% of the economy. In fact, it was their collective toil which insulated the Philippine economy from the Soros-injected Asian financial crisis in 1997. Yet, only a small fraction of the 1% of the Philippine population, the top tax evaders, has truly benefited from it.
The Duterte government is seeking to provide social justice by taking all public properties and domains away from the oligarchy, through tax evasion cases and outright implementation of a true land reform program.
The oligarchy, in turn, is actively conniving with their Western benefactors in destroying Duterte’s reputation abroad, as a pretext for eventual regime change operation like what is now persistently imposed on the Syrian population.

13 thoughts on “Duterte Pulling Out Overseas Workers from Kuwait”