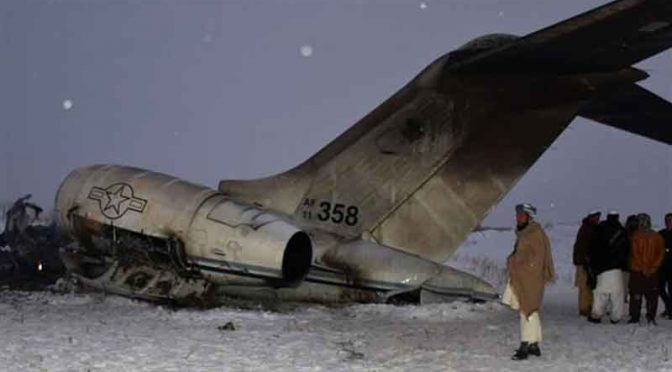 Russian intelligence sources have claimed that Michael D’Andrea, head of CIA operations in Iran and who orchestrated the assassination of Iranian General Qassem Soleimani, was killed in a US spy plane downed yesterday in Ghazni, Afghanistan.

The plane with US Air Force markings reportedly served as the CIA’s mobile command for D’Andrea, who earnt several nicknames including: Ayatollah Mike, the Dark Prince, and the Undertaker. He is one of the most prominent CIA figures in the region, appointed head of the agency’s Iran Mission Centre in 2017. Under his leadership, the agency was perceived to take a more “aggressive stance toward Iran”.

Michael D’Andrea was the top CIA official responsible for the assassination of General Soleimani, the commander of the Quds Force of Iran’s Islamic Revolution Guards Corps (IRGC), along with Abu Mahdi al-Muhandis, the second-in-command of Iraq’s Popular Mobilization Units (PMU), in a US airstrike in the Iraqi capital Baghdad early this month.

“Andrea is the most prominent figure in the US CIA in the Middle East. He has been in charge of operations in Iraq, Iran and Afghanistan,” an unverified media report said.

The Taliban claimed to have shot down the plane carrying D’Andrea with the following evidence provided,

“An aircraft of American occupiers has crashed in Ghazni province,” Taliban spokesman Zabihullah Mujahid said in a Pashto-language statement, adding that all the crewmembers on board have been killed, AFP reported.

…whilst the US has denied the claim but has acknowledged the loss of a Bombardier E-11A plane in central Afghanistan.

Graphic images online have already circulated purportedly showing some of the charred remains of those on board.

An exiled Iranian journalist who has written previously for the hard-line Javan daily newspaper suggested the IRGC was involved, tweeting:

“The American Gulfstream plane was downed in Afghanistan by the Taliban. They say that intelligence officers were on board. This report has not yet been confirmed, but if it is, it is possible that the issue of Iran will also emerge in this case.”

Another Iranian journalist who writes for Mashregh newspaper, described as having close links to IRGC, tweeted not long after the news broke out:

“We will attack them on the same level as they are attacking us.”

Soleimani’s successor as head of the IRGC’s Quds Force, Esmail Qaani, has established ties in Afghanistan going back to the 1980s. Additionally, the chief commander of the IRGC, General Hossein Salami, warned that no American military commanders will be safe if the US administration continues to threaten Iranian commanders.

According to a 2012 Washington Post article, D’Andrea’s colleagues described him as a collection of contradictions. A chain-smoker who spends countless hours on a treadmill. Notoriously surly yet able to win over enough support from subordinates and bosses to hold on to his job. He presides over a campaign that has killed thousands of Islamist militants and angered millions of Muslims, but he is himself a convert to Islam.

Although US government and media has not released any official photo or biography of Ayatollah Mike who is in his early 60s, Iran’s view could gather some interesting information about him and his family.

His first overseas assignments were in east Africa, where he met his wife and converted to Islam in order to marry her. Faridah Currimjee D’Andrea, almost 10 years older than her husband is daughter of a wealthy family from the Mauritius with Gujarati origins.

Currimjees own a family business and are operating in different business sectors such as Telecoms, Media, Real Estate, Tourism, Financial Services and Energy. Faridah is one of the senior directors of Currimjee group and her family firms can be used as CIA covers.

D’Andrea has not an easy job in his new post. The U.S. has no embassy in Iran to provide diplomatic cover for CIA, and Iran’s intelligence services have more than three decades of experience in countering American espionage attempts.

But he oversaw hundreds of drone strikes, which according to The New York Times “killed thousands of Islamist militants and hundreds of civilians”.

D’andrea is credited with being the mastermind behind the CIA’s notorious “signature strike” used to kill people based on their behaviour, not identity, subsequently used to determine someone’s guilt or likelihood of being a terrorist, and was involved in the assassination of Hezbollah member Imad Mughniyah in Damascus, Syria.

He was central to the post-9/11 interrogation programme and ran the CIA’s Counterterrorism Center. Assassinations and torture were central to his approach.