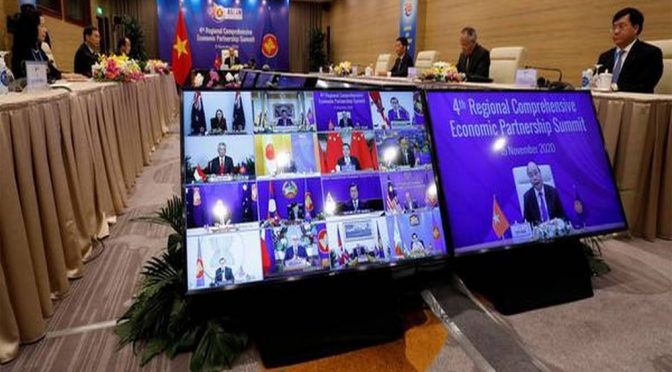 While a civil war is looming in the US, several nations in the Asia Pacific region are silently bringing their economies closer together, and have finally signed the world’s biggest trade agreement ever. This milestone proves that these countries strongly reject the view that a threat of force is the only means of maintaining order in the region.

Competing countries like China, South Korea and Japan are among those that signed the Regional Comprehensive Economic Partnership (RCEP), which along with their ASEAN neighbors comprise a total of 2.2 billion population and a combined $26.2 trillion annual GDP.

Top officials from 15 nations that also include Australia, New Zealand and the 10 members of the Association of Southeast Asian Nations inked the Regional Comprehensive Economic Partnership, or RCEP — nearly a decade in the making — on the final day of the 37th Asean Summit hosted virtually by Vietnam.

… Supporters of the trade pact, which covers 2.2 billion people with a combined GDP of $26.2 trillion, said it will bolster pandemic-weakened economies by reducing tariffs, strengthening supply chains with common rules of origin, and codifying new e-commerce rules.

Among the benefits of the agreement include a tariff elimination of at least 92% on traded goods among participating countries, as well as stronger provisions to address non-tariff measures, and enhancements in areas such as online consumer and personal information protection, transparency and paperless trading, according to a statement issued on Sunday by Singapore’s Ministry of Trade and Industry. It also includes simplified customs procedures while at least 65% of services sectors will be fully open with increased foreign shareholding limits.

Imagine the impact when this newly formed organization decides to stop using US dollar in favor of their sovereign currencies.

As opposed to a world of endless conflict, it must be noted that the Eastern Alliance has been consistently offering its combined resources for the establishment of a highly developed planet in the last 90 years, i.e. Asian royal families have lent a sizeable portion of the historical treasures of the region to finance the economy of the West through what is known as the Collateral Accounts, in exchange for developing the entire planet with Western scientific advancements.

However, the West opted instead to use their scientific advancements to foment the world with wars and endless conflict towards hegemony by bypassing the will of the UN Security Council on multiple occasions. The pursuit for Full Spectrum Dominance has blinded the Western oligarchy in the better half of the 20th Century and onward, away from what was already agreed upon trajectory of unfettered human development.

As in previous US administrations, with the exception of JFK’s, the United States under President Trump also rejected the idea of mutual progress by launching a trade war with China, while the US Navy has been conducting multiple “freedom of navigation” sorties in the South China Sea to project its imagined superiority, and provoke tension in the region.

Military intimidation may have worked centuries ago, but negotiating from a position of self-assessed strength can only go so far, especially when you’re dealing with the real masters of the Art of War.

So, the only option available for the US is really just to cooperate with the rest of the world through economic means, as being shown now by the Eastern Alliance, and as it was during the time of John F. Kennedy and Eisenhower.

Historically, the Western oligarchy and the Vatican have succeeded in siphoning vast amounts of gold from Asia Pacific through the issuance of gold bonds in the 1930s and outright plunder during WW2 using the Japanese Imperial Forces in the service of the Vatican.

In one of these iterations at cooperation between the East and the West, the Green Hilton Memorial Agreement resulted in the subsequent assassination of the US signatory to the agreement, Pres. John f. Kennedy, and the controlled demolition of the WTC Towers in 2001, which was to prevent the announcement of the maturity, and return of the assets covered in, the Collateral Accounts to its rightful owners.

“In 1963, President John F. Kennedy entered into an Agreement with President Soekarno to provide the funds to allow the United States Treasury to print its own currency, thus subverting the “right” to print the currency held by the Federal Reserve. The Agreement would have transferred some 59,000 tons of gold to underpin this currency.”

Now, Asia Pacific has taken a bold step to further develop the planet with, or without, Western participation.