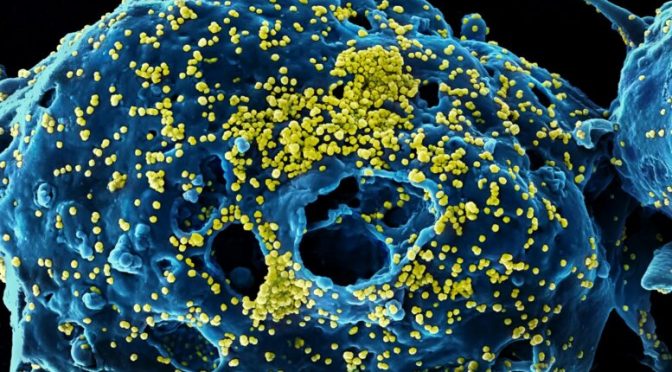 Medical ethics is rapidly morphing to permit the release of contagious vaccines that would require only a small percentage of the population to be vaccinated. The rest of humanity would contract the vaccine in the same way as any contagious disease. This is fulfillment of the Transhuman goal to create H+, or Humanity 2.0.

A little more than a year later, when the Event 201 scenario morphed from “hypothetical” to concrete, it became clear that sponsors of the event intended to see the majority of the world vaccinated against COVID-19.

Accomplishing this goal is a “monumental challenge,” however. In the U.S., more than one-third (38% to 45%) of adults continue to decline the unlicensed, Emergency Use Authorization injections, despite a marketing blitz that has included both carrots (ranging from the chance to win cash payments to a free order of fries) and sticks (such as nasty calls to “get personal” and “shun” the unvaccinated).

Although some of the uninjected tell pollsters they plan to eventually get the vaccine, a solid minority remains committed to never doing so. The same pattern appears to hold true globally: Roughly one-third of adults worldwide said they will not take a COVID shot.

While social and behavioral science researchers apply “soft science” techniques in an attempt to maneuver vaccine confidence into more acquiescent territory, bench scientists have a different option potentially waiting in the wings — genetically engineered vaccines that “move through populations in the same way as communicable diseases,” spreading on their own “from host to host.”

In theory, self-spreading vaccines (also referred to as self-disseminating or autonomous) can be designed to be either transferable (“restricted to a single round of transmission”) or transmissible (“capable of indefinite transmission).”

Vaccine scientists concede transmissible vaccines “are still not mainstream, but the revolution in genome engineering poises them to become so.”

The makers of self-disseminating vaccines use recombinant vector technology to build genetic material from a target pathogen onto the “chassis” of a viral vector deemed “benign,” “innocuous” or “avirulent.” This is similar to the viral vector approach used to produce the Johnson & Johnson and AstraZeneca COVID vaccines.

For Johns Hopkins, the appeal of vaccines that are intentionally engineered to be self-disseminating seems obvious. The university’s Center for Health Security made its case explicit in a 2018 report, “Technologies to Address Global Catastrophic Biological Risks.” The report stated, “These vaccines could dramatically increase vaccine coverage in human … populations without requiring each individual to be inoculated.”

Further spelling out the utilitarian implications of self-disseminating vaccines, the report’s authors stated, “only a small number of vaccinated individuals would be required to confer protection to a larger susceptible population, thus eliminating the need for mass vaccination operations.”

From a programmatic standpoint, this strategy would have the advantage of being “cheaper than vaccinating everyone by hand.” Perhaps even more significantly, however, it would override one of the “thorny ethical questions” that mass vaccination programs routinely wrestle with: informed consent.

As the university’s Center for Health Security briefly acknowledged in its report, self-disseminating vaccines would essentially make it impossible for “those to whom the vaccine subsequently spreads” to provide informed consent at all.

by Rowenna Hoskin via Cardiff University

With COVID-19 on the rampage, vaccinations are at the forefront of everyone’s minds. While scientists are working on a cure for COVID-19, the benefit of prevention of disease is obvious.

Many diseases – like Rabies, COVID-19, SARS and Ebola – originate in animals and are then passed onto human populations.

In the past, the only methods to reduce transmission between wildlife and humans was to reduce human contact with disease-harbouring species, or to cull the species.

There have been vaccination programs in the past, a classic example being Rabies: by vaccinating dogs and other carnivores, rabies was suppressed in those populations which reduced the risk of humans contracting rabies. This was a very successful program and virtually eliminated rabies in the US and Europe. Rabies still kills more than 55,000 people a year across Africa and Asia where the cost of vaccination projects are preventing a sufficient level of immunity.

The problem that arises with these programs, the reason why they are very expensive, is because of the rapid population turnover and large population sizes of species. This makes maintaining immunity within populations very difficult and  expensive – fortunately another solution is now available.

Scientists have created vaccines that spread themselves; these self-spreading vaccines can be developed in two ways.

The convenient approach relies on applying the vaccine to the fur of the captured animals and releasing them back into the wild. When they return to their natural homes, the vaccine will spread as social grooming takes place. As the individuals groom each other they ingest the vaccine which magnifies the level of immunity that populations can reach. This process shows promise for reducing the threat of rabies transmitted from vampire bats.

The second approach is a bit more radical: it relies on inserting a small piece of the genome of the infectious disease agent into a benign virus that spreads through the animal population. As the transmissible vaccine spreads from animal to animal, it immunises them against the target infectious disease. Immunity will increase within the population and the threat to humans will be heavily reduced.

The technology to create self-disseminating vaccinations now exists and has already been taken to field trials. Currently experiments are focused on protecting wild rabbit populations from a viral haemorrhagic fever using this technology.

Scientists are now looking at developing prototypes for several human pathogens like Ebola and Lassa. This technology could be revolutionary in reducing the threat of disease that is transferred from animals to humans.

Another benefit to this technology is the fact that disease would be able to be controlled, meaning that extermination of wildlife species would no longer be necessary. Ecologically important disease reservoir species populations will be conserved which maintains a healthy interdependent environment.

There is still a lot of work left to do before this technology is widely implementable;  field trials will be testing effectiveness and possible unexpected consequences of self-spreading vaccines.

Considering the money being spent on a cure for COVID-19, prevention is unarguably a better method than waiting until it is too late. Vaccines that prevent pathogen transmission to human populations from the start are certainly a better investment than their cures.