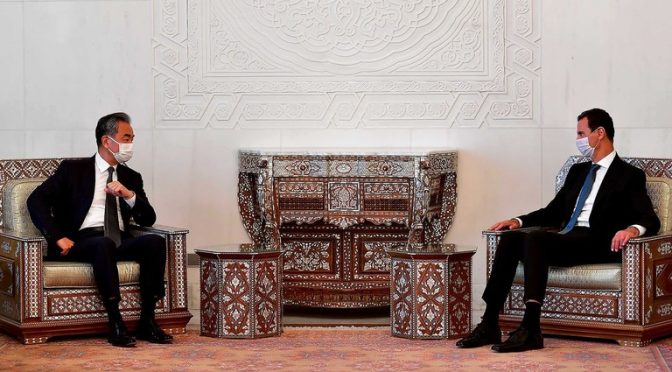 The recent visit of China’s foreign minister to Damascus as the first foreign guest since President Bashar Assad was sworn in for a second seven-year term is significant – and signals a shift that will annoy Washington and London.

Over the weekend the Chinese Foreign Minister Wang Yi visited Syria during a trip to the Middle East and met with President Bashar Assad. Yang is known for his highly proactive diplomacy, often dashing across multiple regions of the world to meet his counterparts, but this particular visit was particularly notable for a number of reasons.

First of all, it was the first high-level Chinese visit to Syria since the civil war began. The chaos tearing the country apart and efforts towards regime change by the West made it untenable for many years. On the back of this, what made it on the second note more notable was that Wang attended on the day Assad was sworn in for a new term as president, following May’s elections.

That’s a big endorsement, to put it mildly. The timing and symbolism of the visit was designed to confer legitimacy upon him as Syria’s president, which Beijing has not done before. After the visit, China then came out with an almost manifesto-like spree of pledges concerning Beijing and Damascus, again, something it had not done before.

China pledged support for Syria’s territorial integrity and national sovereignty, affirmed its opposition to regime change and foreign intervention, set out opposition to sanctions and also pledged itself as an economic partner by inviting the Arab country to join the Belt and Road Initiative. In exchange, Assad gave his “unconditional” support to China on Hong Kong, Xinjiang and Taiwan.

What happened in Damascus is arguably rhetorical; one can see it doesn’t pledge anything up-front, not even a penny of investment. But it is significant and has substance in that it marks a dramatic escalation of Beijing’s relationship with Syria in the midst of the controversy and assaults that Assad has experienced from the West over the past decade.

While this is not actually a change in China’s position or diplomatic principles, it is a shift from being a backyard player on the Syria issue to being a frontline one, tilting away from a previous approach of being careful not to aggravate the West as the war there waged on.

Now, China is placing itself in the driving seat and is expanding its diplomatic foothold right across the Middle East. This includes China’s recent strengthening of its relationship with Iran, including an investment pledge of an estimated £400 billion. Assad, so far, has received no such promise. Yet for Damascus and the Ba’athist Party, this is still a political endorsement which strengthens their hand after facing the brunt of sanctions and political isolation by the US and its allies.

Why is this happening now? Of all the countries for China to strengthen its relationship with, the rewards of embracing Syria seem low and the risks are high. It’s a move that is reflective of a changing geopolitical context, demonstrating how Beijing’s own strategic attitude to the West is both changing and hardening. China is less willing to continue to “appease” these countries.

Whilst Beijing has always quietly supported states despised by the West on the premise of non-interference, it has, in the past, nonetheless also been quick to throw them under the bus to keep its ties with Western powers.

But today’s world is different, and the US is increasingly pushing its allies to target China on a strategic level. As a result, Beijing is now less willing to “appease” these countries and is prepared to “hedge” against their agenda by actively empowering the countries the Western powers don’t like, and doubling down on ties to them. China was never anti-Assad, but for most of the civil war Beijing followed a “lay low” approach and quietly followed Moscow’s lead, never staking out its own agenda on the matter largely in contemplation of America’s priorities.

But now China owes no such respect to the US; Washington’s growing efforts to try and isolate Beijing through a variety of means and pursue geopolitical competition has ultimately drawn this epoch to an end.

Yet this shift isn’t all about the West; there’s a regional element to it, too, concerning the Middle East. China’s move to strengthen ties with Assad gives it strategic leverage, giving it teeth in how it deals with other powers in the region.

For example, neighbouring Israel has recently expressed more keenness to join the US camp against Beijing. China does not aim to make an enemy out of Tel Aviv, so how does it negotiate with them? The answer: by having more of a stake on the ground and using Assad as a bargaining chip. Beijing continues above all to have a “talk-to-all-sides” attitude in the region, even as it bigs up Assad. China also has healthy relationships with Saudi Arabia and the UAE. It supersedes regional rivalries to try to be a “friend of all” – but it will be more successful in getting these states to follow its will if it is itself a stakeholder, and that it is what it is doing here.

But besides strengthening ties, will China actually help rebuild Syria, a nation decimated by war? This is uncertain and, for the time being, not likely. As noted above, this is so far a penniless embracement.

Syria remains an extremely high-risk destination. Its war is not over in the conventional sense. Whilst Assad has won back the core of the country, he still faces pockets of rebels in the North, tensions with Turkey and Israel, and has half of his country illegally occupied by hundreds of US troops backing thousands of Kurdish forces. It’s volatile.

This means the scope for building infrastructure in the country is limited and China isn’t going to pour billions into a de facto war zone. The volcano may have long erupted, but it’s still boiling hot. In this case, Wang Yi’s visit was high on diplomatic symbolism but low on real substance.

China might be prepared to offer Damascus some tokens of aid, but for the most part this is about a diplomatic message which causes ripples in Middle Eastern and Western capitals. It’s a trip which is enough to annoy the West and frustrate its agenda, and demonstrates China’s expanding footprint, but don’t expect Beijing to launch another China–Pakistan Economic Corridor-style project for Syria just yet.