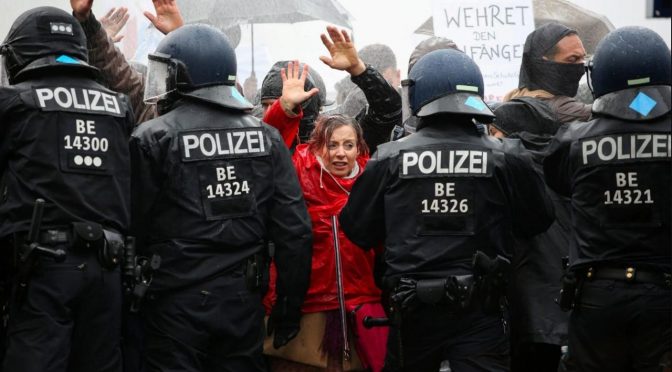 CNN continued its wall to wall broadcasts calling for unvaccinated people to be punished, with analysts again calling for those who haven’t gotten the COVID shots to be segregated from society and forced to pay for tests every single day.

The latest CNN ravings come on the heels of a leaked internal email from CNN’s Washington bureau chief complaining that the “carrot” is no longer working in terms of convincing Americans to get vaccinated and that authorities need to start using the “stick.”

“I think it depends on the circumstance,” Wen said, explaining “So if you’re going to the grocery store, and the grocery store doesn’t have the capacity to enforce some kind of proof of vaccination, then they have to say that indoor masking needs to apply, because we don’t know who’s vaccinated and who’s not.”

“The same thing for schools,” Wen continued, adding “Schools, you can’t expect the teacher in every school to be asking ‘well you’re not wearing a mask so are you vaccinated or not?’ And so that’s the case, everyone should be wearing masks.”

“But I can imagine there are already concert venues or workplaces that are saying ‘if you are not vaccinated, you can’t come, or you have to get a negative test.’ And that’s what’s needed in order to really incentivize vaccines at this point,” Wen further stated.

Wen previously suggested that life should be made as difficult as possible for those who are still opting not to take the shots, and that Americans should be banned from engaging in social events and forced to undergo PCR tests twice a week if they want to stay unvaccinated. She also previously advocated directly linking the amount of freedom Americans should be allowed to their vaccination status.

Next up on CNN, which should probably be renamed VNN, was Former White House senior COVID-19 adviser Andy Slavitt who proclaimed that the Biden administration should become “very aggressive” and force unvaccinated workers and students to take daily tests and to cover the costs themselves.

“We should be really seriously considering whether schools, workplaces, government agencies ought to be saying, ‘Hey, if you’re coming here, you need to be vaccinated. If you’re not, you need to show you have a negative test every single day,” Slavitt declared.

He continued, “Look, if people say they don’t want to be vaccinated, which some people might say, I think it’s perfectly reasonable to say that’s fine. We want you to show up every morning an hour before work and get a negative test. Maybe even at your own expense. Until the point where people will say, you know what? It makes more sense to actually get vaccinated. If you give people that option, I think you’re going to see more and more people take the option to get vaccinated.”

“In hospitals around the country, 97% of people admitted with Covid symptoms are unvaccinated, and 99.5% of all Covid deaths are also among the unvaccinated.”

CNBC provided no source, and there cannot possibly be a source. “Most people were vaccinated in mass clinics.  The vaccinations are not in their medical records.  There are no insurance claims for the vaccine, which was free.”

In other words, there is no way to know whether vaccinated or unvaccinated people are dying.

Again, the question before us is why are presstitutes and government health agencies concocting lies to scare people?

What the facts actually show is that it is the countries with the largest percentages of the populations vaccinated that are experiencing the most new cases.  The question is whether the new cases are illnesses caused by the vaccines.

First CNBC set up the story.  It provided facts that actually don’t mean very much. but sound frightening.  It said the virus is 1,000 times more transmissible than the original. In fact, precisely this strategy was used in the early days of Covid.

But what does that really mean?  In the real world, more transmissibility is generally associated with lowered virulence.  And that is precisely the case when you compare SARS-1 and SARS-2, and the Delta versus the original Covid strain.  Each has considerably less virulence than the earlier coronavirus.

It means the Delta variant might be as transmissible as the flu. And it happens to be the least virulent of the seven variants being evaluated in the UK.

Now that you have gotten everyone’s attention, you throw in some quotes from the CDC Director, who happily obliges with more meaningless drivel.

“The delta variant is more aggressive and much more transmissible than previously circulating strains,” CDC Director Dr. Rochelle Walensky told reporters at a briefing Thursday. “It is one of the most infectious respiratory viruses we know of, and that I have seen in my 20-year career.”

Aggressive sounds pretty bad, but what does it mean?  In fact, it has no medical meaning. The claim of high transmissibility is repeated, while nothing else is being said.

How transmissible is flu?  CDC states that between 3% and 20% of Americans get the flu each winter, within a brief 3 months. Delta is presumably in the same ballpark.

The stage has been prepared. The CDC Director has opined on the latest horribleness. The audience is nervous and paying full attention.

What comes next appears to be from a reliable source.  But in fact, it came out of left field.  There is no source.  No attribution whatsoever.

“In hospitals around the country, 97% of people admitted with Covid symptoms are unvaccinated, and 99.5% of all Covid deaths are also among the unvaccinated.”

The numbers cannot be verified by the press, or by me, or by anyone who does not have an official list of the vaccinated.  Most people were vaccinated in mass clinics.  The vaccinations are not in their medical records.  There are no insurance claims for the vaccine, which was free.  While the states and CDC do have those lists, somewhere, CDC has previously claimed it could not match the list of the vaccinated to reported post-vaccination deaths to corroborate and evaluate them.

In the UK, with similar vaccination rates as the US, it was reported that the majority of hospitalizations are occurring in the VACCINATED. This according to Sir Patrick Vallance, the UK’s chief science advisor, who is also known as a member of the Fauci Covid origin cover-up cabal.

According to Reuters, Vallance now says he misspoke.

Vallance earlier said at a news conference with Prime Minister Boris Johnson that 60% of people being admitted to hospital with COVID-19 have had two doses of vaccine.

When the public has no means of verification, the media (as well as government officials) can say anything they please.  How does 99.5% sound?  There’s nothing stopping you. So why not go for broke? And if there is pushback, just change the numbers tomorrow.

Compared to Europeans, Americans Are Sheep and Willingly Accept Tyranny

This is what it looked like today in Australia, Milan, London, and France.

Protests were worldwide today as many are fed up with elites whittling away their freedoms under the guise of COVID.

Thousands of anti-lockdown demonstrators took to the streets of Sydney and other Australian towns on Saturday to protest new lockdown measures amid a surge of COVID-19 cases in the country.

Dozens were arrested and charged after crowds broke through barriers and clashed with officers, hurling bottles and anything they could get their hands on.

The unmasked protesters marched from Sydney’s Victoria Park to Town Hall. News.com.au estimates 15,000 people took part in the march. Many chanted anti-lockdown slogans and held signs calling for “freedom” and “the truth.”

There was a significant police presence, including mounted police and riot control officers in response to what authorities said was an “unauthorized protest.”

The demonstrators defied restrictions on non-essential travel and mass public gatherings that could be extended through October.

The Greater Sydney area has been locked down for a month as infections rise.

Protesters were also seen in Melbourne and Adelaide.

There’s discontent with Australians being forced into lockdowns again as an outbreak of the delta variant began last month.

Protests are not limited to Australia. New COVID rules have been implemented across Europe as Delta infections flare-up, which demonstrators in France and Greece recently took to the streets. The UK has even triggered widespread panic through a new app that notified tens of thousands of people they must quarantine for ten days because of possible exposure.

Anti-lockdown and anti-vaccine-passport protests erupted across Europe on July 24, according to media photos and videos.

Thousands upon thousands of demonstrators came out in London, Dublin, Paris, Rome, Athens, and other cities across Europe, according to footage and news reports.

The demonstrations in France appeared to be the most tense, with riot police firing tear gas as clashes erupted in central Paris.

Police sought to push back demonstrators near the capital’s Gare Saint-Lazare railway station after protesters knocked over a police motorbike ridden by two officers, news footage showed. Scuffles between police and demonstrators also broke out at the Champs-Elysees thoroughfare, where tear gas was fired and traffic was halted, it showed.

France’s Interior Ministry said that about 160,000 people partook in the protests on July 24—sharply up from 114,000 the previous week, Reuters reported.