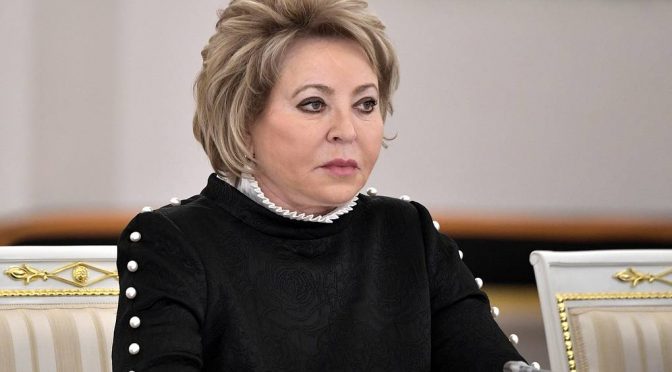 Valentina Matviyenko pointed out that Russia vividly demonstrated the immense creative potential of living together in peace and harmony, and in close contact with members of different nationalities, religions and cultures.

“Russia is interested in deepening ties with Islamic countries. “Our country, with its historical experience and everyday practices, vividly demonstrates the immense creative potential of living together in peace and harmony, and in close contact with members of different nationalities, religions and cultures,” the Federation Council speaker pointed out.

She welcomed the summit’s traditional approaches, namely “the determination to build a system of international economic relations free of unfair competition, political and other kinds of pressure.”

The senate speaker noted that discussions focusing on the most pressing issues related to Russia’s relations with the Islamic world were underway at the summit, including Islamic financing, ways to boost Russia’s ties with Muslim countries in relation to joint investment projects and ethnic businesses as a response to the challenges of our time.

Matviyenko wished the summit’s participants success in building business contacts and enhancing the atmosphere of trust, “which is the guarantee of a true partnership.”

Zamir Kabulov noted that Pakistan is interested in Afghanistan returning to normality and becoming a reliable trade and economic bridge connecting Pakistan and Eurasia.

MOSCOW, July 29. /TASS/. Some forces in Pakistan would like to replicate what the Afghan Taliban movement (outlawed in Russia) did and destabilize the situation in the country, Russian Special Presidential Envoy for Afghanistan Zamir Kabulov said during an online briefing on Thursday.

“Pakistan is Russia’s solid partner. We are on the same wavelength as top Pakistani officials who have made public statements that they are not interested in Afghanistan turning into an Islamic Emirate that would influence Pakistani society, where there are forces that would be inspired by the Afghan Taliban’s experience and would try to destabilize the situation,” he pointed out.

“Pakistan, along with Russia and almost all neighboring countries, is interested in Afghanistan returning to normality and becoming a reliable trade and economic bridge connecting Pakistan and Eurasia,” Kabulov noted.

The Russian presidential envoy emphasized that a rise in tensions between Kabul and Islamabad had been caused primarily by the domestic political situation in Afghanistan. “Sometimes it seems that when those in Kabul who are supposed to protect their land from the Taliban fail to do that, they start searching for someone to blame and always consider Pakistan to be a suitable scapegoat,” Kabulov said.

Due to their flip-flopping foreign policy and outright hypocrisy, no country wants to deal with the Western Oligarchs anymore. Those who are still cooperating with the latter are either forced to do so under threat of being toppled, or have no other option but to be in bed with like minded psychopaths.

One thought on “Russia Seeks to Deepen Cooperation with Islamic World”