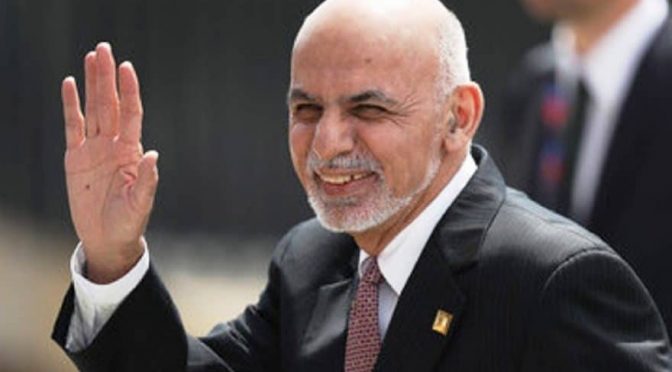 True to form, last Sunday the US Puppet president of Afghanistan, Ashraf Ghani, fled Kabul with four luxury vehicles and a helicopter stuffed so full of cash that a huge pile of it could not fit and had to be left on the tarmac.

46 years earlier, U.S. client Nguyen Van Thieu tried to smuggle $73 million worth of gold bullion out of South Vietnam after its liberation by the communists.

These two men symbolize the corruption and greed that lies at the core of the U.S. empire.

The Russian embassy in Kabul reported on Monday that Afghan President Ashraf Ghani fled Afghanistan with four vehicles and a helicopter full of cash as the Taliban took control of Kabul.

The former World Bank academic — who holds a doctorate from New York City’s Columbia University — didn’t say where he was going, but Al Jazeera reported later that he had flown to Uzbekistan.

Nikita Ishchenko, a Russian embassy spokesman in Kabul stated that as far as the “collapse of the (outgoing) regime, it is most eloquently characterized by the way Ghani fled Afghanistan.”

“Four cars were full of money, they tried to stuff another part of the money into a helicopter, but not all of it fit. And some of the money was left lying on the tarmac,” Ishchenko was quoted as saying.

Russian President Vladimir Putin’s special representative on Afghanistan Zamir Kabulov earlier expressed hope that Ghani and other fleeing officials would not take all the money from the state budget—which would be difficult to recoup.

Saad Mohseni, who owns one of Afghanistan’s popular television stations said that Ghani would forever “be known as the Benedict Arnold of Afghanistan. People will be spitting on his grave for another 100 years.”[1]

Ghani’s ignominious departure resembles that of another deposed U.S. client, Nguyen Van Thieu, who according to the New York Times, tried to smuggle $73 million worth of gold bullions out of South Vietnam in April 1975 after Vietnam had been liberated by the communist forces.

Thieu ended up living out his days in a wealthy suburb of Boston and skiing in the pristine mountains of Vermont.

In 1963, he was one of the Young Turks responsible for the assassination of South Vietnamese Premier Ngo Dinh Diem.

Subsequently, he emerged as the head of a ruling military tribunal and then after a few rigged elections, president of South Vietnam.

According to his obituary in the New York Times, Thieu ruled the Republic during its bloodiest years and proved himself a brilliant strategist, not on the battlefield, but in surviving palace intrigues and feuds.

Ashraf Ghani and the Beirut Club

As CAM previously reported, in the 1970s, Ghani had been part of a group of mostly Pashtuns known as the Beirut club, which had been sent to study at the American University of Beirut after, in a visit to Kabul, Henry Kissinger noticed that Afghan leader Mohammed Daoud Khan was surrounded by Soviet advisers.

From that point on, members of the Beirut club–which included neoconservative Zalmay Khalilzad, the U.S. Ambassador to Afghanistan from 2004-2005–were groomed for power, and brought into the American orbit.

From 2002-2004, Ghani served as Foreign Minister of the Hamid Karzai government where he oversaw the flow of billions of dollars of foreign assistance.

A huge amount of the money was stolen or used to pay bribes to corrupt government officials.

Later as President from 2014-2021, Ghani allied with Khalilullah Frozi, who was supposed to be serving a 15-year prison sentence for his role in defrauding Kabul Bank of nearly $1 billion of depositors’ money.[3]

Afghanistan in this period ranked among the 20 countries “having the highest perceived level of corruption” as laid down by the Corruption Perception Index.

U.S. government leaders claim over and over again that they are intervening in foreign countries to spread good governance and democracy though end up empowering leaders of the caliber of Ghani and Thieu who steal and cheat their fellow countrymen and grow wealthy off their misery.

The reason for this outcome is not that hard to discern if we consider the underlying interests driving U.S. foreign policy.

Both Afghanistan and South Vietnam were viewed by the real drivers of U.S. foreign policy—the Kissingers, Rumsfield’s, Kagan’s and Brzezinski’s—as chess pieces, that the U.S. strove to control for its own purposes.

In Vietnam, the goal was to project U.S. power in the Asia Pacific and prevent the emergence of a strong socialist nation; and in Afghanistan, it was to project power in the Middle East and Central Asia and tap into the country’s unexploited mineral wealth.

Given these agendas, the only local-based leaders who would ally with the U.S. were unscrupulous opportunists willing to sell-out their own countrymen and women.

The U.S. furthermore created opportunities for corruption through the massive interjection of foreign aid on an otherwise hollow economic base.

Ashraf Ghani and Nguyen Van Thieu were thus both made in America.

They serve as symbols of an empire underlain by violence and greed whose global legitimacy has suffered another major blow.

Jeremy Kuzmarov is Managing Editor of CovertAction Magazine. He is the author of four books on U.S. foreign policy, including Obama’s Unending Wars (Clarity Press, 2019) and The Russians Are Coming, Again, with John Marciano (Monthly Review Press, 2018). He can be reached at: [email protected].

One thought on “U.S. Puppets, When They Finally Get Kicked Out, They Steal Much of the Country’s Treasure as They Can”