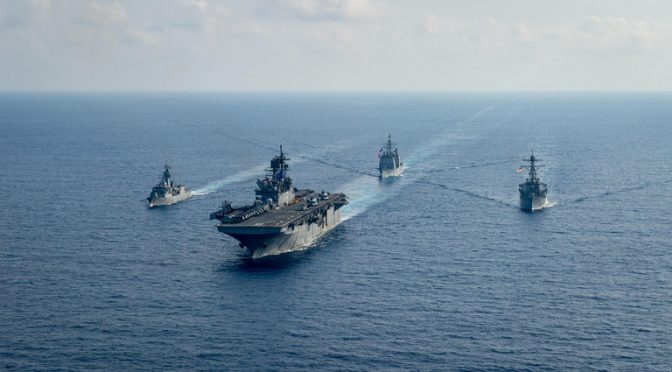 In today’s polarised world, the situation in this hugely significant region of the Pacific is frequently portrayed as either Chinese expansionism or American imperialism. As ever, the truth of the matter is much more complicated.

While attempting to brush off the ongoing catastrophe in Afghanistan, US Vice President Kamala Harris is pursuing her long-awaited tour of Southeast Asia, with stops in Singapore and Vietnam. Here, she has accused Beijing of “intimidation” and “coercion” in the South China Sea, a key strategic waterway which Beijing has long claimed as its own via the ‘nine-dash line’.

The US has for some time made resisting China’s claims in this region a staple of its foreign policy, incorporated under the ‘Indo-Pacific Strategy’, wherein it sought to increase its naval presence in the contested waters through ‘freedom of navigation’ exercises and encourage allied countries to do the same.

Roughly a year ago, Mike Pompeo officially denounced the nine-dash line as illegitimate, with Australia following suit. The anti-Beijing narrative seeks to simplistically portray the South China Sea situation as an example of ‘expansionism’ and ‘aggression’ by China. This may seem logical to some, given it puts the surrounding countries in an uncomfortable situation, but is this really the case?

Is there not more to this story? Every coin has two sides, and the South China Sea debacle is in fact a reaction to Washington’s growing anti-China policies, a cycle of escalation which commenced in the Obama era, as opposed to the simplistic interpretation of ‘aggressive’ or ‘ambitious’ behaviour towards Beijing. It is less specifically about third-party countries, as much as they may be aggravated by it, and more about responding to America’s attempts to encircle and militarize China’s periphery. This created a loop, kicking off with the ‘US pivot to Asia’ and subsequently intensifying.

Of course, there is a reasoned historical background to this. If one only consumes mainstream media coverage, you might be inclined to believe that China one day ‘decided’ that it ought to own the South China Sea. It is conventional enough to conceive it that way, but in fact the ‘nine-dash line’ map is a territorial and maritime claim which pre-dates the existence of the People’s Republic of China itself, and was a claim advocated by the predecessor Republic of China State (the government of which is now in Taiwan, and still officially claims this boundary) in 1947 as part of a UN haggling.

With the surrender of Japan, who had of course seized territory from many Asian nations and left a litany of disputes behind, the Republic of China argued that it rightfully owned the Paracel, Pratas, and Spratly Islands. Yet it doesn’t stop with this; the insistence upon the nine-dash line as a maritime boundary has even deeper origins, as a product of clashes between the Qing Dynasty and the French Empire who ruled ‘Indo-China’.

This is a historical issue which has subsequently taken on a contemporary strategic significance, something exacerbated by growing strategic distrust with the US, and also the fact China simply has the capabilities and also the urgency to consolidate its claims and ‘control’ the region in a way that was not relevant in the past few decades.

Mao Zedong never had the navy nor the technology for it to be taken seriously, and nor was the US at that point in time attempting to pursue a regionalized containment of China. Beijing’s own strategic logic has long interpreted American behaviour through the lens of ‘encirclement’ – that is, an effort to establish military supremacy all the way around China’s exterior in a bid to politically dominate and constrain it.

Its primary strategic objective is not ‘hegemony’, as is so misleadingly claimed. It is preventing this from occurring – but of course this, by default, expands China’s military power, provoking tensions. Beijing sees a number of American-aligned chess pieces in this game. This includes Japan, increasingly South Korea, the island of Taiwan, the US territory of Guam, the US territory of the Northern Mariana Islands, to some extent the Philippines to the east, India to the west, and then of course the UK sailing its aircraft carriers through the region too.

Put them all together and you have an entire coalition of US partners and allies surrounding you, with America itself increasing its naval and military assets in the region. What do you do in order to prevent this?

The South China Sea, as it happens, has significant stakes. It’s a passage between Asia and the rest of the world, to the east or west. It’s China’s primary maritime route in and out of Asia to the rest of the world, comprised of 64% of its shipping trade, one third of global shipping as a whole, and an accumulated value of $3.37 trillion. In a conflict scenario, China fears that the United States and its allies would attempt to navally embargo China via this encirclement strategy – simply cutting it off to the world, bringing its economy to its knees, nixing its energy imports, as well as providing easy access for these countries to bomb China’s territory.

Whilst this is one reason China is extensively pursuing transcontinental land routes via the Belt and Road initiative, it’s also the reason China is responding to American activities by increasing its military presence in the South China Sea through building up its navy, building military and air bases on contested islands, as well as radars, anti-aircraft weapons, and ballistic missile capabilities. This is all part of a conflict strategy premised on ‘area-denial’ that is making it impossible for US forces to enter, ensuring it can secure the mainland and prevent others from aiding Taiwan.

The US and its allies like to frame their response to China through the constant buzz-phrase “freedom of navigation” – saying “we will sail where we like” and that it is “upholding international norms,” but this is sugar-coating what is actually happening: military-led containment of China is masquerading as an upkeep of international law. Of course, in normal times, China is not truly trying to block the passage of anyone, and it all stands as a code-word for sustaining US naval supremacy, a logic of hegemony which is derived from the “Britannia rules the waves” mantra of old.

If you have the most powerful navy and want to sustain global dominance, of course you’re going to insist on a rule which demands you can sail absolutely anywhere without restriction because it favours your preferences.

In reality, the US is not a party to the UN convention on the law of the sea, yet subsequently preaches it to China. But Beijing’s challenge in the midst of these diplomatic offensives by Washington, and what invites the US presence into the region, is that the South China Sea controversy inevitably infringes upon the maritime claims of third parties, and these third parties subsequently become the means which the US strives to justify its regionally focused China containment policy.

If Beijing is to beat out the US, it has to learn to compromise with these countries accordingly and assure them its intentions are not threatening. However, for the US to be pushed out of the region means you are de-facto accepting Chinese dominance.

In this case, despite US pressure, is it any wonder the states of Southeast Asia really do not want to ‘choose’ in this dispute? The South China Sea at its most basic insight is a US versus China military struggle for supremacy in the region, with Beijing ramping up its militarization to counter American encirclement, which itself creates a cycle of escalating tensions.

However, since China is ‘the home team’, so to speak, with a permanent geographic advantage, one wonders how long the US and its allies can keep up this game.