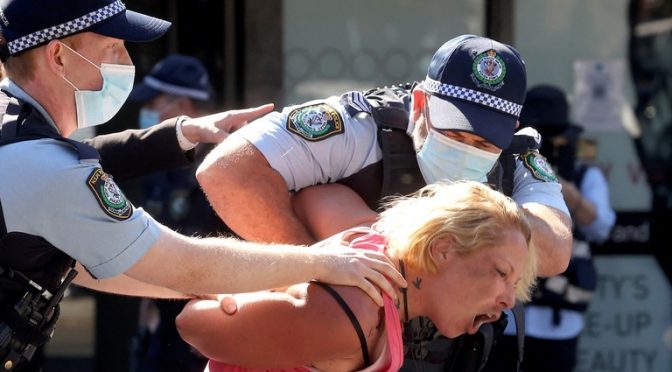 The Australian government has been on the receiving end of more and more criticism for its COVID response lately, not just domestically but from overseas.

There’s a lot to criticize, from soldiers patrolling state borders and policing the streets of Sydney, to people being arrested for merely posting about lockdown protests on social media, to police accessing QR-tracing information and firing projectile weapons at lockdown protesters, to news broadcasters naming and shaming Covid patients who violate isolation orders, to the frequently ineffective hotel quarantine system for travellers being replaced with purpose-built quarantine facilities and Orwellian surveillance apps. The states of both Victoria and New South Wales have begun moving toward reopening after the Delta variant proved zero-Covid goals unattainable even amid strict lockdowns, but will do so by adding Australia to the growing list of nations that have implemented the dangerously authoritarian policy of vaccine passports.

And there are other aspects of this trend that have nothing to do with Covid. One of the most controversial recent developments in Australia’s escalating government overreach (and potentially the most consequential in the long term) has been the hasty passing of a new law greatly expanding government surveillance powers, which allows law enforcement to hack into people’s devices and collect, delete, or even add to and alter the data therein, as well as take control of their social media accounts, supposedly “in order to frustrate the commission of serious offences online.”

Critics tend to lump this sweeping surveillance state escalation in with authoritarian policies related to the pandemic, but the bill makes no mention of Covid; its proponents cite its utility in fighting terrorism and child exploitation. Indeed this bill, which will certainly lead to myriad abuses, is just the latest in a continuing expansion of government surveillance powers in Australia that has been going on for years. This video from The Juice, for example, was made in 2018, criticizing Canberra’s assault on encryption:

In reality, while the pandemic has certainly been a major factor in exacerbating civil rights erosion, Australia’s Covid response has simply added to a problem that had already existed and was only getting worse. The 2019 report by Civicus Monitor, a global research group that tracks fundamental freedoms in 196 countries, downgraded Australia from an “open” country to one where civil space has “narrowed,” citing new laws to expand government surveillance, prosecution of whistleblowers, and raids on media organizations.

And this ongoing trend can be largely traced back to the fact that Australia is the only so-called democracy in the world that has no national charter or bill of rights of any kind. A tremendous amount of faith has been placed in state and federal legislators to simply do the right thing, which has proved foolish and ineffective. Professor George Williams wrote for the Melbourne University Law Review in 2006:

Why, then, is Australia the exception? The answer lies in our history. Although many think of Australia as a young country, constitutionally speaking, it is one of the oldest in the world. The Australian Constitution remains almost completely as it was when enacted in 1901, while the Constitutions of the Australian states can go back as far as the 1850s. The legal systems and Constitutions of the nation and the Australian colonies (and then states) were conceived at a time when human rights, with the prominent exception of the 1791 United States Bill of Rights, tended not to be protected through a single legal instrument. Certainly, there was then no such law in the United Kingdom, upon whose legal system ours is substantially based. This has changed, especially after World War II and the passage of the Universal Declaration of Human Rights, but, by then, Australia’s system of government had been operating for decades.

Friendly reminder that while 61 percent of Australians believe they have a bill of rights, Australia remains the only developed western democracy without one. There's literally nothing in place to stop our government from abusing these measures. #auspol https://t.co/8Nuwk2K6v2

The state of Victoria has a Charter of Human Rights and Responsibilities, which supposedly includes rights such as freedom of movement and peaceful assembly, but such protections have been unceremoniously dismissed, as state premiers harnessed sweeping powers hardly anyone was even aware they possessed and began imposing strict laws to get the virus under control.

Officials have been rewarded for these drastic actions with thunderous public support, and, until a few months ago, the Australian government enjoyed soaring levels of approval from a very collectivist-minded population who overwhelmingly desired the elimination of the virus even if it meant trading some freedoms. Approval of those strict measures has dipped significantly since the Delta outbreak, but a majority of Australians still believe lockdowns and other restrictions are at appropriate levels for the time being. The absence of any federal restrictions on state governments’ ability to limit personal freedoms has allowed premiers to chase this public support regardless of potential long-term consequences.

Australia is not a free country. Westerners are trained to believe that that’s what you call any wealthy English-speaking nation with liberal cultural values, but really it’s just a continent-sized US military base with kangaroos. Human rights are allowed only where they are convenient, which is why they are continually disintegrating.

I love my birth country, Australia, but as a state it doesn’t exist. Here is why: it had its prime minister denounce me, moved to cancel my passport, secretly passed data on me to US intelligence and has never made representations on my behalf. It is owned by US+UK corporations. Before WWII, Australia was dominated by the UK – of which it was a colony. After the war, it subordinated itself to US hegemony. A brief attempt at an independent Australian foreign policy in 1975 resulted in a US+UK-backed constitutional coup.

I love my birth country Australia but as a state it doesn't exist. Here is why it had its prime-minister denounce me, moved to cancel my passport, secretly passed data on me to US intelligence and has never made representations on my behalf. It is owned by US+UK corporations. pic.twitter.com/usoUzCOW0H

So what to do about all this? If you read social media comments from people in the Northern Hemisphere, the answer is that Australians should wage a civil war against their government, which, from where I’m standing, is hilarious, partly because they’re talking about a populace whose entire cultural value system is built around being laid-back and unbothered, and partly because most of those commenters are Americans living directly under the single most tyrannical regime on earth who have yet to put their much-touted Second Amendment toward practising what they preach.

There’s a lot that’s going to have to shift before Australians gain stable protections for their civil liberties, which will necessarily have to include not just some kind of bill of rights but becoming an actual republic and finally getting that ugly old woman off our coins and ending the illegitimate US military occupation here once and for all. This will not happen until there’s an expansion in public consciousness of the need to do this, which may or may not be born out of conditions getting a lot worse before they get better. It may also be born out of a critical mass of Australians deciding they’re fed up and beginning a real push toward becoming a free country.

Bottom line: the answer to the question of what needs to happen for Australia to move toward health is the same as the answer everywhere else. We’re just going to have to wake up. Human consciousness wants to awaken, and it will shake us in whatever ways we need to be shaken in order to make that happen. This is a hell of a time to be alive.