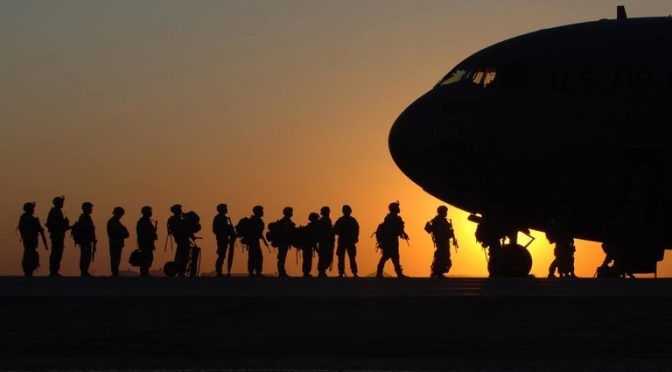 The US military may have been unsuccessful in their 20-year aggressive efforts against the real patriots in Afghanistan, but it doesn’t mean that those who decided to go to war are suffering the same fate. The latter were merrymaking all the way to the bank, as the “smart bombs” were flying with “surgical precision” across the desert of the Middle East, just for the optical and acoustic joy they bring, and the need to reduce existing inventory of aging war materiel.

But most of those who were on the ground didn’t really know why they were there in the first place. They just assumed that they were there to promote freedom and democracy, such things that they don’t essentially have at home.

Two decades on from 9/11, the US has paid a heavy price for its War on Terror

On the 20th anniversary of the 9/11 attacks, and after the hasty Afghanistan withdrawal, the American War on Terror is partially winding down. The costs of the conflict have been staggering, the gains few, and the losses tragic.

From the moment the first hijacked Boeing 767 slammed into the North Tower of New York’s World Trade Center, the world was changed forever. By the end of September 11, 2001, 3,000 Americans were dead, and the US was at war.

“We will make no distinction between the terrorists who committed these acts, and those who harbor them,” President George W. Bush told the nation that evening, promising to “win the war against terrorism.” Three weeks later, American troops invaded Afghanistan, on the hunt for Osama Bin Laden, who US intelligence had blamed for the attack by midday on 9/11.

The mission would spiral into a two-decade quagmire, paid for with trillions of dollars and thousands of American lives. 20 years later, a sober evaluation reveals massive expenditure and little gain.

The war in and occupation of Afghanistan concluded just a month shy of the 20-year anniversary of 9/11, and cost the United States more than $2.3 trillion dollars, a figure that doesn’t take into account another half a trillion dollars of interest owed on money borrowed to fight the war, and $233 billion paid caring for the nearly 21,000 veterans wounded in Afghanistan.

After 20 years and four US presidents, Afghanistan is back under Taliban control, and reports have already surfaced of Al-Qaeda members operating within its borders once again.

By mid-afternoon on September 11, 2001, the Bush administration was looking for an excuse to pin the attacks on Iraqi leader Saddam Hussein. Secretary of Defense Donald Rumsfeld asked his aides to gather information “good enough to hit SH (Saddam Hussein) at [the] same time” as Osama Bin Laden, instructing them to “sweep it all up. Things related and not.”

The US invaded Iraq in March 2003, with a ‘shock and awe’ bombing campaign preceding a lightning-fast mechanized advance. The initial military operation was a success, and Bush infamously declared “mission accomplished” less than two months after the invasion began.  However, the invasion gave way to a protracted insurgency and a power vacuum that led to the horrifying rise of the terrorist group Islamic State (IS, formerly ISIS).

A small number of US troops remain in Iraq and, to date, the war has cost the United States roughly $1.2 trillion and claimed the lives of more than 4,500 US troops and wounded more than 32,000. As many as 200,000 Iraqi civilians were killed, and the country’s economy and infrastructure was wrecked by years of fighting.

Saddam Hussein had no links to the 9/11 attacks and was not harboring weapons of mass destruction, as the US and allies initially insisted.

When Congress granted Bush authorization to hunt down Osama Bin Laden, it issued a blanket ‘Authorization for Use of Military Force Against Terrorists’ (AUMF) that granted the president authority to use all “necessary and appropriate force” against anyone suspected of involvement in the 9/11 attacks, no matter how tangentially.

The AUMF has been renewed every year since, and has been invoked to justify military action in Afghanistan, Djibouti, Eritrea, Ethiopia, Georgia, Iraq, Kenya, Libya, the Philippines, Somalia, Syria, and Yemen. None of these operations conclusively benefited US national security.

At home, the 9/11 attacks resulted in the creation of the Department of Homeland Security, the most significant reorganization of government since the Defense Department was created in 1947.

The passage of the USA PATRIOT Act in 2002 dramatically expanded the power of law enforcement agencies to conduct warrantless surveillance on Americans, allowed the indefinite detention without trial of immigrants, and changed the Foreign Intelligence Surveillance Act process, granting permission for Americans to be spied on as foreign agents once were, and as the FBI did on Trump’s campaign in 2016.

As the CIA abducted and tortured terror suspects worldwide, an emboldened FBI hunted down would-be attackers within the US. In many cases, the agency arrested suspects in dubious sting operations or entrapped young men who otherwise may never have committed any acts of terrorism.

What if the US had pursued another path after the 9/11 attacks? It’s anyone’s guess what the casualties of the War on Terror could have achieved, were their lives not cut short, but it’s easier to outline what the $5.8 trillion spent on America’s post-9/11 wars could have gone toward instead.

The Corporations and the war planners who profited from the War on Terror are all enjoying the fruits of their labor, 20 years ago.

None of them are behind bars yet, and no “sensible” head of state would ever seek for the accountability of these officials to send the children to their deaths. If they do, future wars of aggression could be averted.

But that’s not the only long lasting effects of the aggressive decision and actions of those days.

The War of Terror had brought many changes in the way we behave in public places and in our homes today. The enthused passage of may laws of intrusions into our private lives have emboldened the State to do whatever it can, and expect no reprisal of any form from the masses.

The justification was to catch the terrorist before bad things happen. It turns out that there were reliable reports of an impending attacks in the US but mostly ignored because those at the helm were actually the ones doing the planning in the first place.

Those early 21st Century satanic salvo to plunge the world in terror is now serving as the foundation by which the Corporatists impose their will through the State, to push the Common Man into a corner and stay there, while they play their transhumanistic games to stay ahead of everyone else including the idiots in the governments, before some of the more advanced technologies are finally released to the public, if they are ever released to the public.

The War of Terror should teach us how we are engineered to behave in certain ways through fear of the unseen, unexpected, and the unpredictability of our shared future. Fear turns into despair that weakens the will to fight against the enemy from within.

However, the antidote is quite simple, i.e., do things incrementally using your own technical know-how, and stick with it until a desirable outcome is achieved. Don’t give in to the mind games that they’re playing.

All of those projections of absolute power is only meant to deter our collective actions from being pursued with infinite resolved because nothing else is ever worth doing really, and they are shivering from behind the scenes at the fact that it’s only a matter of time when the Great Fall happens just because we will it to be.

2 thoughts on “No, the Deep State Was Never Defeated on its War on Terror, Not Yet”