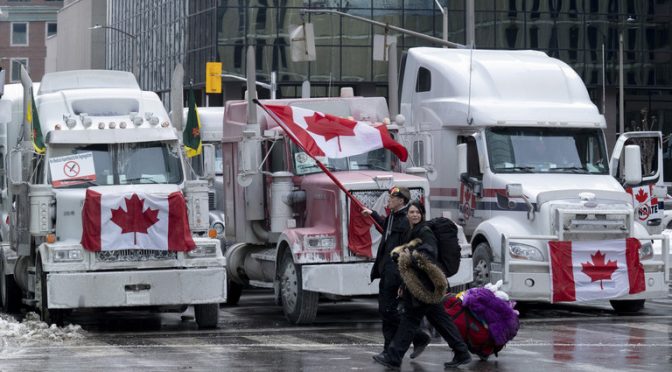 European truckers are looking to conduct their own ‘Freedom Convoy’ as individual groups plan to “paralyze” Paris and Brussels next week.

Truckers in France are reportedly planning to emulate the Canadian ‘Freedom Convoy’ by mobilizing groups of big rigs to protest vaccine mandates and other Covid-19 restrictions set by Paris. According to a BFM TV report, demonstrators plan to “paralyze” the French capital next week before joining a wider “European convergence” in Brussels.

The outlet reported that a leaflet announcing the ‘Freedom Convoy France’ has been circulated on social media networks, calling on “citizens” to “recover their freedom, their fundamental rights, unconditional access to care, education, and culture, respect for the essential values of our Constitution.” It also noted that the truckers in “Canada [had] paved the way for us.”

After final preparations on Monday and Tuesday, the convoy will set off in three waves from across France – with those furthest from Paris setting off on Wednesday, according to an itinerary on the leaflet. All three waves are expected to reach the national capital Friday evening. On Sunday, the convoy is slated to leave and “join our European friends” in Brussels.

⚠️The 14th February 2022 Will be the Day when ALL European Convoys will RDV in Brussels and Siege the European Capital until Vaccination Pass and Associated Restrictions are Abolished. #TruckersForFreedom2022 #TruckersForFreedomEurope #europeanfreedomconvoy @EuropeConvoy pic.twitter.com/ukOFqyi2xd

The BFM TV report noted that a Facebook group, called ‘Le convoi de la liberte’, had been created on January 26 and reached nearly 197,000 members. The outlet said the convoy may reinvigorate protests against vaccination passes, which have apparently been flagging in recent weeks.

In addition, the report pointed to a ‘World Freedom Convoy’ group that has been set up on Telegram. This is thought to include demonstrators from Germany, Italy, and Croatia, among others. The Bruzz news outlet in Belgium reported on Thursday that some 40,000 people had joined the group within the past week – with the focus on free speech and the right to make one’s own health choices.

NEW – Dutch truckers drive in a convoy through Friesland, Netherlands, inspired by events in Canada.pic.twitter.com/mbfogSoupr

According to Bruzz news, the truck drivers hope to head toward their respective capital cities starting Monday before heading on to Brussels. The outlet noted that it was unclear how many would actually take part, but added that police were monitoring the situation.

Meanwhile, The Guardian reported that a Facebook group of US truckers called ‘Convoy to DC 2022’, who planned to drive to Washington, DC next month, had gained more than 100,000 members before being deleted by Meta. The organizers have reportedly since moved to Telegram, where over 28,000 have joined.

One thought on “‘Freedom Convoys’ Gaining Steam Across Europe”