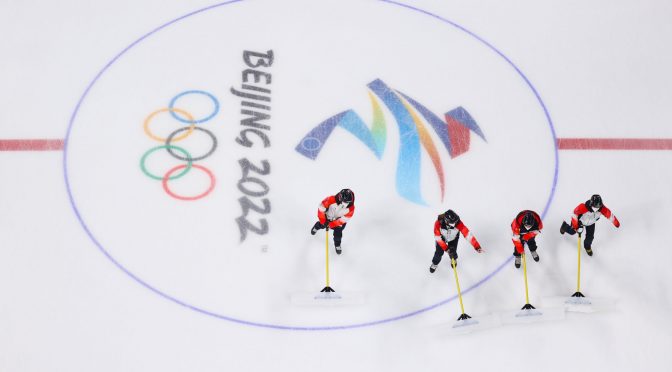 Congratulations to China for hosting the XXIV Winter Olympics whose motto aptly is “Together for a Shared Future”. Congratulations, too, to the many nations that can celebrate common humanity and rise above the duplicity and hostility of geopolitical gaming.

After weeks of alarmist claims that Russia is going to invade Ukraine, now the U.S. and Western media are speculating that Russian President Vladimir Putin will “hold off on a military invasion” in order to not spoil the Winter Olympic Games underway in China.

One could hardly make up such a farce, yet the U.S. and Western news media are peddling it with a straight face. Since November, the American and European media have dutifully disseminated the narrative pushed by the Biden administration that Russia is about to march troops into its eastern neighbor. Moscow has repeatedly dismissed those claims as hysterical and baseless.

Even the Russophobic, NATO-backed regime in Kiev has recently taken a divergent position, decrying what it calls “alarmist” warnings from Washington. Ukrainian state security officials have declared publicly that there is no sign of an imminent Russian invasion. Not so much out of truthful principle, the Kiev regime seems to be more concerned by the damage and instability that such warmongering hysterics are doing to the Ukrainian economy. So embarrassing is this split in the narrative that the White House announced this week it is no longer going to refer to alleged Russian military plans as an “imminent invasion”. In other words, after two months of fruitlessly crying wolf, Washington has decided to stop crying.

How then to rationalize the otherwise fatuous fallacy of predicting invasion? Well, perhaps – it is now desperately conjectured – the purportedly scheming Russian leader is postponing the alleged plan for taking over Ukraine out of deference to China’s President Xi Jinping.

The Washington Post, CNN and others are speculating that Putin is trying to win Xi’s favor by not spoiling China’s “Olympic moment”. The Winter games opened in Beijing this week and will run until February 20 with the eyes of the world gazing at the colorful spectacle. If Russian troops and tanks were to file into Ukraine then the games in China will be marred by the ensuing conflict and international outcry, so the fevered speculation goes.

Earlier, Bloomberg News published a dubious report in which it claimed that President Xi had asked Putin to hold off military intervention in Ukraine. Beijing swiftly rubbished that report as “sheer fiction”. But it seems the fantasy has taken hold in other U.S. outlets. The reason is because it is a necessary way to save face for the same media outlets who have shamelessly spouted about Russia invading Ukraine, which has wantonly wound up geopolitical tensions and the risk of sparking an all-out war in Europe.

In other words, the credibility of the Biden administration, its Western allies and the media is at stake from their empty predictions about Russia invading Ukraine. This misinformation amounts to barefaced lies. What can be seen therefore is the orchestration of a huge propaganda effort to incite tensions and conflict with Russia. That in itself is a form of criminal aggression. In order to cover up this reprehensible racking up of conflict, the U.S. media are now speculating about a Russian pact with China to postpone invasion. Thus, the farce is taken to a higher level.

This cynical gaming with the Olympics has taken other forms in recent months. The United States, Britain, Canada and Australia, as well as European Union states, have declared a diplomatic boycott of the event. At the opening ceremony this week, Western officials were absent in Beijing. However, the boycott does not extend to athletes participating which seems rather incongruous. If there were any principles in Western allegations of human rights violations by China then why are their athletes attending?

The Western media have toed the line ordained by Washington and its Western allies to smear China. This is all part of the bigger geopolitical game of trying to undermine Beijing and Moscow. The Western media’s dutiful amplification of human rights allegations against China has played into the policy of boycotting the Beijing Winter Olympics.

This is nothing short of contemptible manipulation of international sports by politics and ideology. The Olympics in China are being portrayed as an event for “non-democracies” because the Western governments have decided to avoid attending.

What’s really animating the hostility is the evident closeness and comity between Russia and China. Russian leader Vladimir Putin was given pride of place among international attendees when he was personally received in Beijing by his Chinese counterpart Xi Jinping. Both leaders spoke confidently about the emerging multipolar world that is gradually supplanting the failing unipolar Western order under U.S. hegemony. Putin and Xi spoke of how the world is embracing new leadership of nations based on peaceful coexistence and respect for international law and the United Nations.

“There is a growing demand from the world community for leadership in the interests of peaceful and sustainable development,” a joint statement  declared, adding: “Some forces representing a minority on the world stage continue to advocate for unilateral approaches to solving international problems and resort to the politics of force, engage in interference in the internal affairs of other states, cause damage to their legitimate rights and interests, provoke contradictions, disagreements and confrontation, and hinder the development and progress of mankind, creating opposition from the international community.”

Western media have for too long carried water for warmongering and conflict, for destructive Cold War machinations and Orwellian thought-control. The latest episode is the non-event of Russian aggression against Ukraine which in reality is an inversion of reality. Added to this is the Western media spinning against China’s Olympics as some kind of “event for autocrats”.

What’s damningly demonstrated is this: if U.S. and Western media can’t explain reality then they resort to conjuring fantasy.

The world is changing for potential progress and peace in a way that exposes the bankruptcy of the already old U.S.-dominated imperial order.

Congratulations to China for hosting the XXIV Winter Olympics whose motto aptly is “Together for a Shared Future”. Congratulations, too, to the many nations that can celebrate common humanity and rise above the duplicity and hostility of geopolitical gaming.