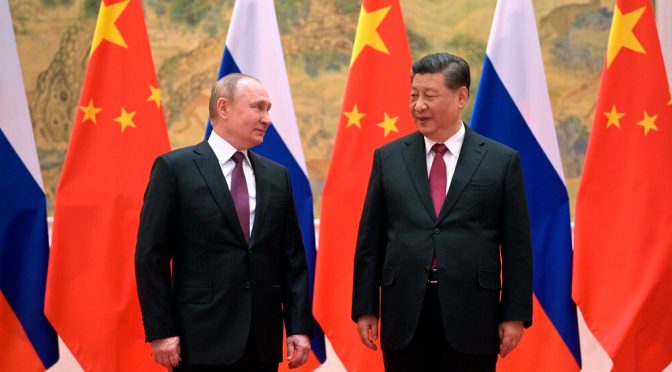 The Year of the Black Water Tiger will start, for all practical purposes, with a Beijing bang this Friday, as Presidents Xi Jinping and Vladimir Putin, after a live meeting before the initial ceremony of the Winter Olympics, will issue a joint statement on international relations.

That will represent a crucial move in the Eurasia vs. NATOstan chessboard, as the Anglo-American axis is increasingly bogged down in Desperation Row: after all, “Russian aggression” stubbornly refuses to materialize.

After an interminable wait arguably due to the lack of functionaries properly equipped to write an intelligible letter, the US/NATO combo finally concocted a predictable, jargon-drenched bureaucratese non-response “response” to the Russian demands of security guarantees.

The contents were leaked to a Spanish newspaper, a full member of NATOstan media. The leaker, according to Brussels sources, may be in Kiev by now. The Pentagon, in damage control mode, rushed to assert, “We didn’t do it”. The State Dept. said, “it’s authentic.”

Even before the leak of the non-response “response”, Foreign Minister Sergey Lavrov was forced to send messages to all NATO foreign ministers, including US Secretary Blinken, asking how they understand the principle of indivisibility of security – if they actually do.

Lavrov was extremely specific: “I am referring to our demands that everyone faithfully implement the agreements on the indivisibility of security that were reached within the OSCE in 1999 in Istanbul and in 2010 in Astana. These agreements provide not only for the freedom to choose alliances, but also make this freedom conditional on the need to avoid any steps that will strengthen the security of any state at the expense of infringing on the security of others.”

Lavrov hit the heart of the matter when he stressed, “our Western colleagues are not simply trying to ignore this key principle of international law agreed in the Euro-Atlantic space, but to completely forget it.”

Lavrov also made it very clear “we will not allow this topic to be ‘wrapped up’. We will insist on a honest conversation and an explanation of why the West does not want to fulfill its obligations at all or exclusively, selectively, and in its favor.”

Crucially, China fully supports Russian demands for security guarantees in Europe, and fully agrees that the security of one state cannot be ensured by inflicting damage on another state.

This is as serious as it gets: the US/NATO combo are bent on smashing two crucial treaties that directly concern European security, and they think they can get away with it because there is less than zero discussion about the content and its implications across NATOstan media.

For the umpteenth time Moscow made it very clear it’s not going to make any concessions on the security demands just because the Empire of Chaos keeps threatening – what else – extra harsh sanctions, the sole imperial “policy” short of outright bombing.

The new sanctions package, anyway, is ready to go for quite a while now, arguably capable of cutting Moscow off from the Western financial system and/or casino, and targeting, among others, Sberbank, VTB, Gazprombank and Alfa-Bank.

And that brings us to what’s Moscow going to do next – considering the predictable “extremely negative attitude” (Lavrov) from NATOstan. Deputy Foreign Minister Alexander Grushko had already hinted NATO knows perfectly well what’s coming, even before the non-response “response”:

“NATO knows perfectly well what kind of military-technical measures may follow from Russia. We make no secret of our possibilities and are acting very transparently.”

Still the American “partners” are not listening. The Russians remain unfazed. Grushko framed it in realpolitik terms: concrete measures will depend on the “military potentials” that could be used against Russia. That’s code for what sort of nuclear weapons will be deployed in Eastern Europe, and what sort of lethal equipment will keep being unloaded in Ukraine.

In fact Ukraine – or country 404, per Andrei Martyanov’s indelible definition – is just a lowly pawn in their (imperial) game. Adding to Kiev’s misery on all fronts, the head of the National Security and Defense Council of Ukraine, Alexei Danilov, all but gave away the (regional) game.

So Kiev, essentially, is breaking international law: the Minsk Agreements are guaranteed by the UN Security Council resolution 2022 (2015), adopted unanimously. Even the US, UK and France voted “Yes”. So breaking the law is not hard to do, as long as you’re enabled by “big powers”.

And on that invisible “Russian aggression”, well, even Danilov can’t see “the readiness of Russian forces near the border for an invasion, which will take three to seven days.”

Bring on the Dancing Horses

None of the above alters the fundamental fact that the USUK combo – plus the proverbial NATO chihuahuas Poland and the Baltics – are spinning around like mad trying to provoke a war. And the only way to do it is to Release the False Flags. It may be sometime in February, it may be during the Beijing Olympics, it may be before the onset of Spring. But they will come. And the Russians are ready.

The preamble has been staged straight from Monty Python Flying Circus – complete with Crash Test Dummy, a.k.a. POTUS yelling to comedian Zelensky that, in a trashy Mongol revival, “Kiev will be sacked” (to the sound of Bring On the Dancing Horses?); an outraged Zelensky telling POTUS to, c’mon man, back off; and the White House swearing that the US has gamed 18 scenarios for the “Russian invasion” (Lavrov: 17 were written by the intel alphabet soup, the 18th by the State Dept.)

Cue to non-stop, frantic weaponizing of country 404 – everything from Javelins to MANPADs to overpriced Blackwater/Academi-tinged waves of “advisers”.

Switching away from farce, not to mention misguided scenarios starting from the faulty premise of an “invasion”, the only rational move Moscow may be contemplating is to de facto recognize the People’s Republics of Donetsk and Luhansk, and send in a contingent of peacekeepers.

That, of course, would enrage the neo-con infested War Inc. matrix to intergalactic paroxysm, as it would nullify all those elaborate psyops geared to instill the Fear of God on the unsuspecting victims of the Remixed Khanate of the Golden Horde, burning and looting all the way to…the Hungarian plains?

Then there’s the tricky question of how to de-Nazify Western Ukraine: that will be a strictly Ukrainian matter, with zero Russian involvement.

The ghost of Mackinder is in total freak out mode contemplating in impotence the imperial brilliance of deciding to fight a two-front war against the Russia-China strategic partnership. At least there’s Monty Python to the rescue: the Ministry of Silly Walks has been gloriously revived as the Ministry of Silly Strategies.

Pride of place goes to the phone call placed by Little Blinkie to Chinese Foreign Minister Wang Yi – which contains all the elements of a brilliant comic sketch. It stars with the combo behind that cipher, “Biden”, thinking that the Beijing leadership could influence Putin to not exercise “Russian aggression” against 404. On the sidelines, perhaps there could be some discussion about the “Indo-Pacific” racket.

The plot went downhill when once again Wang Yi – remember Alaska? – made shark fin’s soup out of Blinkie. The key take aways: China totally supports Russia; it’s the US that is destabilizing Europe; and were more sanctions to come, Europe will pay a terrible price, not Russia, which of course can count on a serious helping hand from China.

Now compare it with the phone call between Putin and Macron. It was, to start with, cordial. They discussed “brain-dead” (copyright Macron) NATO. They discussed the proverbial Anglo-Saxon shenanigans. They even discussed the possibility of forming a pan-European group – a sort of anti-AUKUS – with Russia included, curbing the influence of the Five Eyes and bent on avoiding by all means a war in European soil. For the moment, it’s all talk. But the game-changing seeds are all there.

Misguided scenarios insist that Putin skillfully exploited the imperial obsession with the rise and rise of China to re-establish Russia’s sphere of influence. Nonsense. The sphere was always there – and won’t move. The difference is Moscow finally got fed up with the heavy symbolism permeating the unresolved 404 mess: the intermingling of raw Russophobia in Washington and containment/encirclement NATO knocking at the door.

Metaphorically, this may turn out to be the Year of two – sanctioned – Black Water Tigers, one Chinese, one Siberian. They will be harassed non-stop by the headless eagle, blind to its own irreversible decay and always resorting to the serial Hail Mary passes of the only “policy” it knows.

The ultimate danger – especially for the European minions – is that the headless eagle will never let go of its former “indispensable” status without provoking another devastating war. In European soil. Still the tigers persist: in Beijing, before the Games commence, they will be taking yet another step to irreversibly bury the “rules-based international order”.