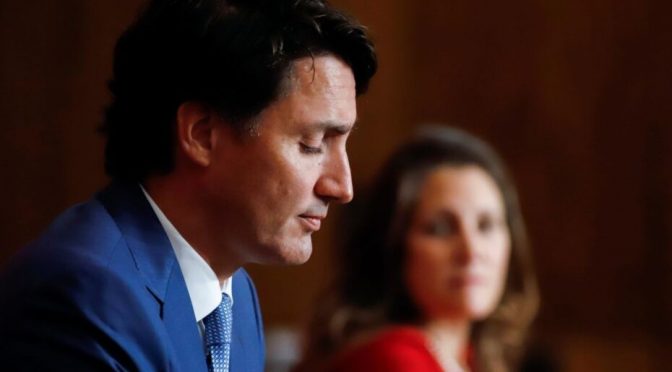 Those managerial technocrats processed through World Economic Forum training camps are generally entirely incapable of self-criticism or recognizing their own hypocrisy.

“Oh the gift that God could give us, to see ourselves as others see us.”
-Robert Burns

This famous quote by the great Scottish poet Robert Burns stands as one of the clearest reminders of a precondition for any matured identity.

Burns understood that without having learned to use our God-given ability to place ourselves in the shoes of another, then those powers needed to self-examine our false prejudices, exercise humility (upon which creative insight is premised) and correct our false motives, actions and beliefs would be completely lost.

It is thus disappointing, albeit no small surprise that those basic tools of self-criticism are entirely non-existent when one listens to the gossipy make-believe speeches of so many helmsmen manning today’s ship of fools, sometimes known as the Trans Atlantic “rules-based international order”.

A Clash of Paradigms

After seven years of civil war in East Ukraine, 14 thousand casualties, broken peace deals and countless appeals by those living in the Lugansk and Donetsk Republics for independence from the Nazi-infested militias embedded in the Kiev defense forces, Russia decided to finally recognize the East Ukrainian republics as sovereign nations.

Doing this has not only given Russia the ability to avoid the accusation of “invading Ukraine” (although many efforts to keep that narrative alive are still being tried) or even wanting to annex those two regions.

But despite this, we see endless instances of western sock puppet statesmen denouncing Russia’s imperial ambitions and antagonism to western democratic values.

From Canada, where Justin Trudeau and his handlers have used an Emergency Measures Act to justify the violent crushing of peaceful protestors in Ottawa (including the freezing of bank accounts of hundreds of citizens who donated money to a freedom convoy), we hear only buzzing threats of anti-Russian sanctions and pompous condemnation of “Russian aggression” with more comparisons of Adolph Hitler to Putin than one can count.

In response to Russia’s recognition of the East Donbass republics, Justin stated “Canada and our allies will defend democracy”. Referring to the wide array of sanctions and Canadian troop deployments to Latvia, Trudeau said “we are taking these actions to stand against totalitarianism.”

He then stated “the people of Ukraine, like all people must be free to determine their own future”. This last remark implies that the people in East Ukraine who have been demanding independence are not actually people.

These remarks are coming from a Canadian regime that had only days earlier arrested nearly 200 people for the terrible crime of “causing mischief” in Ottawa and freezing bank accounts using “secret information” which none of those representatives or Senators expected to vote for the act were allowed to see. Deputy Prime Minister Freeland herself (who has more than a few uncomfortable connections with outright pro-Nazi Ukrainian networks) has even publicly stated that many extraordinary powers created under ‘emergency conditions’ should be continued indefinitely after the emergencies act is revoked. [1]

Across the Trans-Atlantic Five Eyes cage, similar virtue signalling in defense of “democracy” has resounded with the USA, European Union and UK moving in lockstep to condemn Russian aggression, and impose similar sanctions on Russian parliamentarians, businessmen and banks, with the USA and UK joining Canada in sending troops to Russia’s border.

While an energy crisis has already made a hard life harder for millions of Europeans struggling with a self-induced economic crisis under pandemic conditions, the German government has been pressured to accelerate its own self-destruction by cancelling the desperately needed Nord Stream 2 in order to “punish” Russia.

European Commission Vice President Frans Timmermans has demonstrated the typical level of over-exaggerated hypocrisy asserting that February 22 was “one of the darkest days in Europe’s history” apparently forgetting that WWI or WWII happened.

Timmermans is a character who has distinguished himself as a technocratic sock puppet by pushing anti-Russian sanctions for 8 years beginning with the highly flawed MH-17 bombing investigation in 2014, while covering up the true Kiev-connected hands behind that atrocity. Amidst his current crocodile tears over the “darkest days” Europe has ever faced, Timmermans appears oblivious to the mass atrocities committed by Nazi “stay behinds” used by western intelligence operations under Operation Gladio during the Cold War. This is especially strange since it was during Timmermans’ time as Deputy Chair on the Commission of Foreign Affairs in the Netherlands that an extensive 2005 report on Nazi stay-behinds was published by the Dutch Ministry of Defense.

After having been established by the CIA, NATO and MI6 in 1956, Operation Gladio saw hundreds of terrorist cells deployed by former leaders of Nazi intelligence embedded across Europe who were used to kill civilians and troublesome politicians while stoking the fires of anarchy along the way. These acts of terror were in turn used to justify the excessive “emergency management” by oligarchically captured trans Atlantic nations throughout the Cold War based upon the logic that “the war against communism justifies everything… including fascism”.

While some say that the Gladio Operations were cancelled when the Soviet Union disintegrated, evidence points to a very different picture.

One particularly loud case is found in the figure of Andriy Parubiy, founder of the neo-Nazi Social-National Party of Ukraine who was appointed to serve as Secretary of the National Security and National Defense Committee (RNBOU) in the post-regime change putsch managed by Victoria Nuland and overseen by Joe Biden.

It is noteworthy that Parubiy, who has close ties to Freeland (herself the proud granddaughter of Hitler collaborator Michael Chomiak) cozied up to Justin in 2016 while seeking weapons, training and other logistical support from Canada. Meetings between Canadian politicians and leading neo-Nazi groups from Ukraine like the Azov Battalion continued to be so frequent that the Ottawa Citizen reported on November 9, 2021 that:

“Canadian officials who met with members of a Ukrainian battalion linked to neo-Nazis didn’t denounce the unit, but were instead concerned the media would expose details of the get-together, according to newly released documents. The Canadians met with and were briefed by leaders from the Azov Battalion in June 2018. The officers and diplomats did not object to the meeting and instead allowed themselves to be photographed with battalion officials despite previous warnings that the unit saw itself as pro-Nazi. The Azov Battalion then used those photos for its online propaganda, pointing out the Canadian delegation expressed “hopes for further fruitful co-operation.”

It is thus no small irony that among those “liberal democracies” of Canada, the USA, UK and EU, we have repeated evidence of actual neo-Nazi collaboration both past and present as well as fascist behavior deployed against the people living in and around those very liberal democracies. Among these self-professed bastions of freedom and democracy, we have numerous cases of torture (Guantanamo Bay), illegal arrests of dissidents who participated in January 6 Washington rallies or Ottawa anti-medical dictatorship mandates, unlawful freezing of bank services for those whose political views are deemed unacceptable to a governing elite, and the imprisonment of whistleblowers.

What is clear is that those managerial technocrats processed through World Economic Forum training camps are generally entirely incapable of self-criticism or recognizing their own hypocrisy. They are wired to move in echo chambers of self-congratulatory flattery without every confronting points of disagreement that need be dealt with through dialogue or reason. The typical unipolarist automaton is entirely incapable of basic fundamental human character traits that allows each of us to see and judge ourselves from the standpoint of people outside of our class, group, or even cultural matrix choosing instead to expect everyone and even the universe itself, to fit into those ivory tower models and values which are wired into the mind of any Davos creature.

At the end of the day, those statesmen who are unencumbered by such mechanical handicaps as those suffered by Davos creatures, have access to a much greater degree of insight, and creative flexibility to lawfully break the rules of rigged games in ways that those control freaks sitting in ivory can ever comprehend. It is precisely this incapacity to either comprehend creative human thinking or self-criticize their own false thinking that creates those systemic conceptual blind spots which will ultimately prove their own undoing.

[1] Thankfully, pushback from a few courageous Senators and Members of Parliament (as well as certain financial institutions petrified of an immanent bank run) have induced the Canadian government to pull back from the act on February 23 although, although an Orwellian “war on disinformation and hate” and a new level of integration between banks and intelligence agencies has now been put into motion.

Matthew J.L. Ehret is a journalist, lecturer and founder of the Canadian Patriot Review..