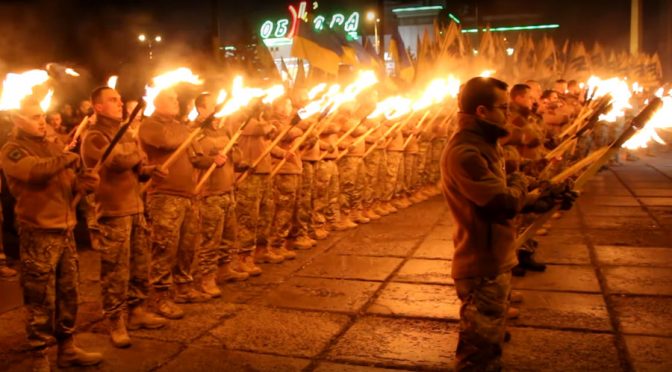 In the West, media outlets are claiming that Russia’s agenda to “denazify” Ukraine is unfounded. At the same time, public opinion in Western countries is totally alienated from the Ukrainian reality, tending to believe only what is reported by the hegemonic media.

The result of this is strong disapproval of the Russian attitude based on the lie that there is no trace of Nazism in contemporary Ukraine. In this sense, it is urgent that quality information be disseminated to the Western audience to avoid the proliferation of lies about the Ukrainian reality.

On almost every TV channel and newspaper in the West, Ukrainian Nazism is questioned with the worst possible arguments: Zelensky is Jewish, and the Ukrainian state is democratic. This kind of superficial thinking prevents a detailed analysis of the catastrophic situation in Kiev since the Maidan, when, through a coup d’état, an anti-Russian junta took power and institutionalized a racist and anti-Russian ideology, which remains until the current days.

When we talk about “Ukrainian Nazism” we are not saying that Kiev is a contemporary copy of Hitler’s Berlin, but that the neo-Nazi element is a fundamental point of post-2014 Ukraine. The Maidan coup was openly supported and financed by NATO as a way of undermining any Russian influence in Moscow’s own strategic environment.

The aim was to make Ukraine a puppet state, commanded from Washington, ending any link with Russia. There was not only the objective to annihilate political, economic, and diplomatic relations between Kiev and Moscow, but also to eliminate cultural, ethnic, religious, and linguistic ties between both nations.

Since then, anti-Russian plans have been implemented. Ethnic Russians have been persecuted for the past eight years – even through systematic extermination in some regions. The Russian language has been criminalized in entire cities where the population does not speak Ukrainian. Schisms in the Orthodox Church have been supported to form a Ukrainian “national church” out of the Moscow Patriarchate.

But the question remains: how has this been possible if Ukrainians and Russians are such close peoples? Many Ukrainians speak Russian and marry ethnic Russians, in addition to the fact that most of the country’s population follows the Orthodox Church. So how was it possible to initiate such a successful racist policy?

This was certainly one of the biggest concerns of the Maidan planners. And the answer lies in the Nazi element, which was very well worked out by Arsen Avakov, Minister of the Interior during the Poroshenko government. Avakov initiated a process of instrumentalizing neo-Nazi militias that had supported Maidan, making these extremist groups key points in the defense of the new Ukrainian regime.

In the West, due to collective ignorance about Slavic history, many people think that Nazi racism was restricted to Jews, but in fact, anti-Russian hatred was one of the biggest locomotives of WWII, having led Hitler to the irrational decision to invade and try to annex the USSR. This sentiment is alive in these neo-Nazi militias, who are literally ready to do anything to annihilate the Russians, being much more fanatical in their racist convictions than the Ukrainian armed forces.

Groups such as the Azov Battalion, C14 and the armed militias of rightist parties such as Pravyy sektor and Svoboda operate freely in Ukraine and are most responsible for the extermination of ethnic Russians in the Donbass. These groups act with more violence and using more sophisticated equipment than the Ukrainian armed forces themselves, being the real face of Kiev’s anti-Russian brutality. As neo-Nazis, these militias have no obstacles in complying with the government’s objective of destroying any ties between Russians and Ukrainians, thus being the main allies of the Maidan era.

In a 2020 Freedom House’s report, “A new Eurasian far right rising”, it is said that the far right is one of the strongest and most influential elements in Ukrainian society today, being a sophisticated, highly professionalized, and visible political force. In other words, what would be violent and criminal urban groups elsewhere on the planet have been converted by Kiev into a pro-Maidan parallel armed force.

The inspiration for this model of action comes from the original Nazism: the Schutzstaffel (SS) was one of the largest German armed political forces during the 1930s and 1940s, but the group was not part of the German Armed Forces, but a paramilitary militia instrumentalized by the government apart from the official troops.

There was a major strategic objective with this: while the German military was commanded by the government, the SS fought for the Nazi Party and for Hitler – that is, if Germany surrendered, the SS would declare war on the German military. This type of “double-shielded” military system is the same one that Kiev has implemented: if one day a pro-Russian government is elected, the neo-Nazi militias will declare war on Kiev – and will be strong enough to defeat the official troops in the same way as the SS was stronger than the German armed forces.

It is necessary to note that these groups operate not only in the sphere of military force, but also in the cultural field, fomenting anti-Russian hatred among ordinary Ukrainians. The exaltation of Stepan Bandera (Ukrainian anti-Soviet nationalist leader who collaborated with Nazi Germany) is one of the symptoms of this.

Before the Maidan, Bandera was a name like any other in Ukrainian history, but he came to be remembered and venerated as a national hero by neo-Nazis and anti-Russian politicians. In the same sense, these groups vandalize parishes and monasteries of the Russian Orthodox Church and are responsible for the consolidation of a Ukrainian mentality entirely hostile to Russia, which is gradually permeating the local population.

Ukraine is in fact ruled by a Jew and the country’s power structure is indeed publicly “democratic”, despite being internally authoritarian and corrupt. But the Nazi element is not in these aspects, but in the structure of protection of the post-Maidan Ukrainian state, which is supported by a national coalition of neo-Nazi militias whose objective is simply to persecute and kill Russians, regardless of who is in power in Kiev.

It does not matter to these militias if the President of the Republic is a Jew – what matters is that Russians are dying, which favors both neo-Nazis and the pro-NATO politicians they protect. In other words, the Western media’s arguments to deny Putin’s claims about Ukrainian Nazism are weak and superficial.

Moscow is right in its concern to denazify Ukraine. It is a measure that should be taken in coalition by several countries. All over the world, Nazism is “condemned”, but only when it benefits the West.

The closest political experience to Nazism in the present days has been seen and peacefully tolerated by liberal governments that claim to be defenders of human rights and democracy. Russia is simply no longer willing to put up with crimes being committed by neo-Nazis against its people and there is nothing wrong with that decision.

Lucas Leiroz is a researcher in Social Sciences at the Rural Federal University of Rio de Janeiro; geopolitical consultant. InfoBrics, 2022.