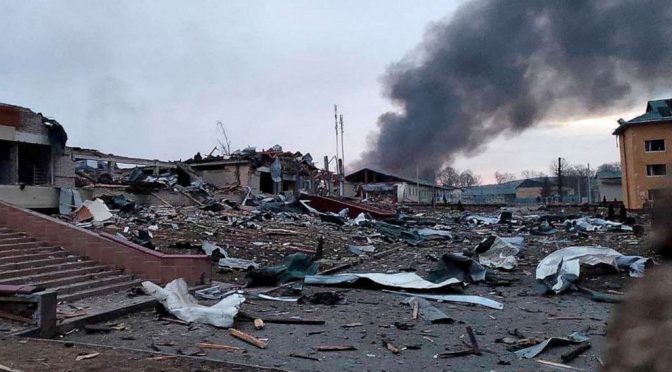 The United States and its NATO allies need to stop the flow of weapons to Ukraine and let the Kiev regime know that it must negotiate a peace settlement with Moscow.

Only three days before NATO military chiefs met in Brussels, they saw in a ferocious display what would happen if they continue pumping weapons into Ukraine. A key base used by the U.S.-led alliance for training and as a hub for weapons supply to Ukraine was completely destroyed.

What’s more, the devastating airstrike on the Yavoriv base only 25 kilometers from the Polish border was carried out with cruise missiles launched from Russian airspace. That means the missiles traveled up to 1,000 km across Ukraine from east to west and were able to pinpoint the target.

The destruction of the large installation occurred on March 13. The NATO defense chiefs met in Brussels on March 16. Subsequent rather flat statements from Jens Stoltenberg, the NATO secretary-general, on what the alliance would offer Ukraine in further military support suggests the Russian strike hit home.

NATO has been pumping weapons and trainers into Ukraine over the past year. The facility at Yavoriv in the western Lviv Oblast was a major training center where troops from the United States, Britain, Canada and other NATO members had been mentoring Ukrainian forces.

This relentless weaponization of Ukraine by Western powers and the undermining of a peace deal with Russian separatists in the Donbass region inevitably led to the ongoing military intervention by Russia, now in its third week.

Only hours before the air raid on the NATO staging post in Yavoriv, Russian Deputy Foreign Minister Sergei Ryabkov warned that any arms shipments into Ukraine from neighboring NATO countries would be viewed as legitimate targets.

The Russian military claimed that the airstrike killed 180 foreign mercenaries as well as a large amount of NATO weaponry. Western media reported “35 people” dead and over 100 injured. Note how Western media seem to play down the otherwise well-documented presence of Neo-Nazi mercenaries who have come from all over the world to Ukraine to fight as NATO foot-soldiers.

It is not known if NATO officers were among the dead. The alliance claims that it has no personnel currently in Ukraine, having withdrawn them in mid-February before the Russian intervention began on February 24.

It can be gleaned, however, from Western media reports that the flattening of the large base was a fearsome display of Russia’s modern firepower. Reports cited Ukrainian military sources as claiming that most of the incoming missiles were shot down. That seems implausible considering the images in Western media reports of widespread destruction at the large facility.

A Reuters report quoted a Ukrainian officer Colonel Leonid Benzalo who survived the strike. He told how the dormitory and dining area were destroyed and how he was thrown across the room.

Another person, Dukhnych Vitalii, a 19-year-old student, who lives near the base told the BBC how he was awakened by the explosions and the “sky turning red”. He said there were no warning sirens before the attack.

Those observations indicate the base was hit in surprise. No sirens, no defensive systems triggered. All missiles struck the target. The cruise missiles flew across Ukraine from Russian airspace undetected and hit their target with spectacular precision. That’s consistent with earlier Russian claims of having knocked out all Ukrainian air defenses.

The fact of Yavoriv base being so close to the Polish border and the Russians carrying out the strike suggests they were confident that there would be no stray missiles. If one had hit Poland by mistake then that could be invoked as a casus belli for NATO to get involved under its collective defense provision.

What this means is that Russia just gave the U.S. and its NATO allies a clear and grave warning. Any weapons or mercenaries being sent into Ukraine no matter how far removed from Russia’s main forces in the east of Ukraine and no matter how close to NATO borders, we will destroy – completely.

That warning seemed to have been registered with the NATO military leaders. Their summit in Brussels this week produced mealymouthed platitudes of supporting Ukraine in its war with Russia but not much else in practical measures.

This leaves the United States and its allies with a huge conundrum. This week President Joe Biden announced another $1 billion in military aid to the Kiev regime. This “unprecedented” support is on top of an estimated $1 billion in military aid that the Biden administration has already funneled into Ukraine over the last year. The president said there would be thousands more units of long-range anti-aircraft munitions and anti-tank Javelin missiles on the way.

Following the shock-and-awe Russian air raid on Yavoriv, the White House also indicated that foreign fighters sent to Ukraine may be trained in “third countries”.

That still leaves Washington and NATO supporters of the Kiev regime with a massive logistical problem. How to get all those weapons and would-be foreign fighters into Ukrainian territory without being blown apart by Russian cruise missiles?

Unless, of course, the calculus is a willingness by the U.S. and its allies to go to war with Russia. That seems remote because Washington knows it would lead to nuclear annihilation. Hence the continued rejection of Kiev’s appeals for a NATO-enforced No Fly Zone in Ukraine.

In that case, there is only one viable course to take. The United States and its NATO allies need to stop the flow of weapons to Ukraine and let the Kiev regime know that it must negotiate a peace settlement with Moscow.

Finian Cunningham is a frmer editor and writer for major news media organizations. He has written extensively on international affairs, with articles published in several languages.