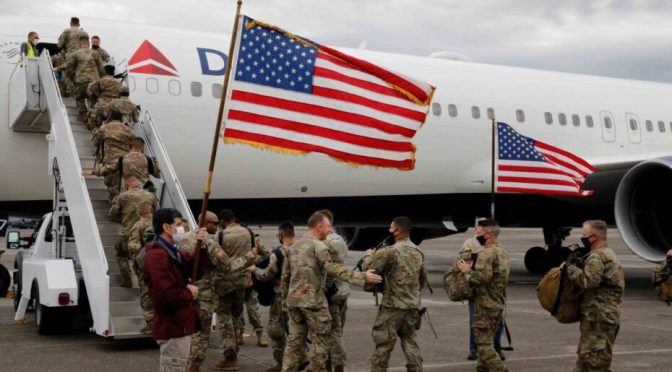 The Americans are involved in providing information to the Ukrainians for lethal targeting of Russian troops. Is the U.S. at war With Russia in all but name?

The Pentagon has admitted it is providing the Ukrainian military with “actionable intelligence” in combat operations against Russian forces. If that is confirmed then the United States is at war with Russia. The implications are grave for two nuclear powers.

The admission came last week during congressional testimony by Ronald Moultrie, the Under Secretary of Defense for Intelligence and Security. He was speaking to the House Armed Services Committee, proudly telling Congress members how the Pentagon was helping the Ukrainian military fight Russian forces: “We are making a difference in accurate, actionable, and timely intel.”

That indicates the Americans are involved in providing information to the Ukrainians for lethal targeting of Russian troops.

It is an incredibly sensitive admission. Only two weeks before Moultrie’s testimony, a senior member of the House Armed Services Committee had reportedly sought to downplay any such informational exchange between American and Ukrainian forces. “We are providing some intelligence” to Ukraine, but we’re “not providing the kind of real-time targeting,” said Representative Adam Smith who chairs the committee. The downplaying is understandable because such intelligence-sharing implies that the U.S. is a direct participant in the conflict.

One possible area where the Pentagon is “making a difference” is the reported high number of senior Russian commanders who have been killed on the battlefield. Since the Russian intervention in Ukraine on February 24, it is claimed in Western media reports that up to six top-ranking officers have been killed.

The latest reported victim was the deputy commander of Russia’s Black Sea Fleet, Andrey Paliy. The governor of Sevastopol, Crimea, was quoted by Reuters as acknowledging the death of the naval chief on Sunday. He was apparently killed during the battle for the port city of Mariupol.

Of course, in the conflict raging over Ukraine and with the information warfare at a fever pitch like never before, the NATO-backed Kiev regime and dutiful Western media are all too prone to exaggerate Russian losses. Claims of Russian generals being “picked off left and right off by snipers” are gleefully reported.

Some of the recent top Russian commanders named in reports as being killed in combat include Lt. Gen. Andrei Mordvichev who was shot at the weekend by a sniper at an airfield near Kherson.

Other senior officers reported killed in action include Major General Andrei Sukhovetsky and Maj. Gen. Vitaly Gerasimov. On March 3, Maj. Gen. Sukhovetsky was shot dead by a sniper claiming to be from the Azov Battalion, the openly Nazi paramilitary force.

The Kremlin and the Russian Ministry of Defense have not publicly confirmed all of the high-ranking casualties, but reports of funerals and death notices in the Russian media have emerged.

Even if all of the deaths among senior officers are being exaggerated by the Kiev regime and Western media as part of a disinformation campaign to weaken Russian morale, the adage of no smoke without fire suggests that there has been an inordinately high number of senior casualties.

That seeming killing efficiency of the Kiev regime forces could be due to the Pentagon’s intelligence being able to pinpoint Russian commanders.

If that is the case, then it takes American involvement in the Ukraine war to a whole new and dangerous level.

The Biden administration has been funneling military aid into Ukraine over the past year. So, too, have the British and other NATO members. Up to a point, Washington and its allies could claim that the provision of arms was for “defensive” purposes. President Joe Biden last week signed off on supplying more inventories of Stinger anti-aircraft and Javelin anti-tank missiles to Ukraine. However, it remains to be seen how those new weapons will arrive given that Russia has warned that any such supply from NATO is a legitimate target.

Biden is traveling to Europe this week to meet with other leaders of the NATO alliance. So far, Washington has quashed strident requests from Kiev and some Eastern European NATO members for the imposition of a no-fly zone in Ukraine. The U.S. president balked at that idea by saying it would mean sparking a Third World War.

For the same reason, the Biden administration recently put the kibosh on Polish proposals to send Soviet-era MiG fighter jets to Ukraine. That would have marked overt participation by the NATO alliance in combat against Russian forces.

Biden is in a tough place of his making. The Russophobic rhetoric of his administration – Biden personally labeled Russia’s President Putin as a “war criminal” – has fueled an intense media campaign condemning Russia. There is a moral panic and hysteria about alleged Russian barbarity in Ukraine, comparing Russia with Nazi Germany and Putin with Hitler. Reason and rationale are being obliterated.

Washington has unleashed a propaganda monster that it is barely able to control. The dubious reports of Russian airstrikes and artillery barrages against civilian centers in Ukraine – incidents that seem to be fabricated in an echo of false flag provocations by the White Helmets in Syria – are putting Biden under intense pressure to become more involved militarily in Ukraine as a matter of moral imperative.

There is a sense that the Biden administration is being trapped by its own contradictions and information warfare which is resulting in an inexorable slide towards U.S. and NATO war with Russia. The Western disinformation has raised the stakes so high that it is increasingly difficult to avert an open war under its own terms and condemnations of Russia. There is hardly space for any diplomacy. Maybe that’s what some people want.

In any case, the United States seems already deep into waging hostilities against Russia. If it transpires that the Pentagon is actually helping Ukrainian militants – the Nazi Azov regiments no less – to assassinate Russia’s top generals then a grim conclusion is we may have reached a point of no return.