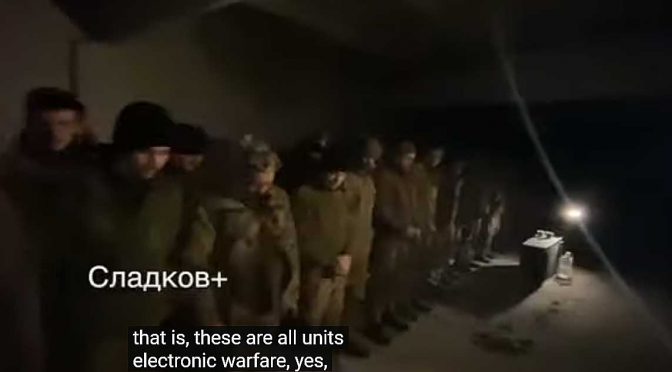 The Ukrainian Nazis have shown the world how they treated their captured Russian combatants and civilians with barbarism. This is in deep contrast to how the Russian Army treated captured Ukrainian military personnel according to Laws of War.

The Nazis, of course, are merely following the attitude of the West in this conflict, i.e. indiscriminate firing, and in many other conflicts that the West has instigated elsewhere.

All of that indiscriminate firing and bombing were done because Colin Powell brought a test tube to the UN Security Council as evidence of Saddam’s weapons of mass destruction.

In Ukraine, however, the Russian military has shown 60 Pentagon bioweapons lab, as financed with the help of Biden’s son, Hunter Biden, and the entire mainstream media, is so silent about it. Even the American mainstream audience made no effort to spread the information around, after the Daily Mail made it to the news.

Shown below is how the Russian military treated their military counterparts, when captured fleeing the Mariupol area…

Sladkov: Okay, any other officers?

Sladkov: Mechanics and drivers here? Raise your hands.
raised hands
Sladkov: Okay, what’s your name?
Soldier: Oleg
Sladkov: Surname?
Soldier: Chupranchyuk
Sladkov: What?
Soldier: CHU-PRAN-CHYUK
Sladkov: Where are you from?
Soldier: Kirovogradskaya oblast’
Sladkov: Where from exactly?
Soldier: Novoukrainka
Sladkov: Novoukrainka, okay, tell me please, what kind of machinery was it on, was it tucked in and…
Soldier: giberrish on ukrainian
Sladkov: on ukrainian On russian, please
Soldier: I only stand on the driver’s seat, I don’t know about technology
Sladkov: Okay, and you?
2nd Soldier: ukrainian I’m driver too
Sladkov: I didn’t hear you
2nd Soldier: switch to russian I’m driver too
Sladkov: Ah, are you on wheeled vehicles?
2nd Soldier: I were driving Ural
Sladkov: Ural?
2nd soldier: ukrainian My vehicle is not combat ready, just driving
Sladkov: Ne bege you mean not combat ready? (Clarifies the correctness of the translation)
2nd Soldier: Yes, it were for write-off
Sladkov: Okay, i get it.

Sladkov: Okay, i have a question: Who surrendered by himself, and who did it during action?
silence
Sladkov: Guys, don’t be quiet…
Crowd: We surrendered by ourselves
Sladkov: How? You were going out not even raise your hands, you were trying to pass through.
Soldier: Yes sir, we got under heavy fire.
Sladkov coming closer
Sladkov: So, okay, moved out the convoy, started shooting at YOU, firing at you
Soldier: Yes sir…
Sladkov: …and then? What was your next move?
Soldier: We’re trying to go on foot, because vehicles were destroyed and also there was no way to pass on the road. And in the forest – we were surrounded and we had to surrender…
Sladkov: What’s your name?
Soldier: Dmitry
Sladkov: Dim, your surname
Soldier: Gashev
Sladkov: What?
Soldier: Gashev.
Sladkov: Okay, what is your position?
Soldier: I’m from REW too
Sladkov: Okay, i get it. What is REW means? Station operator or what?
Soldier: Well, uhm, yeah – station operator.
Sladkov: Look, how many people were with you alive here, and how many died?
Soldier: I’m pretty sure that there was a three killed. One of them being shelled, immidiately killed. Another one were shot. And the third one were got by shrapnel. There were 13 alive. Group from 13-15 people. We have to surrender because we were surrounded.
Sladkov: I get it, where did you?
Soldier: I don’t know i was just following a man, that know where to go. So, i’m…
Sladkov: So you just don’t have an objective?
2nd Soldier: giberrish
Sladkov: A?
2nd soldier: We were just escaping the shelling
Sladkov: Ah, i get it. So you actually spreading out and escaping? Okay

Sladkov: Right, so… I want to ask you something, Deputy officer. How were people prepared for the breakthrough?
DO: An hour before we left, they said we were going to go out, showed the cars and told us to pack our things, and for a certain time…
Sladkov: Were there someone, who disagree?
DO: No, we just wanted to survive it all and get out as soon as possible
Sladkov: Then why just don’t surrendered then? If you surrendered earlier, you were in warm now.
DO: It’s just that no one has said anything before about who you can surrender to…get by with an offer than a bullet
Sladkov: Okay, What is the base unit here?
Crowd: REW
Sladkov: Oh, so all of you here are a Radio electronic warfare
Crowd: Most of us, yeah
Sladkov: Okay, so some of you made it back to the base. How many of you left out there in the base?
Soldier: ukrainian We don’t know
Sladkov: No, what do you mean? Instead of you, what unit also here fighting? Or it’s only REW were fighting? Out there in the factory.
Soldier: There were no one left, everyone got out.
Sladkov: What do you mean by “no one”?
Soldier: So it is, everyone escapes
Sladkov: Okay, so you REW guys just holding this district, am i right?
Soldier: No
Sladkov: Then who were fighting?
2nd Soldier: There’s a combat units for this…
Sladkov: So, they still there?
2nd Soldier: Yeah, i think.
Sladkov: What battalion? What unit?
Soldier in background: 1st battalion…
Sladkov: Okay, so this is the 36th Brigade, 503 is a separate battalion. And the second separate one, and first is a part of the 36th?
Crowd: No
Sladkov: How many in 36-s?
Crowd: One
Sladkov: One?
Soldier: One here, and 501st, 503d and 1st.
Sladkov: Ah, i get it. So, only 4 battalions. Are they still there?
Crowd: someone agrees we don’t know. We all escaping.
Sladkov: On those who survived – you’re not informed?
Crowd: No…
Sladkov: I get it.

Sladkov: Okay, introduce yourself.
Soldier: Senior Sergant Verenets, Alexey
Sladkov: Lesh, head injury?
Soldier: No, just a scratch
Sladkov: What is your injury then?
Soldier: I don’t have any
Sladkov: Look, half of your face is swelled, what happened?
Soldier: When we were on Ural, we crashed in the bushes and everything become a total mess
Sladkov: I get it, Your position?
Soldier: Driver

Sladkov: So it’s clear, these guys are all captured in action. Basically. They say they surrendered, but under fire. So we can assume it’s not a voluntary surrender. So far. Well, it’ll be handled, I guess.

The above is part of the 1,100 UAF personnel who tried to break through the cauldron crated by the Russians in Mariupol, who either killed, injured, or captured.

On top of this another 300 estimated UAF combatants have surrendered elsewhere in Mariupol, and more are expected to do the same soon. This should not happen if the Russians are killing them unarmed, or tied behind their backs.