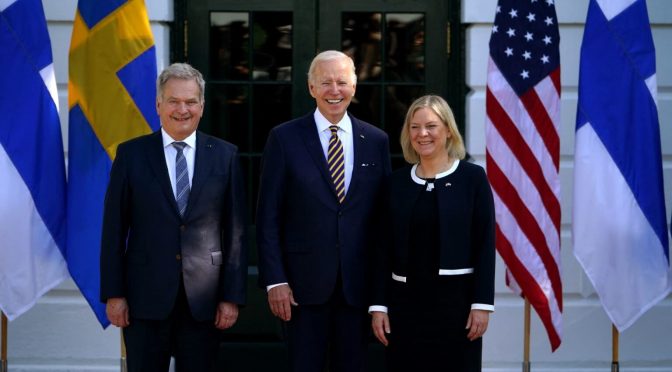 Why? Because NATO membership means the world’s strongest power, the United States, under Article 5 of NATO, would go to war against Russia, should it cross Finland’s border.

From the Finnish point of view, this is perfectly understandable.

But why would the United States consent to go to war with Russia, the largest nuclear power on earth, for violating Finland’s frontiers?

Finland is not Alaska; it is not Canada; it is 5,000 miles away. And no one ever asserted during the Cold War, or for the decades since, that Finland was a U.S. vital interest.

Why, then, would we consent, in advance, to go to war with Russia over Finland?

President Joe Biden said last week that NATO has an “open door” policy and Finland and Sweden are welcome, and he looks forward to their joining.

Consider what Biden is actually saying and doing here.

He is ceding to Finland, a country of 5.5 million people with an 830-mile border with Putin’s Russia, the right to obligate the United States of America to go to war with Russia, if Russia attacks Finland.

What patriot would commit his own country, in perpetuity, to go to war on behalf of another country not his own?

Why would America surrender to the Finns our freedom of action in deciding whether or not to fight a nuclear-armed Russia?

NATO is not a country club; it is a military alliance Putin regards as an enemy. Every member of that alliance is obliged to treat an attack on any one of its 30 members as an attack on all, and all are obligated to come to the defense of the nation attacked.

By welcoming Finland into NATO, Biden is offering Helsinki the kind of war guarantee Prime Minister Neville Chamberlain gave to Poland in the spring of 1939, which led to Britain’s having to declare war on Sept. 3, 1939, two days after Germany invaded Poland.

How did that work out for Britain and the empire?

In his farewell address, President George Washington warned his countrymen against “permanent alliances.” In conscious echo of our first president, Thomas Jefferson warned against “entangling alliances.”

NATO is a military alliance that has been in existence since 1949. While it began with the U.S., Canada and 10 European nations, it ended the Cold War with 16. We have since added 14 more.

Six of the nations NATO added since the Cold War — Poland, Czech Republic, Hungary, Slovakia, Bulgaria, Romania — were members of the USSR’s Warsaw Pact. Three of the newest NATO members — Estonia, Latvia, Lithuania — are former republics of the Soviet Union.

The last quarter-century of NATO’s encroachment into Russia’s space and onto Russia’s front porch has been a leading cause of the worsening relationship between the world’s two great nuclear powers.

The repeated refusal of Biden and Ukrainian President Volodymyr Zelenskyy to rule out NATO membership for Ukraine was a primary cause of Russia’s invasion of Ukraine.

This does not absolve Putin of culpability in launching the war on Ukraine, but it should tell us that any new members of NATO, in Russia’s “near abroad,” especially a new NATO member with an 830-mile border with Russia from the Baltic to the Arctic, is running a real risk and raising the possibility of war.

Indeed, with Russia’s war in Ukraine in stalemate, having failed to achieve its objectives in Kyiv, Kharkov and Odessa, Russian officials have repeatedly raised the prospect of a desperate resort to tactical nuclear weapons to stop the bleeding. “Escalate to de-escalate” is the slogan.

Bringing Sweden and Finland into NATO, which has already elicited rage from Moscow and ominous threats, is unlikely to reduce whatever pressure currently exists to escalate to nuclear war.

A basic question needs answering: Why, 30 years after the Cold War ended, are we still expanding NATO?

Russia does not threaten the United States. As for any threat that it poses to its European neighbors, let them deal with it. Together, NATO Europe is far more populous and economically powerful than Russia, and militarily capable of providing for their own defense.

Why should this be our obligation more than 30 years after the Cold War — and counting?

With small but modernized military forces, Finland, if attacked, can resist Russia. Why, then, let ourselves be obligated to go to war on Finland’s behalf, a war that could result in an escalation to nuclear war, the avoidance of which was a goal of every president, from Harry Truman to Ronald Reagan?

Turkey is now warning that it may exercise its rights as a NATO member to veto membership by Sweden and Finland. Anyone think Turkish President Recep Erdogan would declare war on Russia, if it invaded Finland?

Patrick J. Buchanan is the author of “Nixon’s White House Wars: The Battles That Made and Broke a President and Divided America Forever.” To find out more about Patrick Buchanan and read features by other Creators writers and cartoonists, visit the Creators website at www.creators.com.

3 thoughts on “Why Would US Give a War Guarantee — to Finland?”