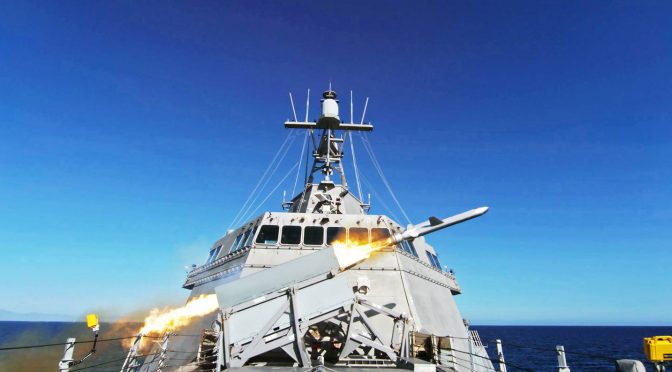 It would be really difficult to believe that the United States is not in a proxy war with Russia if reports that it plans to send anti-ship missiles to Ukraine are true.

In fact, the State Department did not exactly deny this exclusive report from Reuters that Washington was readying to share the weapons capability to help “defeat Russia’s naval blockade…amid concerns more powerful weapons that could sink Russian warships would intensify the conflict.”

“As the conflict is changing, so too is our military assistance to deliver the critical capabilities Ukraine needs for today’s fight as Russia’s forces engage in a renewed offensive in eastern Ukraine,” a State spokesperson said on Friday.

The only thing that is being directly denied are assertions by the Ukrainian Ministry of Internal Affairs adviser, who tweeted Friday that

“the US is preparing a plan to destroy the [Russian] Black Sea Fleet. The effective work of the Ukrainians on [Russian] warships convinced [the US] to prepare a plan to unblock the [Ukrainian] ports. Deliveries of powerful anti-ship weapons are being discussed.”

Pentagon spokesman John Kirby, asked about this at the briefing Friday, was adamant: “I can tell you definitively that that’s not true.” This unfortunately has the splitting hairs quality of the denial/non denial a couple of weeks ago when the Pentagon confirmed reports it was supplying targeting intelligence to the Ukrainian military but not specifically to sink Russian ships or kill its generals.

When asked whether the U.S. would be sending those anti-ship missiles, Kirby was more ambiguous:

We are — we are talking to the Ukrainians every day, as you know in fact, today’s another one of those days when the Secretary is going to talk to Minister Reznikoff about — we talked to them about their needs and our capabilities. And when we have decisions, we come right out here and we issue a press release and we tell you about that. So, I’m not going to get ahead of decisions that haven’t been made. We’re doing the best we can to meet their — their capabilities in as near real-time as we can. And we keep trying to make those capabilities match what’s going on on the ground. And what’s going on on the ground right now is a very artillery heavy, long-range fire heavy fighting in the Donbas.

According to Friday’s report from Reuters, the U.S. is considering sending shorter range Harpoon anti-ship missiles, or the newer, longer range Naval Strike Missile, which can be launched from the coast and has a range of over 100 nautical miles. This missile is made by Norwegian company Kongsberg Defence & Aerospace, but the company has teamed up with Raytheon for a more advanced application for the U.S. Navy.

The Washington response to the Reuters report has been tempered — we are dedicated to giving the Ukrainians everything they need. But the Ukrainian interpretation — the U.S. plans to destroy the Russian’s Black Sea fleet — is what the Russians are likely hearing. Moscow so far, has responded moderately: “You know, many weapons are being supplied to Ukraine from the West. And you know our attitude very well. There is nothing new about this,” said Russian presidential spokesman Dmitry Peskov on Friday. “The Russian military thoroughly monitors all these supplies and takes preventive measures.”

Also on Friday, Secretary of State Antony Blinken demanded that Russia lift its blockade of Ukraine’s Black Sea ports in order for the country to export food and fertilizer, the shortage of which are creating crises across the globe.

“The Russian government seems to think that using food as a weapon will help accomplish what its invasion has not – to break the spirit of the Ukrainian people,” he said at the meeting called by the Biden administration. For their part, the Russians say they are willing to deal, as long as Western-imposed sanctions on Moscow are on the table.

Friday’s news indicates that Washington is edging closer to giving Zelensky more of what he has wanted in terms of long-range, heavy artillery and away from its insistence that the U.S. is averse to a more direct confrontation via proxy war with Russia. In that same Reuters’ report, sources said M270 or a similar rocket system like the M142 HIMARS would be considered for shipment to Ukraine once Congress passed a $40 billion supplemental funding bill.

Pushing forward with these more advanced weapons increases the odds of a wider war dragging NATO into the fray, and worse, nuclear conflict. If the U.S. has not yet decided to take this up a notch with anti-ship missiles, officials may want to consult more temperate voices before it reaches the point of no return. From my colleague Anatol Lieven:

US anti-ship missiles can do enormous damage to Russia’s Black Sea fleet; but they will not break the Russian naval blockade of Ukraine, because Russia has anti-ship missiles of its own, as well as air superiority, with which it can sink or intimidate ships trying to enter or leave Ukrainian ports. For the USA to break the blockade would mean deploying US warships as convoy escorts (as in the Persian Gulf during the — which would bring America into direct military confrontation with Russia.

This seems like the transfer of anti-ship missiles could set us on a slippery slope that Washington should want to avoid.

3 thoughts on “Is the US Preparing a Plan to destroy Russia’s Black Sea Fleet?”