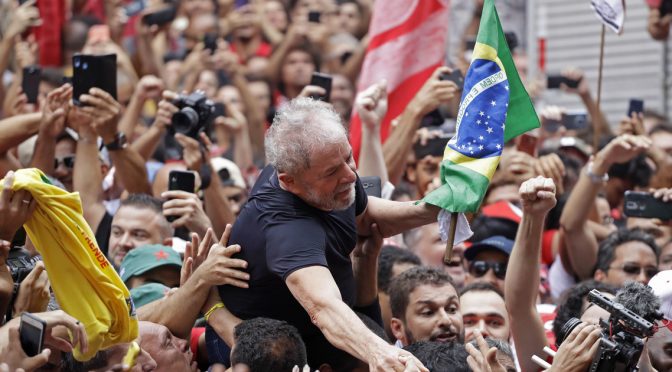 Brazil’s next presidential elections will take place in October this year and two of its most popular participants: Jair Bolsonaro (current Brazilian president) and Luiz Inacio (Lula) da Silva are expected to be the strongest contenders for winning it. In such a scenario, what could be the effects for BRICS in case either Bolsonaro or Lula wins the presidential race?

In order to attempt an answer to that question, it is essential to understand the difference between both contenders in terms of their policy attitudes during their presidency.

First of all, one must consider the most evident positions of BRICS over the years in order to comprehend the group’s view on world affairs. In this regard, as far as analyses of BRICS documents are concerned, it is possible to highlight the following points concerning the group’s understanding of international relations:

• The world should be Multipolar, without any form of Superpower dominance and global politics should be defined by different centers of economic, political and civilizational influence.

• The world order should be based on the rule of international law and traditional mechanisms of global governance should become more representative of current day’s realities, considering the increasing role of emerging economies.

• The architecture of financial governance should be reformed in order to empower developing economies, with responsibilities and voting power at institutions such as the World Bank and especially the IMF being rearranged to increase their legitimacy.

Since its inception “BRICS [has] presented and made itself a vector for changing global governance, acting by soft balancing the global hegemonic powers”. Brazil, meanwhile, has traditionally being considered ‘a responsible Regional Power’ in Latin America, one that shares the importance of upholding multilateral values in order to solve acute problems of international life. BRICS, therefore, became an important political platform for Brazil because it facilitates:

• the country`s advocacy of multilateralism and plurality in world affairs;

• the possibility of reforming international monetary and financial institutions;

• the country’s discourse against Western hegemonism, through concertation with other important emerging economies.

In view of the aforementioned, we shall move to a brief analysis of the political attitudes of both Bolsonaro and Lula during their presidencies. In the first years of Bolsonaro’s government, his first-appointed Minister of Foreign Affairs, Ernesto Araujo, believed that Brazil should question the relevance of BRICS, focusing instead on the creation of a “nationalist coalition of countries”, including the United States, Brazil, Italy, Russia and others, forming some sort of “antiglobalist BRICS without China”, with Bolsonaro and his associates demonstrating a relative contempt towards globalization and multilateralism, one of the main pillars of BRICS cooperation.

Meanwhile, Bolsonaro focused instead on Brazil’s political relations with the United States (especially during the Trump administration) and with Israel, thus alienating a number of Middle-Eastern and African States, as well as evoking some doubts about Brazil’s future engagement with BRICS. Notwithstanding, Bolsonaro’s government also witnessed diplomatic misunderstandings with China (the most prominent BRICS member and Brazil’s main trading partner) during the COVID-19 pandemic, since close associates to the president (as well as his son, Deputy Eduardo Bolsonaro) began to claim “that the Chinese had spread the virus across the world for economic and geopolitical reasons” much alike Trump’s discourse in the United States. Be it as it may, the BRICS summit of 2019 hosted by Bolsonaro was held successfully in Brasilia, with its final declaration bringing a section named ‘Strengthening and reforming the multilateral system’, where the group declared their intention to help «overcome the significant challenges currently facing multilateralism», in an implicit allusion to the growing trend of economic protectionism that was considered to ‘undermine international stability’.

Notwithstanding, after Trump (with whom Bolsonaro shared a similar political agenda) left the US presidency in 2021, being replaced by the Democrat Joe Biden, new challenges were put in place for the Brazilian leadership concerning the reorientation of country’s foreign policy. In view of these new international conjectures, Bolsonaro moved towards a relative rapprochement with BRICS partners, including China and Russia. In the case of China, the president’s administration (headed by Vice-President Hamilton Mourão) softened its tone towards Beijing in relation to the COVID-19 pandemic, as well as sought to keep Brazil’s strong commercial ties with the Asian country. Now when it comes to Russia, Bolsonaro not only sought to build closer ties between Brazilian and Russian businesses, but also openly manifested ‘solidarity’ with Russia (arguably referring to the Kremlin’s requirements towards NATO on the topic of safety guarantees) during his official to Moscow in February. Notwithstanding, after the outbreak of the Russian-Ukrainian conflict, Bolsonaro did not impose harsh sanctions against Russia, while at the same time refraining from criticizing Moscow’s actions in Ukraine and Vladimir Putin in particular.

Although pragmatic reasons might be behind Bolsonaro’s response to the crisis, such as supplying Brazilian agricultural products to the Russian Federation while widening bilateral trade (specially concerning fertilizers and chemicals imported from Russia), another important aspect that influenced Bolsonaro’s decision to not criticize the Russian leadership was his ideological like-mindedness in terms of traditional and conservative values with Vladimir Putin. Be it as it may, the [relative] easing of tensions with China and the recent rapprochement with Russia could indeed represent more promising perspectives for Brazil’s engagement with BRICS in the future in case Bolsonaro is reelected, or at least ‘better’ perspectives if compared with when he first came to power in 2018.

In the case of Lula (candidate from the Labor’s Party) and former Brazilian president (from 2003 to 2010), his possible election in October could represent a reinvigoration of Brazil’ political ties with Latin American and African countries (including South Africa), as well with BRICS itself, since both of these foreign policy vectors were paramount during his past presidency. Suffice it to say that: it was during Lula’s time that Brazil, India and South Africa (3 of the current 5 BRICS members) established the IBSA group, considered a ‘unique initiative to enhance South-South cooperation’ and the country`s international advocacy of ‘multilateralism’ and plurality in world affairs, while providing an alternative framework for discussions about global governance. Lula was also the leader ahead of Brazil during BRIC’s inception in 2009, which soon afterwards became an important political platform during his presidency.

Additionally, Lula’s successor, President Dilma Rousseff (2011-2016) [also from the Labor’s Party] continued Lula’s tradition of drawing attention to the imperative of eliminating «the disparity between the growing importance of developing countries in the global economy and their insufficient representation and participation in the decision-making processes of international financial institutions», a position that ran in line with that of other BRICS members. In effect, one of the guidelines of Brazilian foreign policy, present in its Constitution of 1988, is to narrow the gap between developed and developing countries, while the position traditionally held by Lula’s Labor Party, as stated by former president Dilma Rousseff, is that Brazil sees «multilateralism as the most efficient way to produce stable international consensus».

During Lula’s period, moreover, Brazil became one of the main suppliers of commodities to the China, which were fundamental for Beijing’s consistent economic growth during the 2000s. By that time, the diversification of Brazil’s political and commercial partnerships became a priority for the country’s diplomacy, which helped explain the importance acquired by China to Brazilian policy makers. In this respect, a possible victory of Lula in October can represent the continuation of Brazil’s solid bilateral relations with China, and probably a less troublesome one if compared with the initial years of Bolsonaro’s government. When it comes to the current Russian-Ukrainian conflict, Lula recently said in an interview to the journal ‘Time’ that the Ukrainian President Zelensky “is as responsible” as Putin for the crisis, a statement that caused a negative resonance in Brazil, but that seemed to demonstrate Lula’s intention to not alienate Russia, thus leaving the door opened for further cooperation with Moscow be it bilaterally or within BRICS.

To sum up, BRICS is still expected to represent an important political vector for Brazilian Foreign Policy in the future, albeit for different reasons depending on the candidate elected. In the case of Bolsonaro, BRICS can represent a platform for further approximation with Russian leader Vladimir Putin as well as with Narendra Modi (with whom Bolsonaro shares a somewhat similar nationalistic political undertone and repertoire), while serving as a welcome focus for the reorientation of his foreign policy, since Donald Trump left the US presidency.

For Lula, on the other hand, BRICS manifests of the most emblematic achievements of his past presidency, and therefore, one can expect the group to play a vital role for his foreign policy in the future, not only in terms of strengthening Brazil’s traditional multilateral diplomacy, but also as a means to consolidate South-South cooperation among Brazil, India and South Africa as well as the country’s political and economic close ties with China.