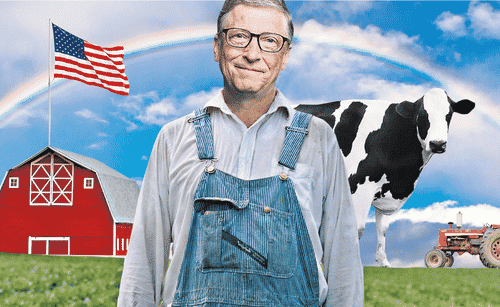 An entity with ties to billionaire Bill Gates bought 2,100 acres of potato farmland in northern North Dakota — prompting the state’s top prosecutor to intervene after complaints from local residents.

Public records cited by AgWeek show that the Gates-linked Red River Trust bought the farmland from the owners of Campbell Farms, a potato farming group that is headquartered in Grafton, North Dakota, which is about 50 miles from the Canadian border.

“I’ve gotten a big earful on this from clear across the state, it’s not even from that neighborhood,” said Goehring.

“Those people are upset, but there are others that are just livid about this.”

Gates, the billionaire tech mogul and philanthropist whose net worth was pegged by Bloomberg at $113 billion, has quietly amassed nearly 270,000 acres of farmland across the country, according to the Associated Press.

The Microsoft co-founder is considered the largest private owner of farmland in the country with some 269,000 acres across dozens of states, according to last year’s edition of the Land Report 100, an annual survey of the nation’s largest landowners.

The trustee of Red River Trust is Peter Headley, who identifies himself on his LinkedIn page as head of agriculture investment management at Investment Management Co. A 2020 article by NFU Mutual Charitable Trust claimed that Headley once headed an entity called “Cottonwood,” which was described as an “ag-investment platform” for Bill and Melinda Gates.

Earlier this week, North Dakota State Attorney General Drew Wrigley wrote a letter to Red River Trust, care of Headley, notifying it that corporations and limited liability companies were “prohibited from owning or leasing farmland or ranchland in the state of North Dakota.”

Wrigley wrote that these entities were also barred from “engaging in farming or ranching.”

“In addition, the law places certain limitations on the ability of trusts to own farmland or ranchland,” the letter said.

The land, most of which is non-irrigated, was transferred to Red River Trust on Nov. 2 and Nov. 3 of last year. Red River Trust filed paperwork with the office of the secretary of state of North Dakota on Feb. 15 of this year. The entity shares the same address as Campbell Farms.

The trust and Headley were given 30 days to respond to the letter.

“Our office needs to confirm how your company uses this land and whether this use meets any of the statutory exceptions, such as the business purpose exception, so that we may close this case and file it in our inactive files,” the letter says.

Gates, in an Ask Me Anything session on Reddit last year, said his “investment group” was behind the purchases, and suggested it was linked to seed and biofuel development.

“The agriculture sector is important,” he wrote. “With more productive seeds we can avoid deforestation and help Africa deal with the climate difficulty they already face. It is unclear how cheap biofuels can be but if they are cheap it can solve the aviation and truck emissions.”

According to the North Dakota Corporate or Limited Liability Company Farming Law, there are “certain exceptions, such as permitting registered family farms or allowing the use of the land for business purposes.”

Wrigley’s office said it had “come to our attention” that Red River Trust “may have acquired land for farming or ranching in Pembina County on Nov. 4, 2021.”

A corporation or LLC “found in violation” of the law has up to a year to divest itself from the land or face a penalty “up to $100,000,” according to the letter.

Bill Gates buying up this much farmland should alarm every American.